Have you ever taken a look at all the information that Google has collected about you over all these years? That is, of course, assuming you have a Google account, but that’s quite a given if you own an Android device and have privacy concerns overruled by convenience. And considering that GPS is a pretty standard smartphone feature nowadays, you shouldn’t be surprised that your entire location history is very likely part of the collected data as well. So unless you opted out from an everchanging settings labyrinth in the past, it’s too late now, that data exists — period. Well, we might as well use it for our own benefit then and visualize what we’ve got there.

Location data naturally screams for maps as visualization method, and [luka1199] thought what would be better than an interactive Geo Heatmap written in Python, showing all the hotspots of your life. Built around the Folium library, the script reads the JSON dump of your location history that you can request from Google’s Takeout service, and overlays the resulting heatmap on the OpenStreetMap world map, ready for you to explore in your browser. Being Python, that’s pretty much all there is, which makes [Luka]’s script also a good starting point to play around with Folium and map visualization yourself.

While simply just looking at the map and remembering the places your life has taken you to can be fun on its own, you might also realize some time optimization potential in alternative route plannings, or use it to turn your last road trip route into an art piece. Just, whatever you do, be careful that you don’t accidentally leak the location of some secret military facilities.

For quite a long while now, latitude and longitude has been the way humankind has navigated the globe. This is a perfectly workable system, but it’s a little overwrought for daily use by the layperson. What3Words seeks to provide a simpler solution.

The system is based on splitting the surface of the globe into a grid of 3 m x 3 m sections. This includes oceans and bodies of water. With the grid layed out, each section is given a name consisting of three English words strung together. For example, ///eggs.form.breakfast denotes a spot in the outskirts of Chengdu, China, while ///crops.cards.gifts is a good approximation of that spot where the Naked Cowboy hangs out in Times Square, New York.

Addresses in this format are written with three leading forward slashes, along with a dot between each word. An attempt has been made to only use uncontroversial words, as well as to make sure no crude addresses are created by awkward combinations. Don’t worry, we checked – but if you do find anything good, drop it in the comments below.

It’s a tool that’s been around for a while, but an interesting one nonetheless. It’s something that needs a wider societal acceptance to become truly useful; we imagine it could be good in a small social circle once everyone is familiar with it. It may yet catch on – only time will tell!

Maps can be a great way to get a message across when the data you’re dealing with affects people on a country’s population scale. [jwolin] works for a non-profit organization, and wanted a way to help people visualize the extent of their operations and the causes they deal with. To do that, he created a nifty smart map wall display.

The display consists of a world map cut out of MDF, and affixed to a brick wall. There’s also two 4K Samsung monitors included as part of the system. The top monitor displays headings to contextualise the data, while the bottom screen displays related full motion video. A series of DMX-controlled lights then shine on the world map in various configurations to highlight the area of interest.

The system requires delicate coordination to operate cleanly and smoothly. There are three Windows 10 computers in the system, one for each monitor and another for the world map. An AutoHotkey script runs on the first computer, which selects a random video, and then sends out a command over serial to an Arduino Nano. This Arduino nano then communicates with two others, which make sure the second screen and DMX lighting rig then play the correct matching sequences, in time with the main video. Special care is taken to ensure that transitions are as smooth as possible, with no gaps in between each sequence. The entire installation is simple to update just by uploading additional content to a Dropbox folder, a crucial touch to future proof the project.

It’s an eye-catching system that helps educate visitors as to the mission of the organisation. We’ve seen other innovative world-map displays, like this clock that highlights night and day around the world. Video after the break.

END_OF_DOCUMENT_TOKEN_TO_BE_REPLACED 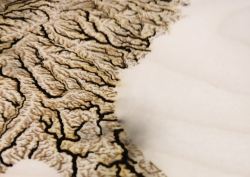 END_OF_DOCUMENT_TOKEN_TO_BE_REPLACED

If you solemnly swear that you are up to no good, and you happen to spend most of your time in Manhattan below the mid-90s, then you will appreciate this Raspberry Pi-based Manhattan Marauder’s Map.

Not that a Harry Potter-themed map was necessarily [GawkyFuse]’s intention when creating this interesting build; it’s just that the old-time print of Manhattan — it shows Welfare Island in the East River, which was renamed Roosevelt Island in 1971 — lends a nice vintage feel to the build. Printed on plain paper, the map overlays a 64×32-LED matrix, which is driven by a matrix HAT riding atop the Pi 3.

[GawkyFuse] uses the OwnTracks app on his and his wife’s iPhone to report their locations back to CloudMQTT. The Pi subscribes to the broker and updates his location in red and her location in blue as they move about the city; a romantic touch is showing a single purple dot when they’re together. There’s no word on what’s displayed when either leaves the map area, but the 2048-pixel display offers a lot of possibilities.

We’ve seen a Weasley clock or two around these parts before, but strangely no Marauder’s Maps like this one. Although this Austrian tram-tracking map comes pretty close to [GawkyFuse]’s nice design.

END_OF_DOCUMENT_TOKEN_TO_BE_REPLACED

Public transit can be a wonderful thing. It can also be annoying if the trains are running behind schedule. These days, many public transit systems are connected to the Internet. This means you can check if your train will be on time at any moment using a computer or smart phone. [Christoph] wanted to take this concept one step further for the Devlol hackerspace is Linz, Austria, so he built himself an electronic tracking system (Google translate).

[Christoph] started with a printed paper map of the train system. This was placed inside what began as an ordinary picture frame. Then, [Christoph] strung together a series of BulletPixel2 LEDs in parallel. The BulletPixel2 LEDs are 8mm tri-color LEDs that also contain a small controller chip. This allows them to be controlled serially using just one wire. It’s similar to having an RGB LED strip, minus the actual strip. [Christoph] used 50 LEDs when all was said and done. The LEDs were mounted into the photo frame along the three main train lines; red, green, and blue. The color of the LED obviously corresponds to the color of the train line.

The train location data is pulled from the Internet using a Raspberry Pi. The information must be pulled constantly in order to keep the map accurate and up to date. The Raspberry Pi then communicates with an Arduino Uno, which is used to actually control the string of LEDs. The electronics can all be hidden behind the photo frame, out of sight. The final product is a slick “radar” for the local train system.