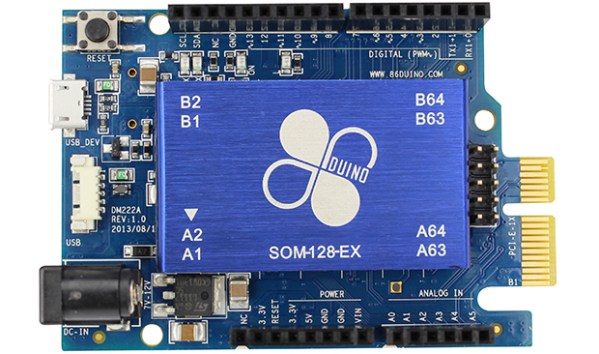 Every week the Hackaday tip line receives an email about a new dev board. The current trend is towards ARM devices, and only once have we seen an x86-based device. Today that count went up to two. It’s called the 86Duino and stuffs an old Pentium II-class machine capable of running DOS, Windows, and Linux into the space of an Arduino,

The 86Duino Zero features, of course, an x86 Vortex86EX processor running at 300 MHz. This board also features 128 MB of RAM, 8MB of Flash and the usual compliment of Arduino pins in a Leonardo-compatible layout. Also on the SoC is a PCIE bus, Ethernet, a USB 2.0 host, and an SD card. There’s a lot of stuff on this board for such a small size.

Compared to the gigahertz-fast ARM boards around, the 86Duino isn’t really that fast, but that’s not the point. There’s obviously a market for extremely tiny x86 boards out there as evidenced by the Intel Galileo, and this board is $30 cheaper than the Intel offering.

There’s no video out on this board, so someone will have to figure out how to attach a graphics card to the PCIE connector before we build a miniaturized old school DOS gaming rig. Still it’s a very neat piece of hardware. If you need to have it now, here’s a vendor.

Thanks [sohaib] for sending this one in.

A few weeks ago [Jacob Merz] sent me an email about his sensory expansion project, which allows the wearer to “hear” infrared light by mapping it to specific tones. Although a rough prototype, [Jacob’s] device reflects a larger realm of technological possibilities: the development of a type of “peripheral” for the human body. EDIT: Updated gallery to include new photos and added link to Jacob’s new site.

You’re going to want to listen to [David Eagleman’s] TEDx Alamo talk particularly around 10 minutes in, where he talks about the sonic glasses.  [Eagleman] claims that the human brain, if given a consistent input that corresponds to the real world, can decipher the signal into usable information. The sonic glasses, which provide a type of sonar to the blind wearer, eventually just…work. Your brain can “learn” its own drivers for input devices.

END_OF_DOCUMENT_TOKEN_TO_BE_REPLACED 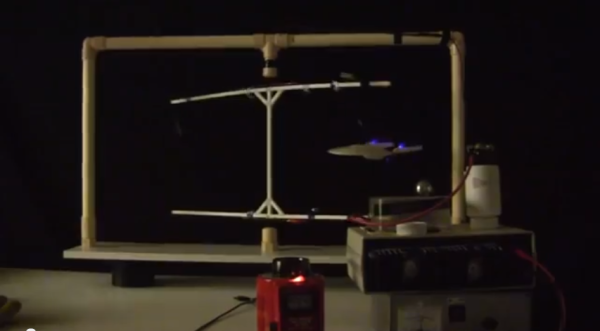 [Steven Dufresne] recently demonstrated ion propulsion using high voltage, and someone pointed out it kind of looked like the warp drives on the Star Trek Enterprise… so he went out and bought a model Enterprise and rebuilt his demonstration!

His original video on Ion Winds gives a good summary of the beginning of his experiments. In fact, it’s actually a recreation of a design he saw at the International Symposium on New Energy back in 1996 of the Electrokinetic Apparatus which was patented in 1960.

By creating a high voltage arc of electricity, it appears that the resulting “ion wind” propels the Enterprise with respect to the fixed testing apparatus. Did we mention he made the high voltage power supply himself?

[Steven] also points out that the propulsion might be occurring due to dielectrophoresis, but hasn’t discovered any conclusive evidence to prove that. Even the patent is rather vague on how this works:

The invention utilizes a heretofore unknown electrokinetic phenomenon which I have discovered; namely, that when a pair of electrodes of appropriate form are held in a certain fixed spaced relation to each other and immersed in a dielectric medium and then oppositely charged to an appropriate degree, a force is produced tending to move the pair of electrodes through the medium.

Regardless of how or why it works, it’s a fun video to watch, so make sure you stick around after the break to see it!

END_OF_DOCUMENT_TOKEN_TO_BE_REPLACED

Holy cr*p guys… we were amazed by the quantity of positive feedback that was left in the comments section of our last article. We have been featured by Slashdot ! We got plenty of project name suggestions, therefore we organized a poll located at the end of this post to let you decide which one is best. I also received many emails from people eager to start contributing to this offline password keeper project. If you missed the call and want to get involved, it’s still not too late. You can get in touch with me @ mathieu[at]hackaday[dot]com. So far, we have many beta testers, several software developers, one security assessor and a few firmware developers. Next step is to create a mailing list and a Hackaday forum category once the project’s name has been chosen.

Obviously, the very first post of our “Developed On Hackaday” series was to gauge your initial reactions to this ‘new’ project. Notice here the double quotes, as when someone has a new idea there usually are only two possibilities that may explain why it doesn’t exist in the market yet: either it is completely stupid or people are already working on it. In our case, it seems we are in the second category as many readers mentioned they wanted to work/were working/had worked on a similar product. As we’re selfish, we offered them to contribute to this new device.

To ensure that all of our readers are on the same page as to how the device will work we embedded a simple block diagram after the break, as well as a list of all new functionalities that we want to implement given the feedback we received. So keep reading to see what the future holds, as well as to vote on this new project’s name…

END_OF_DOCUMENT_TOKEN_TO_BE_REPLACED

Recently, Google discovered that a certificate authority (CA) issued forged certificates for Google domains. This compromises the trust provided by Transport Layer Security (TLS) and Secure HTTP (HTTPS), allowing the holder of the forged certificates to perform a man-in-the-middle attack.

To validate that the website you’re visiting is actually who they claim to be, your browser ensures that the certificate presented by the server you’re accessing was signed by a trusted CA. When someone requests a certificate from a CA, they should verify the identity of the person making the request. Your browser, and operating system, have a set of ultimately trusted CAs (called root CAs). If the certificate was issued by one of them, or a intermediate CA that they trust, you will trust the connection. This whole structure of trust is called a Chain of Trust.

With a forged certificate, you can convince a client that your server is actually http://www.google.com. You can use this to sit between a client’s connection and the actual Google server, eavesdropping their session.

In this case, an intermediate CA did just that. This is scary, because it undermines the security that we all rely on daily for all secure transactions on the internet. Certificate pinning is one tool that can be used to resist this type of attack. It works by associating a host with a specific certificate. If it changes, the connection will not be trusted.

The centralized nature of TLS doesn’t work if you can’t trust the authorities. Unfortunately, we can’t. 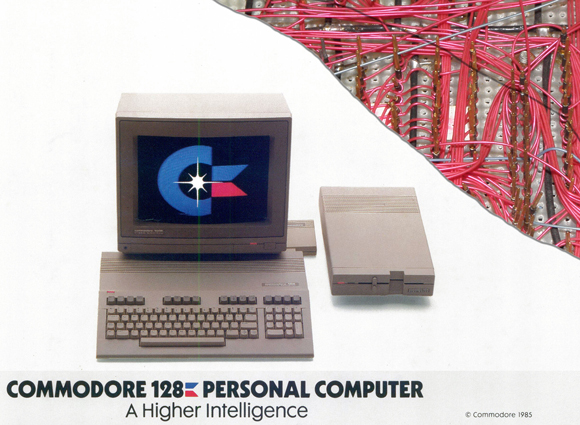 The most popular computer ever sold to-date, the Commodore C-64, sold 27 Million units total back in the 1980’s.  Little is left to show of those times, the 8-bit “retro” years when a young long-haired self-taught engineer could, through sheer chance and a fair amount of determination, sit down and design a computer from scratch using a mechanical pencil, a pile of data books, and a lot of paper.

My name is Bil Herd and I was that long-haired, self-educated kid who lived and dreamed electronics and, with the passion of youth, found himself designing the Commodore C-128, the last of the 8-bit computers which somehow was able to include many firsts for home computing. The team I worked with had an opportunity to slam out one last 8 bit computer, providing we accepted the fact that whatever we did had to be completed in 5 months… in time for the 1985 Consumer Electronics Show (CES) in Las Vegas.

We (Commodore) could do what no other computer company of the day could easily do; we made our own Integrated Circuits (ICs) and we owned the two powerhouse ICs of the day; the 6502 microprocessor and the VIC Video Display IC.  This strength would result in a powerful computer but at a cost; the custom IC’s for the C-128 would not be ready for at least 3 of the 5 months, and in the case of one IC, it would actually be tricked into working in spite of itself.

END_OF_DOCUMENT_TOKEN_TO_BE_REPLACED The Fubarino Contest entries are slowing streaming in. Here’s the first one that we’re featuring, sent in by [Nathanael Wilson]. He dusted off a project from some time ago, which is just fine with us. It’s a Morse Code transmitter which he designed for use during a fox hunt (locating a hidden transmitter using radio direction finding).

For the project he revised his old code, adding in a Morse look-up table so that the Arduino Mega 2560 can convert plain text into dots and dashes. It uses the tone library to output signals to the radio seem above. The easter egg is unlocked when shorting pin 10 at power-up. It then broadcasts a slightly altered message as interpreted above.

One of the reasons we chose to feature [Nathanael’s] entry first is that he presented it very well. Watch his video after the break to see for yourself. Then go back and check out the contest rules to get your own project submission in. After all, you can win a free Fubarino board from Microchip if you’re in the top twenty!