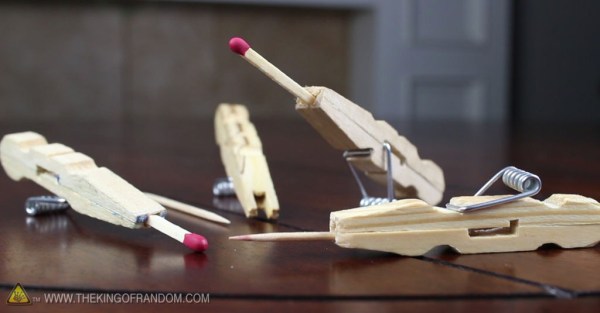 Looking for a quick fun little project you can do for next to nothing? Why not make your own matchstick/toothpick launcher!

[Grant Thompson] the [King of Random] is at it again with another fun project that anyone can do — we just hope you’re responsible with it! All you need is some clothespins, a utility knife, and some form of munition — we like the flaming matches!

By cutting a few grooves into the clothespin, gluing it back together and re-configuring the spring layout, you can make a formidable mini-gun that can shoot upwards of 20 feet. Using a pointy toothpick it will skewer innocent fruits quite effectively too!

To see it in action and to learn how to make one yourself, stick around after the break.

END_OF_DOCUMENT_TOKEN_TO_BE_REPLACED Keys? Who needs them? Well, pretty much everyone. You can’t deny that there are some ridiculously crowded key chains out there. It’s clear that [Robb] wanted to hit the other side of that spectrum when he started working on his latest multi-key project.

The term “multi-key” may be a little misleading as there are more than just keys on this tool. In addition to the bike lock, locker, work and house keys, there is a USB drive, bottle opener, screw driver and a couple of Allen wrenches. The side frames started out as part of an Allen key combo set; one not of the highest quality.  The Allen keys started snapping off during use which left [Robb] with a set of otherwise useless side frames. These became the platform of which [Robb’s] project is based. Adding a couple new bolts, nuts and a few modified keys got him the rest of the way there. A lot of thought went into which items to put into this tool and [Robb] explains his thought process in his step-by-step instructions.

The simple nature and potential for customizing makes this a great utilitarian DIY project. Although this may not be Janitor worthy, it will certainly consolidate some of the bulk in our pockets.

As anyone with a Facebook account that’s over the age of 25 will tell you, 3D ultrasounds of fetuses are all the rage these days, with ultrasound pictures of the unborn recently taking the leap from black and white blobs to 3D – and 4D – images. With the advent of 3D printers, the inevitable has happened. Now you can order a 3D print of your yet-to-be-born progeny.

Despite the ‘creepy’ factor of these little bundles of plastic, we’re wondering why we haven’t seen anything like this before. Are there any obstetricians/radiologists/ultrasound techs out there that have experience with importing 3D ultrasound data into an editor of some sort? Notwithstanding any HIPAA violations, it seems it would be rather easy to turn this sort of 3D data into a printed object. 3D printing CT scans models can’t be the only other instance of this type of thing.

Thanks [Will] for the nightmares