As kids we’ve all let a friend use a toy only to have it returned broken. That was such a bummer! At least that was years ago though…. well not for [Tom]. He had a Hubsan X4 mini quadcopter that he had crashed into all sorts of things. The little quad held up good against all of the beatings so [Tom] didn’t think too much about letting his pal take it for a test drive. Thirty seconds later, several separate pieces of the quad were laying in the dirt.

A new X4 was ordered but there was some time to kill waiting for it to show up. Since the electronics seemed to be intact and only the frame was broken [Tom] decided to try his hand at making a new frame. Keeping costs under control is an important part of any project and this one was no different. The frame would be made of cheap and rigid 5mm plywood. The only potential problem would be the weight. [Tom] cut out a piece of the plywood and weighed it, then measured the volume and calculated the density of the wood. The wood’s density was used to estimate the final weight of new plywood frame designs and shapes. This worked so well that the newly built quad only weighed more than the original by 0.31 grams, less than 1% increase in the total weight!

END_OF_DOCUMENT_TOKEN_TO_BE_REPLACED

[Zenios] and [Raivis] are building a small balancing robot, and for communications to the outside world, they’re using a small, extremely cheap Bluetooth adapter. They figured uploading code to the microcontroller over Bluetooth would be a good idea, but their adapter, a cheap HC-06 module, had no way of resetting the microcontroller; it just provided Tx and Rx the serial port. They did notice a LED blinked when a device wasn’t connected to the adapter, so with a simple circuit they kludged a reset circuit where it wasn’t intended.

The small LED on the HC-06 module blinks when nothing is connected, and remains on when a connection is established. Figuring a new connection would be a good time to upload new code, the guys needed to design a circuit that would stay low when the LED was blinking, and switch to high when the LED was on.

After a few small changes to the bootloader, the guys had a reliable means of flashing new firmware without the need of programming adapters or wires draped over their workspace, all with a Bluetooth adapter that shouldn’t have this capability. Video below.

END_OF_DOCUMENT_TOKEN_TO_BE_REPLACED 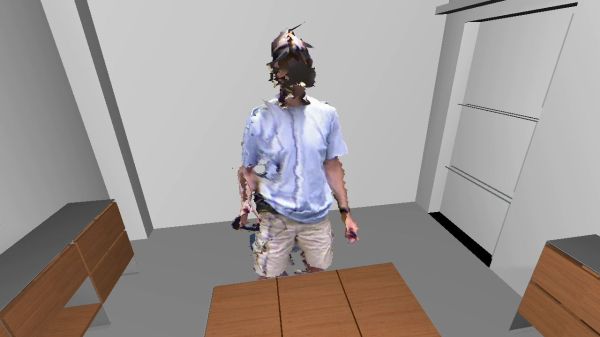 No, that isn’t a scene from a horror movie up there, it’s [Oliver Kreylos’] avatar in a 3D office environment. If he looks a bit strange, it’s because he’s wearing an Oculus Rift, and his image is being stitched together from 3 Microsoft Kinect cameras.

[Oliver] has created a 3D environment which is incredibly realistic, at least to the wearer. He believes the secret is in the low latency of the entire system. When coupled with a good 3D environment, like the office shown above, the mind is tricked into believing it is really in the room. [Oliver] mentions that he finds himself subconsciously moving to avoid bumping into a table leg that he knows isn’t there. In [Oliver’s] words, “It circumnavigates the uncanny valley“.

Instead of pulling skeleton data from the 3 Kinect cameras, [Oliver] is using video and depth data. He’s stitching and processing this data on an i7 Linux box with an Nvidia Geforce GTX 770 video card. Powerful hardware for sure, but not the cutting edge monster rig one might expect. [Oliver] also documented his software stack. He’s using Vrui VR Toolkit, the Kinect 3D Video Capture Project, and the Collaboration Infrastructure.

We can’t wait to see what [Oliver] does when he gets his hands on the Kinect One (and some good Linux drivers for it).

END_OF_DOCUMENT_TOKEN_TO_BE_REPLACED

[MrCircuitMatt] has been doing a lot of radio repair recently, quickly realized having a spectrum analyzer would be a useful thing to have. Why buy one when you can build one, he thought, and he quickly began brushing up on his RF and planning out the design of a 1000 MHz spectrum analyzer

The project is based on Scotty’s Spectrum Analyzer, a sweep-mode, modular 1GHz spectrum analyzer that is, unfortunately, designed entirely in ExpressPCB. [Matt] didn’t like this proprietary design software tied to a single board house. The basic building blocks of [Scotty]’s spectrum analyzer were transferred over to KiCAD, the boards sent off to a normal, Chinese board house.

In the second video, [Matt] goes over the design of the control board, a small module that connects the spectrum analyzer to the parallel port of a PC. There’s a lot of well thought out design in this small board, a good thing, too, since he’s powering his VCO with a switched mode supply. The control board has a 32-bit I/O, so how’s he doing that with a parallel port, what is ultimately an 8-bit port? A quartet of 74ACT573, a quad buffer with latch enable. Using the eight data lines on the parallel port allows him to toggle some pins while the ancient pins on the parallel bus – Strobe, Select Printer, and Line Feed control the latches on each of the buffers. This gives him the ability to write to 32 different pins in his spectrum analyzer with a parallel port.

Right now, [Matt] is wrapping up the construction of his control board, with the rest of the modules following shortly. He thinks the completed analyzer might even be cheaper than a professional, commercial offering, and we can’t wait to see another update video.

END_OF_DOCUMENT_TOKEN_TO_BE_REPLACED Do you need an idea for a fun do it yourself gift for a friend or significant other? Look no further, [conductance] has you covered. He put together an awesome electronic puzzle box using all analog electronics. The puzzle case is shaped like an over sized die and is made out of wood. It also requires a small jumper cable and an external magnet to complete the puzzle.

This is a six-sided die, where each side has something different to offer. The “five” side of the die shows the progress you’ve made in completing the puzzle. Each of the five dots contains a green LED that will light up when the corresponding puzzle has been successfully completed.

The “one” side is completed by placing the included magnet over the dot. The magnet activates a reed switch which lights up the first LED. The “two” side contains a tilt switch. In order to solve this piece of the puzzle you must ensure the two side is facing up, as if you rolled a two. The “three” side contains three key switches. Each switch must be turned to a particular orientation. Once all three keys are configured properly, a third LED lights up.

The “four” side contains four sockets that fit the included jumper cable. This puzzle is solved by jumping the two correct sockets together. Finally, the number “six” side just has six momentary push buttons. All six buttons must be pressed simultaneously in order to light up the final LED. The tricky part is pressing all six buttons while simultaneously “rolling” a two in order to ensure the tilt switch is also activated.

Once all five LED’s are lit up, a relay is triggered which then activates a solenoid. The solenoid unlocks the door and reveals the prize. It’s always great to see electronics circuits like this that use all discrete components. This could have been accomplished any number of ways, but there’s something satisfying about a simple circuit that’s just right for the job. Be sure to check out [conductance’s] schematic if you want to see how this puzzle works.

The third issue of The Hacklet has been released. In this issue, we start off with a roundup on the Sci-Fi Contest which recently concluded. After seeing the many great hacks you came up with for that contest, we’re looking forward to seeing what you think of for The Hackaday Prize.

Next up, we take a look at two hacks that deal with switching mains, which is a feature that most home automation projects need. These high voltage switches can be dangerous to build, but one hack finds a safe and cheap way to do it. The next looks at building your own high voltage circuitry.

Finally, we talk about two laser hacks. The first is practical: a device for exposing resins and masks using a laser. The second is just a really big laser, built from hardware store parts. Who doesn’t like big lasers? We definitely like big lasers, and so does the FAA.

Looking for a unique way to add a nice metal inlay to finish off your project? [Ben Krasnow] shows us how using a CNC router, a bit of solder, and a lot of sand paper!

It’s actually a pretty simple job — Of course, that’s only if you have a CNC machine. [Ben] started by engraving his inlay using his handy CNC mill, and then sanding off any rough spots. He then filled the engraving with acid flux paste, got out his MAPP gas torch and started dripping solder into the piece. Once everything was covered, he started sanding it, from 60 grit all the way to 600 grit for a nice polished finish. The results speak for themselves.

An easier method of this could also be achieved using plastic and epoxy, instead of brass and solder. One of the biggest problems with the solder is bubbling, which can cause voids which will appear when you are sanding — so you might have to do a second pass with the solder.

[Ben Krasnow] is an interesting character. He’s sought out the perfect cookie, made his own CT scanner at home, explained the various heat treatments of steel — and even installed LEDs into his contact lenses just for kicks!