This week marks the twenty-five year anniversary of the demise of Commodore International. This weekend, pour one out for our lost homies.

Commodore began life as a corporate entity in 1954 headed by Jack Tramiel. Tramiel, a Holocaust survivor, moved to New York after the war where he became a taxi driver. This job led him to create a typewriter repair shop in Bronx. Wanting a ‘military-style’ name for his business, and the names ‘Admiral’ and ‘General’ already taken, and ‘Lieutenant’ simply being a bad name, Tramiel chose the rank of Commodore.

Later, a deal was inked with a Czechoslovakian typewriter manufacture to assemble typewriters for the North American market, and Commodore Business Machines was born. Of course, no one cares about this pre-history of Commodore, for the same reason that very few people care about a company that makes filing cabinets. On the electronics side of the business, Commodore made digital calculators. In 1975, Commodore bought MOS, Inc., manufacturers of those calculator chips. This purchase of MOS brought Chuck Peddle to Commodore as the Head of Engineering. The calculators turned into computers, and the Commodore we know and love was born.

END_OF_DOCUMENT_TOKEN_TO_BE_REPLACED

By now most of us have used a Raspberry Pi at some level or another. As a headless server it’s a great tool because of its price point, and as an interface to the outside world the GPIO pins are incredibly easy to access with a simple Python script. For anyone looking for guidance on using this device at a higher level, though, [Arun] recently created a how-to for using some of the Pi’s available communications protocols.

Intended to be a do-everything “poor man’s hardware hacking tool” as [Arun] claims, his instruction manual details all the ways that a Raspberry Pi can communicate with other devices using SPI and I2C, two of the most common methods of interacting with other hardware beyond simple relays. If you need to go deeper, the Pi can also be used as a full JTAG interface or SWD programmer for ARM chips. Naturally, UART serial is baked in. What more do you need?

As either a tool to keep in your toolbox for all the times you need to communicate with various pieces of hardware, or as a primer for understanding more intricate ways of using a Raspberry Pi to communicate with things like sensors or other computers, this is a great write-up. We also have more information about SPI if you’re curious as to how the protocol works. 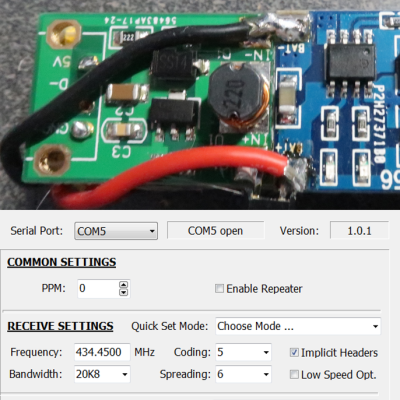 [Dave Akerman]’s interest in high-altitude projects means he is no stranger to long-range wireless communications, for which LoRa is amazingly useful. LoRa is a method of transmitting at relatively low data rates with low power over long distances.

Despite LoRa’s long range, sometimes the transmissions of a device (like a balloon’s landed payload) cannot be received directly because it is too far away, or hidden behind buildings and geography. In these cases a useful solution is [Dave]’s self-contained LoRa repeater. The repeater hardware is simple, and [Dave] says that if one has the parts on hand, it can be built in about an hour.

The device simply re-transmits any telemetry packets it receives, and all that takes is an Arduino Mini Pro and a small LoRa module. A tiny DC-DC converter, battery, and battery charger rounds out the bill of materials to create a small and self-contained unit that can be raised up on a mast, flown on a kite, or carried by a drone.

The repeater’s frequency and other settings can even be reprogrammed (using a small windows program) for maximum flexibility, making the little device invaluable when going hunting for landed payloads like the one [Dave] used to re-create a famous NASA image using a plastic model and a high-altitude balloon. Check out the details on the GitHub repository for the project and start mashing “add to cart” for parts at your favorite reseller.