Over the years we’ve seen KiCad grow from a niche, somewhat incomplete, but Open Source PCB design suite to a full-featured extravaganza of schematics and board layouts. We’ve plumbed the depths of keys and kais and queues and quays, and KiCad just had its first conference last weekend. While we wait for the rest of the talks to be published, there’s a special treat for KiCad users everywhere. Here’s a banana for scale.

Have you ever worried your PCB was too big? Confused if you’re working in inches or millimeters? Do you just want to know the scale of your PCB? Just add this footprint to your KiCad project, and you’ll have a banana on your board view. This is immediate visual feedback, giving you all the information you need to continue on with your design. There’s a 2D view and a 3D view. It’s something no electrical engineer should be without. All of this can be yours for the low, low, cost of free because KiCad is Open Source.

If you’re wondering what official features are in the works for the EDA suite, the first two talks from the con delve into that. project leader Wayne Stambaugh’s talk covers features new to version 5.1 and plans for 6.0. There was also a developers panel that provides insight on what goes into a large project like this one.

Do you even trickle?

[Eric] does, and like everything else about reloading, trickling is serious business. Getting an exact charge of powder to add to a cartridge is not a simple task, and very tedious when done manually. This smartphone-controlled auto-trickler is intended to make the job easier, safer, and more precise.

Reloading ammunition is a great way for shooters to save money and recycle the brass casings that pile up at the end of a long day at the range. It can be a fairly simple process of cleaning the casings, replacing the spent primers, adding the correct powder charge, and seating a new bullet. It’s all pretty straightforward, but the devil is in the details, especially with the powder charge. A little too much can be a big problem, so tricklers were invented to allow the reloader to sneak up on the proper charge. [Eric]’s auto-trickler interfaces to a digital powder scale and uses a standard cell phone vibration motor to gently coax single kernels of powder from a hopper until the proper charge has accumulated. It’s easier to understand by watching the video below.

The hardware behind the trickler is pretty standard — just a Raspberry Pi Zero to talk to the smartphone UI via Bluetooth, and to monitor and control the scale via USB. [Eric] has made all the code open source so that anyone can build their own auto-trickler, which we applaud; he did the same thing with his rifle-mounted accelerometer. This project might have applications far beyond reloading where precision dispensing is required.

END_OF_DOCUMENT_TOKEN_TO_BE_REPLACED

Retro computer fans come in all shapes and sizes. Some like the big name machines from the dawn of the home computer era, others like collecting quirky pieces like early laptops and handheld devices. Even more obscure are those who choose to collect old mainframe hardware. This can be challenging, due to its relative obscurity and the limited resources available. [skaarj] is just one such fanatic, however, and has begun creating a PERTEC tape drive emulator for his Cold War era mainframe.

For those of us who didn’t work in industrial computing back in the 1980s, the PERTEC interface is an unfamiliar beast. It became somewhat of a defacto standard for connecting tape drives to mainframes. [skaarj] aims to understand and emulate this interface, creating a device with a full suite of capabilities. The PERTEC Whisperer is intended to be capable of reading and writing from PERTEC tape drives, including dumping tapes to an integrated SD card. The device will also be able to emulate a drive when connected to a mainframe.

Thus far, the adventure has already netted some successes. [skaarj] learned useful tricks, like rewinding a 9-track Qualstar 1260 with VHS tape, and how to pull apart the protocols involved using an old-school HP1662 logic analyzer. We can’t wait to see where the project goes next, and it might just have us hunting for a mainframe to call our very own. 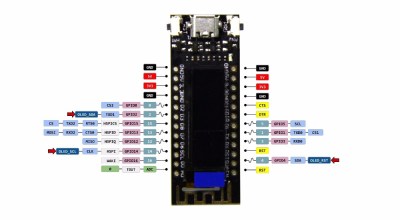 END_OF_DOCUMENT_TOKEN_TO_BE_REPLACED

Year on year, microcontrollers and development platforms are shipping with ever-increasing feature sets. In the distant past, if you wanted an analog to digital converter or a PWM driver, you had to tack extra ICs on to your design. Nowadays, it’s all baked in at the factory. Of course, you may still find yourself working with a platform that lacks capacitive touch inputs. That’s no problem, though – you can do it all without dedicated hardware anyway!

Capacitive touch sensing works by creating an RC oscillator, and allowing the user to affect the capacitance in the circuit through touch or proximity. By sensing the changes in the frequency of the oscillator, it’s possible to determine whether the object or pad is being touched or not. As the capacitance changes can be small, sometimes it’s desired to use a high frequency oscillator, and then pass the output through a frequency divider, which allows changes to be measured more easily by a slower microcontroller.

[Gabriel] does a great job of both explaining the theory involved, as well as presenting a practical way to achieve this with basic hardware. If you need to add touch sensitivity to an existing or otherwise limited platform, this is an easy way to go about doing it. There are definitely some interesting things you can do with the technology, after all.