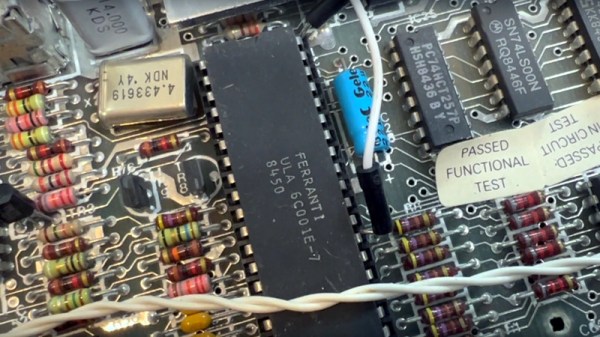 It’s normal for a computer in 2022 to come with a fully-featured sound card containing a complete synthesizer as well as high-quality PCM sound recording and playback. It’s referred to as a sound card after the way the hardware first appeared in the world of PCs, but in fact it’s now considered so essential as to be a built-in part of most mainboards. There was a time when computers boasted considerably less impressive sound hardware, and among the chorus of SIDs and AY chips of the perhaps the least well-featured was the original Sinclair ZX Spectrum. Its one-bit sound, a single line on an I/O port, is the subject of a thorough investigation from [Forgotten Computer]. It’s a long video which we’ve placed below the break, but for those with an interest in 8-bit music it should make a for a fascinating watch.

For Sir Clive Sinclair the 1-bit audio must have been welcome as it removed the need for an expensive sound chip and kept the Spectrum to its low price point, but on the face of it there was little more it could do than create simple beeps using Sinclair BASIC’s built-in BEEP command. The video gives us an in-depth look at how interleaving and PWM could be used to create much more complex sounds such as the illusion of multiple voices and even sampled sounds. In particular his technique of comparing the audio output with its corresponding pin on the Sinclair ULA shows the effect of the machine’s simple low-pass filter, though the music was often so close to the edge of what the interface could do that aliasing sounds are often very obvious.

As he demonstrates the various ingenious techniques that game and demo developers used to extract performance from such limited hardware that could even try to compete with the more sophisticated machines even at the same time as their code was running whatever was on the screen, it’s difficult not to come away with immense respect for their skills. If you’ve ever experimented with computer audio then you should try hardware this simple for yourself.

END_OF_DOCUMENT_TOKEN_TO_BE_REPLACED 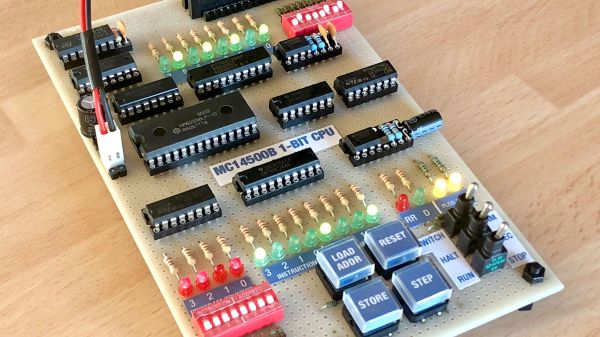 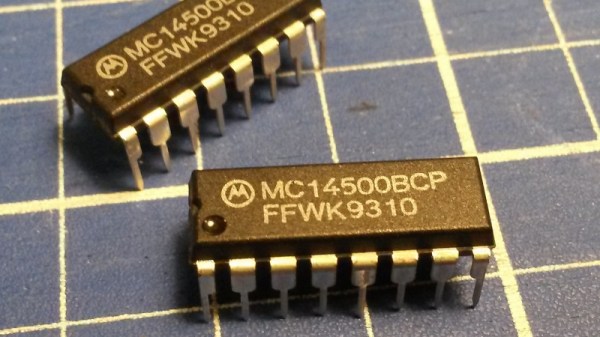 In the 1980s there was an impetus for the first time for young people to be equipped with computer literacy. A variety of different educational programmes were launched, typically involving a collaboration between a computer manufacturer and a broadcaster, and featuring BASIC programming on one of the 8-bit home computers of the day. One such educational scheme was a bit different though, the German broadcaster WDR produced an educational series using a modular computer featuring an unusual 1-bit processor that was programmed in hexadecimal machine code. [Jens Christian Restemeier] has produced a replica of this machine, that is as close to the original as he can make it. (Video, in German, embedded below.)

The computer is called the WDR-1, and had its origin in a kit machine before it was taken up by the broadcaster. The unusual 1-bit processor is a Motorola MC14500, which was produced from 1977 onwards for industrial control applications. He takes the viewer in the video below the break through the machine’s parts, explaining the purpose of each daughter card and the motherboard. Lacking an original to copy he instead worked from photographs to replicate the chip placements of the original, substituting pin headers for the unusual sockets used on the 1980s machines. Take a look at his video, below the break.

More information on the WDR-1 can be found online in German (Google translate link). Meanwhile we’ve featured the MC14500 before, in a small embedded computer.

END_OF_DOCUMENT_TOKEN_TO_BE_REPLACED

[Jeri] has had a bear of a time moving up to Valve Software, but electron microscope is safely in her garage (!) and her electronics lab is slowly taking shape. Since she can’t bring out the real-life gravity gun she’s working on, she decided to show off a one-bit ADC that uses just a flip-flop to sample an analog waveform  into digital data.

By toggling the clock input of a 74xx74 (or any flip-flop, really) and feeding the complimentary output to back into the data input, [Jeri] can get an output that is a 50% duty cycle feeding into the input of the chip. Adding an audio input to this data input with 10k pot to this feedback loop will cause the duty cycle to change in relation to the analog input, making a one-bit ADC.

As with any electronic shortcut, there are a few drawbacks: the clock cycle feeding into the flip-flop has to be pretty fast; at least a few dozen kilohertz if you’re sampling audio. Still, if you don’t have a free ADC pin, or you’d just like to build a bitcrushing guitar pedal, it’s a very simple (and cheap) way to get analog into a digital micro.

END_OF_DOCUMENT_TOKEN_TO_BE_REPLACED 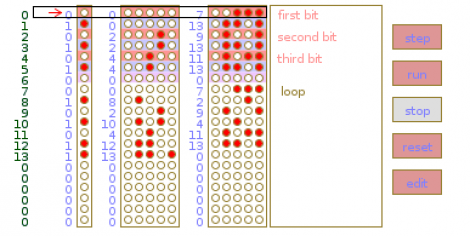 Put on that abstract thinking cap, get out the pen and paper, and spend some time figuring out how this one-bit processor works. [Strawdog] came up with the concept one day during his commute to work (don’t worry, he takes the train… much safer than [Dave Jones’] frightening drive-time podcasts). He sketched it out on paper to make sure he knew where he was going with the project, then collaborated with Legion Labs to implement it in processing as an easier way to visualize its functionality. Since it’s one-bit there’s only room for one instruction. That instruction is a copy, then branch-if instruction. It copies the current bit to one address, and if that bit was one, it branches to a second address.

Going a bit fast for you? We think the description is fairly good, but if you can’t quite put it together from the article’s description, you may want to build this 2-bit paper processor and learn how it works first. It should teach you the basic concepts you need to understand the 1-bit version. As you can see in the image above, there’s also a single-step feature in the processing example that lets you analyze the effects of each instruction during program execution.