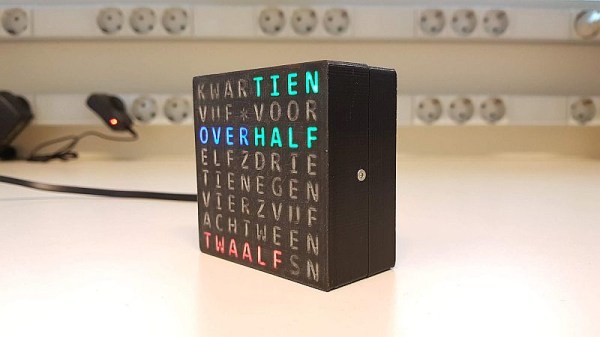 [Maarten Pennings] shares a word clock project – but not the regular kind. For a start, this clock is a shining demonstration of hobbyist-available 3D printing technologies, with embedded light guides for the letters printed in transparent filament, thanks to a dual-extruder printer. For a word clock, it’s surprisingly small – in fact, it uses an 8×8 addressable LED matrix, with words shown in different colors. If you’re looking to build a novel word clock, you’re all set here – [Maarten] tells all about this project’s story and provides a treasure trove of insights into designing all of its aspects!

The 8×8 limitation was initially set because he wanted to use a low-cost MAX7219 8×8 LED matrix module as a base for the clock. Thankfully, in Dutch, time can be expressed using shorter words — still, it had to be limited to 5-minute intervals. Extra effort had to be spent designing the layout — [Maarten] mentions his friend writing a solver that found a way to fit some words onto the layout diagonally. At some point, he switched from LEDs to Neopixels, and dug deep into addressable LED technology. For instance, he demonstrates Neopixel power measurements and current consumption calculations. This shows that the calculations indeed match the clock’s real consumption when measured by an external meter.

In the best of hacker traditions, all the source files are on Github — if you fancy yourself a Dutch word clock, you can build [Maarten]’s design easily! He provides extensive instructions on building this clock in the README, including a flashing and configuration tutorial, complete wiring diagrams, and a soldering guide. A manufacturing-grade amount of build information that won’t leave you guessing. He’s also added a fair number of animations, put plenty of effort into clock precision verification, and even investigated some Neopixel protocol minutiae. All in all, our hacker went all in on the capabilities while embracing the constraints. This reminds us of the similarly well-documented haptic word clock we covered just a year ago – check that one out, too!

END_OF_DOCUMENT_TOKEN_TO_BE_REPLACED 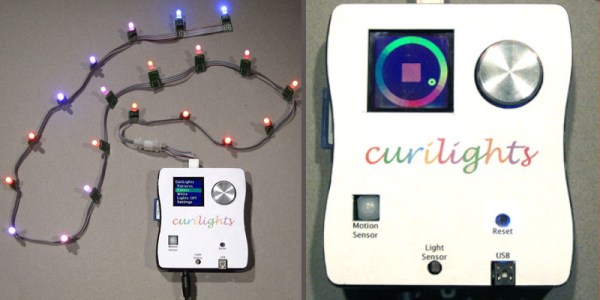 These days, addressable LEDs are all the rage. A little chip paired with each LED receives signals and modulates the light output as needed. [John Peterson] was working on a project along these very lines, designing his Curilights back in 2008!

[John] wasn’t the first to come up with the idea; he designed the Curilights to replicate a string of programmable LEDs he’d seen called Triklits. His design involved each RGB LED being fitted with a Microchip PIC 16F688 microcontroller, which could receive serial data and control the LED channels with PWM. These LEDs could then be strung up to create an addressable chain. It’s fundamentally the same concept as the WS2812, just in a larger format and built by hand. His design also had the benefit of non-volatile memory onboard the PICs, so animations could be stored even after power off. [John] later went on to build a controller for his lights, complete with sensors. It could be triggered by a motion sensor or light sensor, and would run animations on the string without the use of a computer.

While [John]’s design didn’t go on to bigger things or commercial success, it did win first place at the Third Annual Lantronix Wireless Design Contest. It also goes to show that many people will come around to the same idea when it makes good sense!

If you’re interested in the wider world of addressable LEDs, check out our breakdown on some of the products out there. Meanwhile, if you’re brewing up your own flashing, glowing projects, be sure to notify the tipsline! 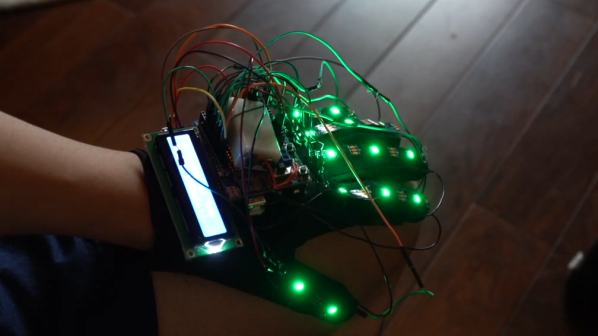 Since the 1980s, we’ve seen innumerable attempts to revolutionize the way we interact with computers. Since the advent of keyboards and mice, we’ve seen everything from magic wands to electric gloves, with [Deemo Chen]’s project fitting into the latter category.

The build takes on a cyberpunk aesthetic, with addressable LEDs installed along each digit. The various digits light up randomly, and the wearer of the glove must tap a button on the corresponding digit in order to test their reaction times. An Arduino Uno runs the show, and keeps track of the score, displaying the results on an attached HD44870-compatible LCD.

The mess-o’-wires aesthetic, with bare electronics hanging off the glove, goes a long way to making this look like a proper bit of sci-fi kit. The lurid, colorful glow is a key part of this look, and something we’ve seen on many projects over the years.

Overall, the reaction trainer served as a great freshman project for [Deemo], along with their chums [Dhruv] and [Ryan]. Along the way, the team clearly picked up skills in microcontroller programming, as well as learning how to work with LCD displays and addressable LEDs. Master these skills and you can pull off some impressive feats. Video after the break.

END_OF_DOCUMENT_TOKEN_TO_BE_REPLACED 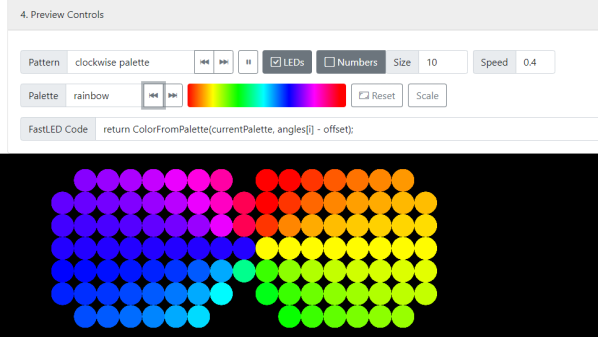 Addressable LED strings have made it easier than ever to build fun glowable projects with all kinds of exciting animations. However, if you’re not going with a simple grid layout, it can be a little difficult to map your strings out in code. Fear not, for [Jason Coon] has provided a tool to help out with just that!

[Jason]’s web app, accessible here. is used for mapping out irregular layouts when working with addressable LED strings like the WS2812B and others that work with libraries like FastLED and Pixelblaze. If you’re making some kind of LED globe, crazy LED tree, or other non-gridular shape, this tool can help.

The first step is to create a layout of your LEDs in a Google Sheets table, which can then be pasted into the web app. Then, the app handles generating the necessary code to address the LEDs in an order corresponding to the physical layout.

[Jason] does a great job of explaining how the tool works, and demonstrates it working with a bowtie-like serpentine layout with rainbow animations. The tool can even provide visual previews of the layout so you can verify what you’ve typed in makes sense.

It’s a great tool that we recently saw put to use on [Geeky Faye’s] excellent necklace project. Video after the break. END_OF_DOCUMENT_TOKEN_TO_BE_REPLACED

Addressable LEDs are wonderful things, with products like Neopixels making it easy to create all kinds of vibrant, blinking glowables. However, for those without a lot of electronics experience, using these devices can seem a bit daunting. [Bhavesh Kakwani] is here to help, with his tutorial on getting started with Neopixels using the MicroPython environment.

The tutorial flows on from [Bhavesh’s] Blink example for MicroPython, and is aimed at beginners who are learning for the first time. It explains the theory behind RGB color mixing that allows one to generate all manner of colors with WS2812B-based LED strings, and how to code for the Raspberry Pi Pico to make these LEDs do one’s bidding.

The guide even covers the use of the Wokwi simulation tool. This is a great way for beginners to test their projects before having to play with actual hardware. This is useful for beginners, because it’s a great way to catch mistakes – is there a software problem, or did they push the soldering iron through the microcontroller? It’s also a technique that pays dividends when working on more complicated projects.

Whether you’re entirely new to the embedded world, or just want to learn the intricacies of talking to addressable LEDs and make sense of color mixing theory, this tutorial will serve you well. Before you know it, you’ll be building glowing projects with the best of them!