This is a tale of old CPUs, intensive SMD rework, and things that should work but don’t.

Released in 1994, Apple’s Powerbook 500 series of laptop computers were the top of the line. They had built-in Ethernet, a trackpad instead of a trackball, stereo sound, and a full-size keyboard. This was one of the first laptops that looked like a modern laptop.

The CPU inside these laptops — save for the high-end Japan-only Powerbook 550c — was the 68LC040. The ‘LC‘ designation inside the part name says this CPU doesn’t have a floating point unit. A few months ago, [quarterturn] was looking for a project and decided replacing the CPU would be a valuable learning experience. He pulled the CPU card from the laptop, got out some ChipQuick, and reworked a 180-pin QFP package. This did not go well. The replacement CPU was sourced from China, and even though the number lasered onto the new CPU read 68040 and not 68LC040, this laptop was still without a floating point unit. Still, it’s an impressive display of rework ability, and generated a factlet for the marginalia of the history of consumer electronics.

Faced with a laptop that was effectively unchanged after an immense amount of very, very fine soldering, [quarterturn] had two choices. He could put the Powerbook back in the parts bin, or he could source a 68040 CPU with an FPU. He chose the latter. The new chip is a Freescale MC68040FE33A. Assured by an NXP support rep this CPU did in fact have a floating point unit, [quarterturn] checked the Mac’s System Information. No FPU was listed. He installed NetBSD. There was no FPU installed. This is weird, shouldn’t happen, and now [quarterturn] is at the limits of knowledge concerning the Powerbook 500 architecture. Thus, Ask Hackaday: why doesn’t this FPU work?

END_OF_DOCUMENT_TOKEN_TO_BE_REPLACED

[quarterturn] had an old Apple Powerbook 520c sitting around in his junk bin. For the time, it was a great computer but in a more modern light, it could use an upgrade. It can’t run BSD, either: you need an FPU for that, and the 520 used the low-cost, FPU-less version of the 68040 as its main processor. You can buy versions of the 68040 with FPUs direct from China, which means turning this old Powerbook into a BSD powerhouse is just a matter of desoldering and upgrading the CPU. That’s exactly what [quarterturn] did, with an unexpected but not surprising setback.

The motherboard for the Powerbook 500 series was cleverly designed, with daughter cards for the CPU itself and RAM upgrades. After pulling the CPU daughter card from his laptop, [quarterturn] faced his nemesis: a 180-pin QFP 68LC040. Removing the CPU was handled relatively easily by liberal application of ChipQuik. A few quick hits with solder braid and some flux cleaned everything up, and the daughter card was ready for a new CPU.

The new FPU-equipped CPU arrived from China, and after some very careful inspection, soldering, and testing, [quarterturn] had a new CPU for his Powerbook. Once the Powerbook was back up and running, there was a slight problem. The chip was fake. Even though the new CPU was labeled as a 68040, it didn’t have an FPU. People will counterfeit anything, including processors from the early 90s. This means no FPU, no BSD, and [quarterturn] is effectively back to square one.

That doesn’t mean this exercise was a complete loss. [quarterturn] did learn a few things from this experience. You can, in fact, desolder a dense QFP with ChipQuik, and you can solder the same chip with a regular soldering iron. Networking across 20 years of the Macintosh operating system is a mess, and caveat emptor doesn’t translate into Mandarin. 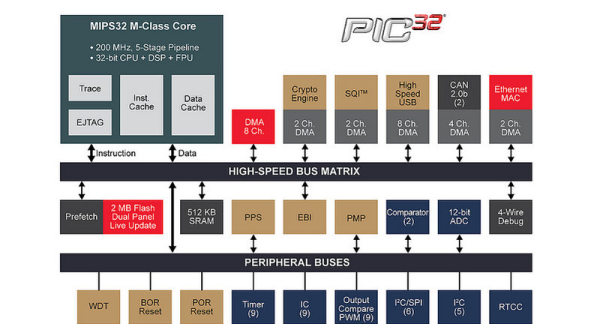 A few years ago [Serge Vakulenko] started the RetroBSD project–a 16-bit port of the old 2.11BSD operating system to the Microchip PIC32 microcontroller. This was impressive, but version 2 of BSD is, to most people, old news and somewhat difficult to use compared to modern BSD and Linux operating systems.

[Serge] has been at it again, however, and now has a port of 4.4BSD–LiteBSD–running on the PIC32MZ. According to [Alexandru Voica] there is about 200K of user space memory in the basic build, and by removing some OS features, you could double or triple that figure.

END_OF_DOCUMENT_TOKEN_TO_BE_REPLACED

As smartphones continue to get bigger and bigger, the race to have the smallest chip running Unix (or Linux, as the case may be) is still on. A new contender in this arena is [Serge] who has crammed RetroBSD on a Fubarino microcontroller for a powerful breadboard-friendly device.

The device uses a PIC32MX795 processor to run version 2.11BSD Unix for microcontrollers. It uses only 128 kbytes of RAM which is great for the limited space available, but it doesn’t skimp on software. It has a C compiler, assembler, and a whole host of other utilities that you’d expect to find in something much more powerful. All of this comes in a package that has breadboard-compatible pins so you can interface your Unix with the real world.

There’s a video below that shows the device in action, and a whole host of instructions that’ll get you up and running in no time if you have the hardware available. [Serge] mentioned that this would run on other architectures but is looking for others to join the project to port it to those processors. This isn’t the first time we’ve seen *nix installed on a microcontroller, but it is one of the more useful ones!

END_OF_DOCUMENT_TOKEN_TO_BE_REPLACED

Here’s an interesting bit of research to come out of Microsoft and UCSD. The Somniloquy project is a new type of network interface. It’s a USB device that allows a computer to continue network communications after being put to sleep. By offloading these tasks, machines that would normally stay awake for RDP and file transfers are only powered up when absolutely necessary. The device uses a Gumstix board like the one used in the Tor hardware adapter. The device pictured above has two USB interfaces, but the second is just for debugging and not needed for proper operation. The board runs BSD and creates a USBNet bridge to the Vista host. When the host daemon detects the computer going to sleep, it hands off active communication to the gumstix. They developed “stub” applications to handle the various types of communication. For downloads, they used wget to download only the portion of the data that was still left. For bittorrent, they customized the command line client ctorrent to manage the download. Both programs wake up the PC upon completion and transfer the file off of the SD card.

We’re putting a bounty on two high-priority Bus Pirate features. You can get a free PCB for the upcoming Bus Pirate V2 by writing a bit of code. Hack a Day has a varied and talented group of readers, and we know someone out there has the experience to make these changes with minimal difficulty.

The latest Bus Pirate code and compiled firmware can be checked-out from Google Code SVN. Submit your code via the comments below or buspirate@hackaday.com.

UPDATE: Both issues were resolved. Thanks for your suggestions.