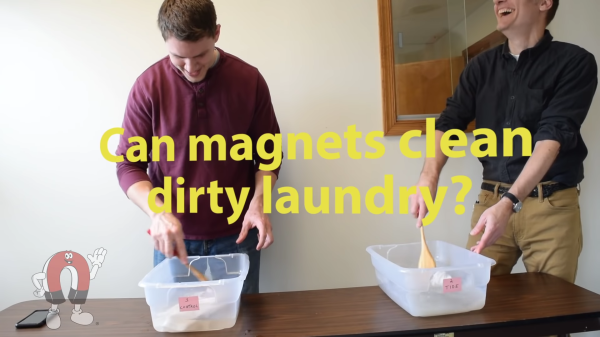 Soap cleans clothes better than magnets. There, we are spoiling the ending so don’t accuse us of clickbaiting. The funny thing is that folks believe this is plausible enough to ask magnets experts so often that they dedicate a blog entry to comparing magnets and soap. Since you already know how this ends, let’s talk about why this is important. Science. Even though some magnet retailers, herein referred to as [the experts] can easily dismiss this question as fanciful or ridiculous, they apply the scientific method to show that their reasoning is sound and clean evidence is on their side. [The experts] detail the materials and techniques in their experiment so peers may replicate the tests and come to the same results themselves. We do not doubt that the outcome would be equally conclusive.

The experiment includes a control group which processes dirty clothes without detergent or magnets, one group with only magnets, one group with only detergent, and one group with both. White clothing was soiled with four well known garment killers and manually agitated in a bin of warm water. We guessed that magnets would be on par with the control group, and we were pleased to be right. [The experts] now have a body of work to reference the next time someone comes at them with this line. The only question now is if tricky spouses used science to get nerds to do the laundry.

In this age of spin, keeping facts straight instead of jumping to heartfelt conclusions is more vital than ever. We are all potentially citizen scientists so testing a conspiracy is within everyone’s grasp.

END_OF_DOCUMENT_TOKEN_TO_BE_REPLACED 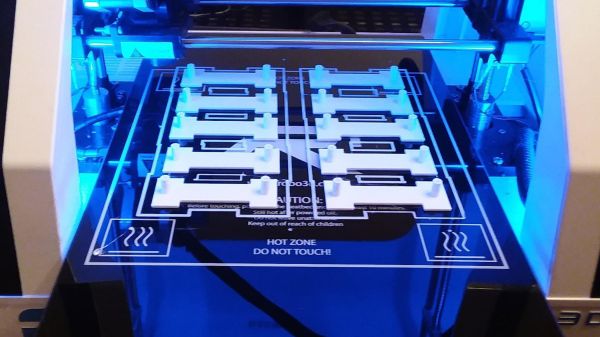 We are the culmination of our experiences. We build with the tools we’re familiar. We design with the decorations we like. Sometimes this thinking leads to a project that looks like a kindergartener who has dressed in a pink tutu and a camo shirt. Sometimes our experience leads us to make something functional and elegant. [jordanlund] combined his work experience in a library, 3D modeling skills, and love of comic books to turn a hodgepodge pile of scribbled-upon boxes into an orderly collection of comic books in boxes adorned with brass drawer pulls.

3D printing bridged the gap between the brass card catalog drawer pulls he knew well from the library and the crates of comics he kept at home. Custom brackets allowed the drawer pulls, which were meant to be screwed into wooden drawer faces, to work with cardboard boxes. The drawer pulls have a slot for labels so there will be no need to rip off sticky labels later or scrawl with a permanent marker. Perhaps [jordanlund] is merely a bibliophile with a 3D printer but if we didn’t know better, we might think those boxes were meant to have the drawer pulls installed.

Engage your own love of literature with this wordplay riddled appeal for libraries. or make your home library a little more fantasical with a secret door. If you want happy fish you’re going to need to do regular aquarium maintenance. Part of this is exchanging a portion of the tank’s water on a regular basis. [Bill Porter] came up with a water exchanger that means less manual labor, but makes the process just a bit more complicated.

So, what he would do before is fill a few buckets from the aquarium and dump them down the toilet. Then mix up a few buckets of salt water and add them back to the aquarium. This meant carrying several trips worth of heavy, dripping buckets through the house. What he has now is a gravity fed system into the orange bucket with a bilge pump to evacuate the old water from that bucket into the kitchen sink. The bilge can then be used to circulate water through the aquarium and the bucket, while filling with a hose from the kitchen sink and mixing in salt and chemicals. Less trips, no drips, but you’ve got to know what you’re doing with all of those valves.

We love seeing aquarium hacks like [Bill’s], or cooling the tank lights while heating the water, or just a fancy lighting setup in general. So if you’ve got some of your own, don’t forget to send in a tip about them.

Several people have been asking a similar question to,

“How do you at Hackaday keep track of and organize all your equipment?”
-[Jeff Allen] and others.

We have a variety of resources to help you keep track of your tools, equipment, parts, and supplies! Follow us after the jump for some tips for keeping your workspace clean and tidy. END_OF_DOCUMENT_TOKEN_TO_BE_REPLACED