When you’re looking to add some wireless functionality to a project, there are no shortage of options. You really don’t need to know much of the technical details to make use of the more well-documented modules, especially if you just need to get something working quickly. On the other hand, maybe you’ve gotten to the point where you want to know how these things actually work, or maybe you’re curious about that cheap RF module on AliExpress. Especially in the frequency bands below 1 GHz, you might find yourself interfacing with a module at really low level, where you might be tuning modulation parameters. The following overview should give you enough of an understanding about the basics of RF modulation to select the appropriate hardware for your next project.

Three of the most common digital modulation schemes you’ll see in specifications are Frequency Shift Keying (FSK), Amplitude Shift Keying (ASK), and LoRa (Long Range). To wrap my mechanically inclined brain around some concepts, I found that thinking of RF modulation in terms of pitches produced by a musical instrument made it more intuitive.

And lots of pretty graphs don’t hurt either. Signals from two different RF dev boards were captured and turned into waterfall and FFT plots using a $20 RTL-SDR dongle. Although not needed for wireless experimentation, the RTL-SDR is an extremely handy debugging tool, even to just check if a module is actually transmitting. END_OF_DOCUMENT_TOKEN_TO_BE_REPLACED 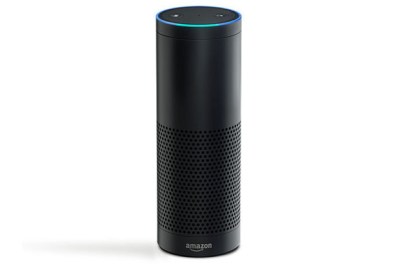 [ZPriddy] chose to implement a simple web server using Flask. The web server listens for the Amazon requests and responds appropriately. It also Oauth2 authentication to ensure some level of security. The server is capable of synchronizing the temperature of multiple Nest devices in the same home, but it can also increment or increment the temperature across the board. This is accomplished with some simple voice commands such as “Tell Nest that I’m a little bit chilly”. If you like Amazon Echo hacks, be sure to check out this other one for controlling WeMo devices. END_OF_DOCUMENT_TOKEN_TO_BE_REPLACED

One day, [Samy]’s best friend [Matt] mentioned he had a wireless doorbell. Astonishing. Even more amazing is the fact that anyone can buy a software defined radio for $20, a small radio module from eBay for $4, and a GSM breakout board for $40. Connect these pieces together, and you have a device that can ring [Matt]’s doorbell from anywhere on the planet. Yes, it’s the ultimate over-engineered ding dong ditch, and a great example of how far you can take practical jokes if you know which end of a soldering iron to pick up.

Simply knowing [Matt] has a wireless doorbell is not enough; [Samy] needed to know the frequency, the modulation scheme, and what the doorbell was sending. Some of this information can be found by looking up the FCC ID, but [Samy] found a better way. When [Matt] was out of his house, [Samy] simply rang the doorbell a bunch of times while looking at the waterfall plot with an RTL-SDR TV tuner. There are a few common frequencies tiny, cheap remote controls will commonly use – 315 MHz, 433 MHz, and 900 MHz. Eventually, [Samy] found the frequency the doorbell was transmitting at – 433.8 MHz.

After capturing the radio signal from the doorbell, [Samy] looked at the audio waveform in Audacity. It looked like this doorbell used On-Off Keying, or just turning the radio on for a binary ‘1’ and off for a binary ‘0’. In Audacity, everything the doorbell transmits becomes crystal clear, and with a $4 434 MHz transmitter from SparkFun, [Samy] can replicate the output of the doorbell.

For the rest of the build, [Samy] is using a mini GSM cellular breakout board from Adafruit. This module listens for any text message containing the word ‘doorbell’ and sends a signal to an Arduino. The Arduino then sends out the doorbell code with the transmitter. It’s evil, and extraordinarily over-engineered.

Right now, the ding dong ditch project is set up somewhere across the street from [Matt]’s house. The device reportedly works great, and hopefully hasn’t been abused too much. Video below.

END_OF_DOCUMENT_TOKEN_TO_BE_REPLACED 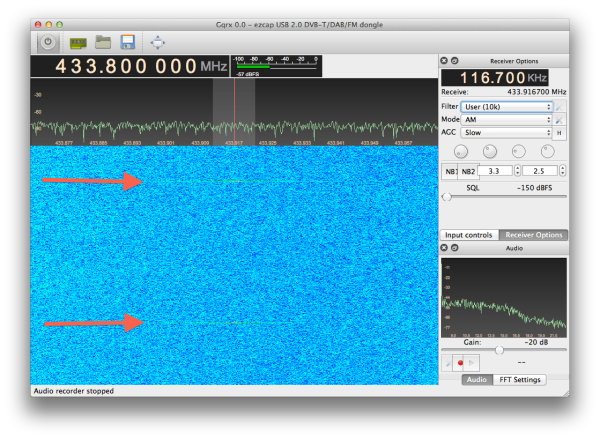 For about a week [Justin] had a wireless acidity level sensor in his esophagus and a pager-looking RF receiver in his pocket. So he naturally decided to use an RTL-SDR dongle to sniff the signals coming out of him. As most of our Hackaday readers know, these cheap RTL2382U-based DVB-T receivers are very handy when it comes to listening to anything between 50MHz and 1800MHz. [Justin] actually did a great job at listing all the things these receivers can be used for (aircraft traffic monitoring, weather images download, electric meter reading, pacemaker monitoring…).

After some Googling he managed to find his Bravo pH sensor user’s guide and therefore discovered its main frequency and modulation scheme (433.92MHz / ASK). [Justin] then used gqrx and Audacity to manually decode the packets before writing a browser-based tool which uses an audio file. Finally, a few additional hours of thinking allowed him to extract his dear esophagus’ pH value. Several people have been asking a similar question to,

“How do you at Hackaday keep track of and organize all your equipment?”
-[Jeff Allen] and others.

We have a variety of resources to help you keep track of your tools, equipment, parts, and supplies! Follow us after the jump for some tips for keeping your workspace clean and tidy. END_OF_DOCUMENT_TOKEN_TO_BE_REPLACED