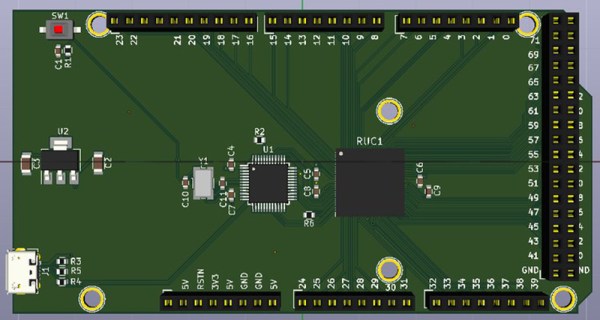 A few months ago, we caught wind of an interesting project in Big-O Open silicon. It’s a chip, loaded up with the great CPU cores of yore. Now, it’s finally a project on Crowd Supply. The Retro-uC project is an Open Source microcontroller for the retro geek, with a Zilog Z80, MOS 6502, and Motorola 68000 buried in the epoxy of a single QFP package. Oh yes, custom silicon and retro goodness, what more could you want?

The Retro-uC project is part of the Chips4Makers project to develop an Open Source chip for the community. Of course, this has been done before with projects like the HiFive1 and other RISC-V implementations, but really — this is a Z80, 6502 and 68k on a single chip. Let’s not bury the lede here.

As far as the architecture and implementation of these cores go, the ‘active’ core is externally selected on reset, or can be changed through the JTAG interface. There are 72 GPIO pins that can handle 5V, with each pin mapped to the address space of the cores. So far, so good. We can make this work for some really cool stuff.

The JTAG interface is used for testing and programming, although programs can be stored on an external I2C Flash chip and booted from there. There is 4kB of on-chip RAM, and while the peripheral configuration is still being determined, there will at least be UART, I2C, and PWM peripherals. How many of each is anyone’s guess.

The Retro-uC is now a Crowd Supply project, with rewards/orders/whatever ranging from a bare Retro-uC chip for $42 USD to an Arduino Mega-ish development platform for $89, a breadboard version of the chip for $59, and a chip mounted to a Perf2+ prototyping board for $65.

While this chip hasn’t even gotten to tape-out, all the cores work on an FPGA, and there is precedent for doing Open Source, crowdfunded silicon. We’re looking at this one closely and are excited to see what everyone is going to make.

This project has been a long time in the making, with the project lead giving a talk at FOSDEM earlier this year. Now it’s finally time for the hard part of any silicon project — getting the money — and we’re looking forward to see what comes of it.

When you’re debugging two bits of electronics talking SPI to each other, there’s a lot that can go sideways. Starting from the ground up, the signals can be wrong: data not synced with clocks right, or phase inverted. On top of that, the actual data sent needs to make sense to the receiving device. Are you sending the right commands?

When nothing’s working, you’re fighting simultaneously on these two fronts and you might need different tools to debug each. An oscilloscope works great at the physical layer, while something like a Bus Pirate or fancier logic analyzer works better at the data layer because it can do parsing for you. [James Bowman]’s SPIDriver looks to us like a Bus Pirate with a screen — giving you a fighting chance on both fronts. 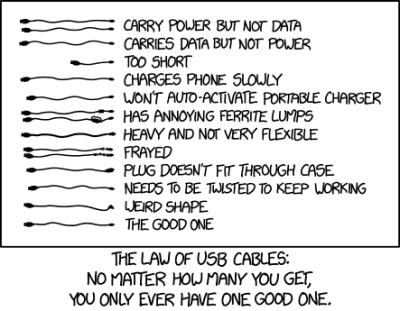 SPIDriver also has a couple more tricks up its sleeve: a voltage and current monitor for the device under test, so you don’t even have to break out your multimeter when you’re experiencing random resets. We asked [James] if these additions had a sad history behind them. He included this XKCD.

Everything about SPIDriver is open, so you can check out the hardware design, browse the code, and modify any and all of it to your taste. And speaking of open, [James] is also the man behind the Gameduino and an amazing FPGA Forth soft-CPU.

It’s fully crowd-funded, but it closes in a couple of days so if you want one, get on it soon.

And if you want to learn more about SPI debugging, we’ve written up a crash-course. With the gear and the know-how, you at least stand a fighting chance.

We get a lot of Kickstarter pitches in our email, but this one is different. First of all, it’s over. No biggie there. Secondly, it’s a laser-cut hurdy gurdy. What’s a hurdy gurdy? It’s a musical instrument that uses a wheel to vibrate strings. It has drone strings and a rudimentary keyboard for the melody. Think of it as ‘string bagpipes’ and you’re not that far off. This means you can laser cut (or 3D print, someone get on it) a hurdy gurdy, and that’s just awesome.

[Spencer] found a few very small seven-segment flip display units. This, of course, meant he had to build a clock. Right now [Spencer] is in the PCB design stage of the project, with the hope of finishing it before school starts. There is still an open question here: where do you get really tiny flip segment displays?

Perhaps we’ve said too much about the number one badge at this year’s DEF CON, but this is really the project that just keeps giving. [Hyr0n] thought it would be a great idea to have a shirt printed with the design of this year’s official Hackaday DEF CON badge. This seemed simple enough — all he needed to do was send the design off to a custom printed t-shirt place on the Internet and wait a week or two. This is where things got a little nuts. [Hyr0n] stole my intellectual property. My very intellectual property. Here’s a great tip for when a t-shirt place puts your order on hold because of a copyright: just say it’s creative commons, they’ll send it right on through.

The DIY-VT100 is a miniature VT100 (and VT102) terminal, because sometimes you need a standalone serial terminal. Soon, it’s going to be a Crowd Supply campaign. Who’s going to be the first to 3D print a look-alike VT100 enclosure for this little thing? Where can you get pre-bromiated filament?

Here’s a weird thing [Yann] sent in. The Rise mP6 was a non-Intel, non-AMD, non-Cyrix, non-VIA, x86 compatible CPU sold in the late 90s.  What’s cool about it? Three parallel MMX instructions, and an easter egg hidden in the microcode. The principal engineer on the project, [Chris Norrie], decided he wanted to hide his name in the CPU, and managed to do it without anyone else catching on. If you put ‘NZ’ into eAX and execute CPUID, it returns “* Chris Norrie *”. That’s a hack, and it’s amazing.

Crowdfunding is a mixed bag, at best. On one hand, you have fantastically successful products like Pebble, Oculus, and the Kano personal computer that managed to take in money, turn out a product, and become a successful company. (If even just for a while, the Pebble was great.) On the other hand, you have obvious scams like a color-picking pen that are run by a literal Nigerian scammer. 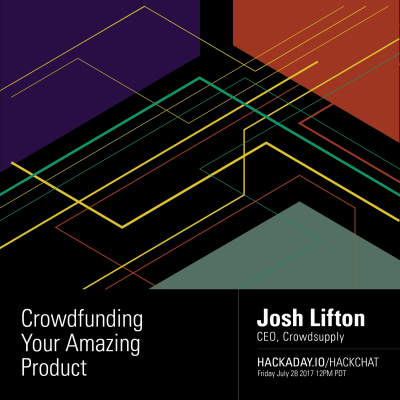 For this week’s Hack Chat, we’ll be talking with [Josh Lifton], CEO of Crowd Supply. Topics will include determining if there’s a market for your product, the ins and outs of fulfillment, to shipping your product. We’re taking questions from the community, and there’s a question sheet we’ll be reading from.

Josh has a PhD from the MIT Media Lab and holds a BA in physics and mathematics from Swarthmore College. Prior to Crowd Supply, Josh worked in a variety of technology settings, from instrumenting thousands of audience members with custom wearable computers for a Cirque du Soleil performance to, most recently, serving as head of engineering at Puppet Labs.

Our Hack Chats are live community events on the Hackaday.io Hack Chat group messaging. This Hack Chat will take place at noon Pacific time on Friday, July 28th. Confused about where and when ‘noon’ is? Here’s a time and date converter!

Now, this is finally changing. OnChip, a startup from a group of doctoral students at the Universidad Industrial de Santander in Colombia, have been working on mRISC-V, an open 32-bit microcontroller based on the RISC-V instruction set. It’s now a crowdfunding campaign, and yes, you can simply buy an open source chip.

We’ve taken a look at onchip’s Open microcontroller project before. The team has made significant progress of moving from something that can run on an FPGA to the tapeout of a real, physical chip. The onchip twitter timeline is a flurry of activity, with real silicon and a prediction that 50% of low-end microcontrollers will be running RISC-V in a decade.

If you want to get your hands on one of these open microcontrollers, the Crowd Supply campaign is actually fairly reasonable, considering this is custom silicon. $49 USD gets you a first-run mRISC-V in a QFN-32 package. $99 gets you the mRISC-V dev board with an SD card slot, USB, regulators, and of course the micro itself.

This chip’s capabilities are almost on par with a low-power ARM Cortex M0. The chip itself runs at 160MHz, has SPI, I2C, SDIO, and JTAG, as well as a 10-bit 10MS/s ADC and a 12-bit DAC. There are 16 GPIO pins on mRISC-V. You won’t be able to build a smartphone or laptop with this chip, but you will be able to build an Internet of Things gizmo.

While OnChip’s efforts won’t result in a completely open source smartphone, there are other projects in the works that will bring an Open Source core to more powerful devices. lowRISC is a project to bring a Linux-capable System on Chip to production, and various people smarter than us have brought GCC, LLVM, and QEMU to the architecture.

Most of the efforts to bring the RISC-V architecture, and indeed most Open Source processors, have focused on the big chips — full CPUs and SoCs. Onchip’s mRISC-V goes the other direction to create a small, open microcontroller. If you’re looking to create an ecosystem of Open processors, this makes a lot of sense; there are more Honda Civics on the road than Lamborghinis, and Microchip and TI ship far more microcontrollers every year than Intel ships CPUs.