We first spotted the Stribe music controller at Maker Faire. [Josh Boughey] has since refined the controller’s design so that it can be constructed in a modular fashion and it’s being sold in kit form by Curious Inventor. The kit has two columns of 64 LEDs and a Spectra Symbol SoftPot for control. You can daisy chain eight modules together using a ribbon cable. It uses SPI control, with a separate wire for the data line (not in the ribbon). An Arduino is used to hook the controller to programs like Max/MSP.

Google has been trickling out info about what they’re actually fixing in the G1 firmware updates. Before RC29, users were able to bypass the phone lock using safe mode. RC29 also brought WebKit up to date, presumably patching the bug [Charlie Miller] found. RC30 takes care of root console problem. Unfortunately there are very few details as to what or how particular items were broken. This release method leaves much to be desired; having the official Android Security Announcements group be the absolute last place to get security news is asinine. 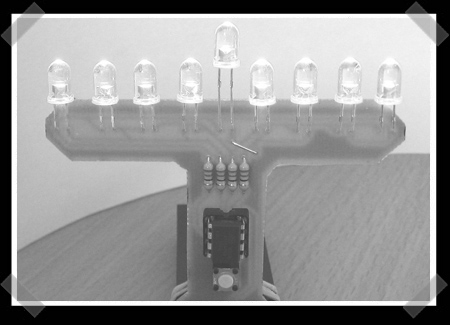 Reader [Mike] was not too impressed by design in a recent post we did on an LED menorahs. Doing what any self respecting hacker would do, he designed and built a better one then sent it in to us. He just happened to have an AVR ATtiny13 sitting around, so he used that for the brains. It has single button operation, is powered by 2 AA batteries, and even simulates the candles burning out. His custom PCB turned out quite nicely as well, the power plug connects to the batteries in a way that uses them as a base. Check out his site for detailed plans and source code. Great job [Mike].

[Stillboy] alerted us to a flying car that runs on biofuel. Flying cars have been the mainstays of science fiction and technological wish lists for years, but they elude production, as expenses, fuel, and gravity get in the way. [Gilo Cardozo], a paramotor manufacturer, managed to overcome those hurdles by thinking simply. He attached a paramotor to his car, which is powered by a Yamaha superbike engine and a gearbox from a snowmobile. His modified Rage Motorsport buggy is street legal in the United Kingdom, and in the air, can get up to 80 miles per hour. It will be fully tested in January, when he and his chief pilot and expedition organizer [Neil Laughton] drive and fly the car to Timbuktu.

Other flying cars are also in the works. DARPA recently announced their Personal Air Vehicle Technology project that will hopefully lead to a military-suitable flying car that can get up to 60 miles per hour on the ground and 150 miles per hour in the air. Moller International claims that a flying Ferrari is in the works, and could be available for purchase within two years. Are jet packs next?

[Kottke] posted advice for watching and sharing high quality YouTube videos. While it’s not HD quality, it’s much, much better than the normal, fuzzy quality you get on most videos. This hack has been available for some time, but it hasn’t been documented very well until now. When you’re logged in, you can just set the default to “Always play higher-quality video when it’s available”. When you’re linking to a video, add &fmt=18 to the YouTube URL. This also works when you’re embedding the link in WordPress. If you’re not in WordPress, then tack &ap=%2526fmt%3D18 onto each URL in the embeddable code. It’s pretty simple, and makes wasting your day at work much more enjoyable.

Take a tour of the Mutex laboratories, where mutants are made and nothing could possibly ever go wrong. [Steve] directed us to these videos of the Halloween set up he did with his son this year. Neighbor kids got to go on an action packed tour where mutants break free from their cages and have to be neutralized with special ray guns. Wow, why didn’t this guy live near us when we were kids? Check out a behind the scenes walk through with some good technical stuff after the break.