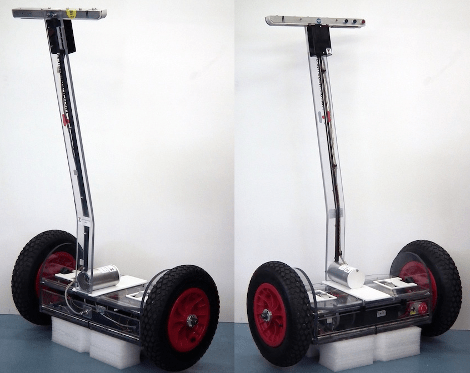 [Nick Thatcher] has built several iterations of a homebrew Segway, and the latest version is very impressive. When developing the project he figured there was just no way the thing would ever work, which led to its name, the No-way.

After the break you can catch a video of [Nick’s] test-ride. Looks like the two-wheeler is ready for daily use. You can just make out a red kill-switch on the right side of the polycarbonate body. This lets you disconnect the power if things get out of hand, or just when you’re done riding it. But there is also a dead-man’s switch which we believe uses two sensors where your feet go on the enclosure’s top surface. The handle has some indicator lights built into it, as well as buttons under each thumb which are used for steering. Control circuitry includes an Arduino UNO which reads a gyroscope/accelerometer sensor board from SparkFun. Two 7.2 Ah batteries provide 24V for the pair of electric scooter motors that turn the wheel-barrow wheels.

We love looking at these Segway clone project. So if you’re working on one of your own don’t forget to document your progress!

END_OF_DOCUMENT_TOKEN_TO_BE_REPLACED

If you were to try to take a picture of a UFO, how would you do it? Sit by the side of a road in Nevada near Area 51? Pie tin on a string? A French team of UFO enthusiasts put together an automated UFO detection device (Google translate) out of a disco light and CCTV camera so long nights of watching the skies can be automated.

The build uses a disco light with an altitude and azimuth mount to constantly scan the skies on the lookout for strange, unexplained lights. Attached to this swiveling mount is a camcorder and a CCTV camera that streams video to the command and control laptops for image analysis.

In addition to object tracking, there’s also a diffraction grating in front of the CCTV camera. The team behind this project previously used this for some very low tech spectroscopy (translation) to identify emission lines in a light source. Light that have a signature including Oxygen and Nitrogen will probably be ionized air, while less common elements may be the signature of “advanced propulsion.”

While this build is going to detect a lot of satellites and meteors, there’s a definite possibility of capturing an unexplained phenomenon on video. This must be an example of when worlds collide. Who would have thought the geekery of Mindflex and Arduino could make its way into high fashion? But sure enough, this dress transforms based on the mental concentration of the model (must resist urge to crack joke here).

Details are a bit sparse, but you can get a look at the prototype in the video after the break. There’s no nudity; a larger skirt covers a more plain version. That over-skirt is connected to some type of motor system which is driven by an Arduino. When the EEG sensor in the hat detects a certain level of brain wave activity, the outer skirt is lifted and pulled to the back of the outfit, exposing the tighter version beneath.

[Lorenzo] wrote in to share the link to this garment hack. He mentions that a Lilypad and Mindflex are at work here. Looking more into the artist’s website we find this isn’t the only tech-wear produced. There’s a maternity outfit which can sense the baby’s beating heart, and harvest other data about both mother and baby, as well as a few others.

We can’t think this has much future as an everyday outfit, but more utilitarian versions are out there so we think the sky’s the limit on wearable tech.

END_OF_DOCUMENT_TOKEN_TO_BE_REPLACED

[Josh] whipped up a shamrock themed hat by adding an outline of green LEDs to this bowler. Just remember, don’t drink and solder. Happy St. Patrick’s Day everyone!

[Karl] took a string of mostly useless battery-powered Christmas lights and found a good use for them. He replaced the stock board with a boost convert and uses the two AA batteries as a 5V power supply when mains power isn’t handy.

The broken plastic piece seen here keeps a dishwasher closed while running. The part couldn’t be sourced by a repairman but the best solution turned out to be printing a perfect replacement part.

[Darrell] picked up a surplus test-tube rack to use as resistor storage. It’s a great system, but his Ruby script that uses LaTeX to generate color-coded labels is a really nice touch as well.

No, it’s not a dupe. [Alp_X] found the link to a build log for the DeLorean quadcopter that headlined our last Links post. It’s in Russian but the machine translation should help a bit. END_OF_DOCUMENT_TOKEN_TO_BE_REPLACED

While Hack a Day’s modus operandi is serving up hacks from around the Internet, sometimes we feel the need to exercise a bit of editorial freedom. A thousand words is a bit awkward for the front page, so feel free to skip the break and head straight to the full text of this article.

It’s no secret myself and my fellow writers for Hack a Day are impressed with the concept of a personal 3D printer. We’ve seen many, many, builds over the years where a 3D printer is a vital tool or the build itself.

Personally, I love the idea of having a 3D printer. I’ve built a Prusa Mendel over the past few months – Sanguinololu electronics, [Josef Prusa]’s PCB heated bed, and a very nice Budaschnozzle 1.0 from the awesome people at LulzBot. I’ve even made some really cool bits of plastic with it, including the GEB cube from the inside cover of Gödel, Escher, Bach (a very tricky object to realize in a physical form, but not a bad attempt for the third thing I’ve ever printed, including calibration cubes). Right now I’m working on the wheel design for a rocker-bogie suspension system I hope to finish by early August when the next Mars rover lands. My Prusa is a wonderful tool; it’s not a garage filled with a mill, lathe, and woodworking tools, but it’s a start. I think of it as the Shopsmith of the 21st century.

Lately I’ve become more aware of the problems the RepRap and 3D printer community will have to deal with in the very near future, and the possible solution that led me to write this little rant.

END_OF_DOCUMENT_TOKEN_TO_BE_REPLACED

[Andrew] has been pining for an Optimus Maximus – a keyboard with a small LCD screen in each key – for years. Like a lot of people, he love the idea of a completely configurable keyboard, but balked at the two thousand dollar price tag. Although it doesn’t have full color OLED screens behind each key, [Andrew]’s nook simple touch can be used as a keyboard just the same.

After rooting his new nook, [Andrew] had a very nice tablet computer, and the only Android device with an e-ink screen. Although[Andrew] never wrote an Android app before, he wanted to do a proof of concept build to see if a nook keyboard would actually work. The “keyboard app” is actually just a webpage hosted on his home server. When he presses a virtual key, JavaScript sends an ASCII value back to the server where it is decoded and sent to xte.

[Andrew] says his build works, but not very well. Opera mini doesn’t like the homebrew server he set up, and Cyrillic characters are a no go. Still, it works, and looks like an awesome application for an e-ink tablet with a proper Android app. Demo after the break.