That grey box at the top of the photo is a modular power supply unit for a rack-mounted server system. [Sebastian] decided to repurpose it as a charging source for his RC batteries. He chose this HP DPS-600PB because of its power rating, efficiency, and you can get them at a reasonable price.

This is an active power factor corrected (APFC) PSU, which he says draws 40% less current than the non-APFC variety. Since he sometimes charges batteries in the field from a generator this is a big plus. But a bit of modification is necessary before it can be used as a source.

Since this is a rack device it has a set of connectors on the back. For power there are spade connectors which mate with a fin on the rack. He soldered positive and negative leads between the spades to interface with the battery chargers. The PSU won’t fire up if it’s not in the rack, so some jumper wires also need to be added connecting three of the interface pins.

With his modding all worked out he went on to use two PSUs for a 24V source, housing them to a nice carrying case while at it. One high-speed photography controller to rule them all. If you’re looking to photograph droplets of water splashing on a still reservoir this is the ticket. But if you’re not, it still offers an incredible amount of flexibility for other high-speed needs. Inside you’ll find an Arduino Mega, which has plenty of room to bend to your will.

[Michael Ross] is the man behind this box. He wanted a system that did it all; timings, droplet control, camera shutter, etc. What you can’t see in the image above is the interface panel on the back of this enclosure (this shot shows the top of the box). The video after the break will give you a look at the overall setup. It has ports to control two different light sources, detectors to snap the images using an infrared sensor or via sound (we’re thinking bullet photography), and four ports to control solenoid valves.

He produced a mammoth PDF tutorial which will guide even the biggest noob through the entire build process. Find it at his site linked above.

END_OF_DOCUMENT_TOKEN_TO_BE_REPLACED Here [Catarina Mota] is showing off a ring of magnetic ink printed on a piece of paper. It’s strong enough to hold a disc magnet in place when the paper is raised vertically. This strength comes from mixing your own batch of ink.

Magnetic ink has been around a long time and is most often used in banking. The account number and routing number on the bottom left of paper checks are printed in magnetic ink to allow for automated recognition. Iron oxide is charged by the reader as it passes through. In this case, magnetite is used as the doping agent as it has very strong ferromagnetic properties. By mixing it with acrylic medium in a vortex mixer you end up with a homogeneous ink.

There’s a quick demo after the break that shows how well this printed ring holds the magnet. What are some things for which you would use this ink? Leave a comment to let us know.

END_OF_DOCUMENT_TOKEN_TO_BE_REPLACED [Marcell] has always been turned off by the price tag of commercially available double flash adapters. He decided to see what kind of performance he could get out of a flash adapter which he built himself.

The raw materials used should seem quite familiar. The optical fibers act as a conduit to redirect the light from the flash, but he needed a way to hold them in place. He chose to use locline. It’s a product we often see in CNC mill builds to blow debris away from the cutter head. It’s hollow, and holds its position. This is perfect because it allows for easy adjustment and provides a channel through which the fibers can be routed. The Y adapters used here run to a hard board base which connects to the mounting lug on the bottom of the camera. [Marcell] suggests using a T-piece if available because the Y fitting made it a bit more difficult to push the fibers through. 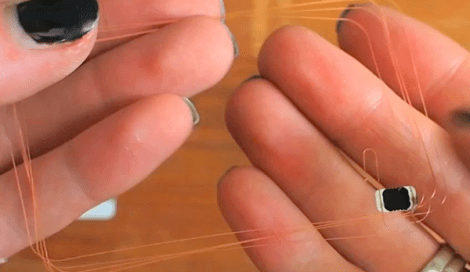 Check it out, this is a Boston transit pass — or at least the parts of it that matters. [Becky Stern] got rid of the rest in a bid to embed the RFID tag inside her cellphone.

The transit pass, called a CharlieCard, started out as a normal credit card shaped tag which you might use for access in the workplace. She unsheathed the chip and its antennae by giving it a generous soak in acetone. In about thirty minutes the plastic card looks more like paper pulp, and you can gently fish out the electronics. These are now small enough to fit in the back cover of a cellphone much like those inductive charging hacks.

[Becky] put hers in an iPhone. But the idea comes from [Dhani Sutanto] who used the same technique to extract the coil from a London transit pass. He then embedded the hardware in a resin cast ring.

END_OF_DOCUMENT_TOKEN_TO_BE_REPLACED END_OF_DOCUMENT_TOKEN_TO_BE_REPLACED

Need a tiny web server? [Rob] over on the 43oh forums made an Ethernet booster pack for the very popular TI MSP430 microcontroller. If that’s not enough, [Rob] also put together an all-in-one solution with a MSP430 and Ethernet controller that can be powered by a battery. Along with the web server that fits in just 5k of flash, we’re going to say [Rob] has a very good solution for remote sensing and data logging.

For his Ethernet-enabled 430, [Rob] chose to use the WIZnet W5200 Ethernet controller. This chip communicates with the 430 via and SPI interface and has a hardware TCP/IP stack that supports TCP, UDP, and PPPoE, offloading all the low-level stuff off of the 430 and onto the Ethernet controller.

After the break there are a pair of videos of [Rob] showing off his tiny web server. A few neat features include a full memory dump of the 430, as well as a reading the states of all the pins via an HTML page. If you’re looking for a way to collect data over Ethernet, we don’t think you could do better than [Rob]’s tiny 430-based web server. Also, if you’d like to control a few devices over the Internet, [Rob] included a few optoisolators  for lights or appliances.

The code is available on the 43oh forum page, but [Rob] says he’ll clean that up and put it in a Git.