At first we thought that [Brandon Dunson] was writing in to tell us he’s too lazy to fix his bathroom fan. What he really meant is that simply replacing the unit isn’t nearly enough fun. Instead, he developed his own bathroom fan trigger based on stinky or humid air conditions. He didn’t publish a post about the project but we’ve got his entire gallery of build images after the break.

The initial inspiration for the project came from a twitter-connected fart sensing office chair. Hiding behind the character display you can see the MQ-4 methane gas sensor which he picked up for the project. But since there’s also a shower in the bathroom he included a humidity sensor with the project. Both are monitored by an ATmega328 which averages 10 readings from each sensor before comparing the data with a set threshold. If the sensors read above this level a relay turns on the bathroom fan.

Don’t be confused by the small DC fans seen above; [Brandon] is still using a proper exhaust fan. These are just used to help circulate the air around the sensors so that low-hanging smells will still trigger the system. This has got to be the perfect thing for a heavily used restroom.

END_OF_DOCUMENT_TOKEN_TO_BE_REPLACED 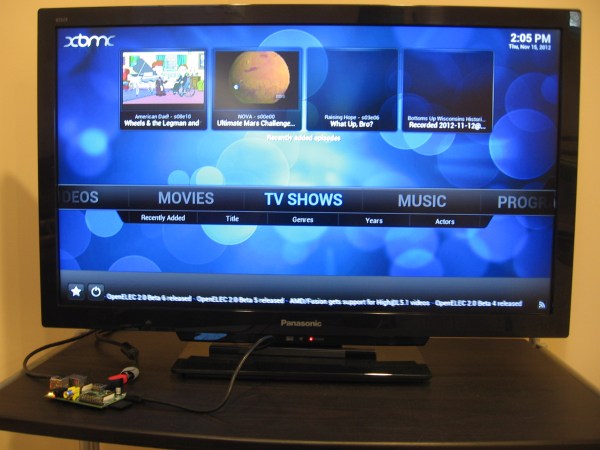 For years I’ve been dreaming of a streaming media device that could just be stuck to the back of a television. Since XBMC has been far and away my favorite set-top box software, I’ve closely monitored hardware developments that can run that package. Now I think it’s time to declare that the Raspberry Pi has achieved the base specifications to be branded the XBMC device that rules them all.

There are a huge range of opinions on this topic, but please hear me out after the break to see what has brought me to this conclusion.

END_OF_DOCUMENT_TOKEN_TO_BE_REPLACED END_OF_DOCUMENT_TOKEN_TO_BE_REPLACED

With the release of the Wii U last weekend we knew it wouldn’t be long before we saw those glorious gut shots on the Internet. The folks at iFixit have torn down a Wii U, and the insides look somewhat promising for a potential hack to take control of the Wii U Game Pad.

The components in the Wii U console aren’t terribly surprising; a few wireless controllers, HDMI adapters, Flash memory chips, and the IBM Power CPU make up most of the interesting components. The insides of the GamePad, though, look pretty interesting. It appears the Wii U GamePad is powered by an ARM Cortex microcontroller built by STMicroelectronics, but the part numbers for the major ICs on the GamePad board are impervious to Googling.

Of course there’s still the question of how video is transmitted wirelessly from the Wii U console to the GamePad. iFixit found a Broadcom BCM4319XKUBG Wireless module that operates on normal WiFi frequencies. This module has been used in a few other pieces of video gear, most notably the Boxee Box, so there is some possibility of intercepting the video signal transmitted to the GamePad and figuring out the protocol.

The long and short of iFixit’s teardown, at least from the hacker perspective, is that all the interesting parts use hardware similar to what you’d find on any other eminently hackable device. Here’s to hoping we get an open Wii U GamePad before the year is out.

What do you do when you have a microcontroller you’re trying to optimize? One method is using a debugger, but for AVRs and such that’s not a very common technique. For lower-level electronics projects, it’s nearly impossible, even. [Cnlohr] built a small Minecraft server that listens to in-game redstone circuits, but the performance of his real-world to block-world bridge wasn’t what he hoped. He came up with a pretty clever way of figuring out what was slowing his server down without any special gear at all.

[cnlohr]’s Minecraft server is just a simple AVR microcontroller, Ethernet adapter, and SD card affixed to a beautiful glass PCB. The performance of his server wasn’t what he expected; downloading a largish file from the server resulted in a download rate of about 55kbps, much slower than he expected. He wasn’t quite sure what the hangup was, so he took a camera and with a long exposure time took a very blurry picture.

The Minecraft server has a blue LED to show when the SD card was being accessed. In the picture above, [cnlohr] saw that SD card access was taking far too long, and if he wanted to optimize the code this would be the place to start.

Not bad for a dead-simple method of seeing where the code on your microcontroller project is slowing down.

END_OF_DOCUMENT_TOKEN_TO_BE_REPLACED The stable version of OpenOCD (an open source On-Chip Debugging software package) doesn’t have support for the ICDI protocol used by the Stellaris Launchpad board. But it is pretty easy to build your own OpenOCD from source after patching it to use the protocol.

We’ve already seen an open source tool used to flash binary images to the TI ARM board. But that can’t be used with GDB. With the recent inclusion of USB-based ICDI in the OpenOCD development branches we gain all the features that come with the package. We’re quite happy hear about this as we use OpenOCD for many hardware architectures and this makes development for this board feel more like normal.

Our Stellaris Launchpad hasn’t just been sitting in the closet since we got it. We’ve learned a lot by using the lm4tools to program the chip as we work our way through the online workshop. We’re really beginning to like the Stellarisware peripheral library that has been provided. For us it works in a much more intuitive way than the one that STM uses with their ARM Discovery boards. We’d recommend taking a look at the workbook PDF (which is basically a verbose listing of what’s in the video series) and the library reference (called SW-DRL-UG-9453.pdf) which is in the docs folder of the Stellarisware package.

With the launch of the Wii U yesterday, we were wondering exactly how long it would take for this new console to be broken wide open allowing for the execution of homebrew code. Technically, it only took a day, as [wraggster] shows us, but the results aren’t what you would expect. Right now, he’s using methods meant for the classic Wii to open his system up; probably not the best way to open up the Wii U, but a start nonetheless.

This hack revolves around the Super Smash Bros. Brawl exploit that allows for the execution of unsigned code. It’s called Smash Stack and is one of the more popular ways of getting homebrew code running on the old, last-gen Wii.

Of course [wraggster]’s hack is dependent on the fact the classic Wii has been open for homebrew development for years now, and only works because of the Wii U’s ability to play classic Wii games. This probably isn’t the direction Wii U hackers want to go into, but it does provide a way for anyone to get into the Wii U system without using any new tricks.