Here’s another Flora Arduino based project from [Becky Stern]. It’s a backpack with brake lights and turn signals for use when motorcycling, but it should work just as well for bicyclists. From this view the project looks pretty normal, but things get downright crazy when she decided to use the WS2801 pixels for the LEDs. Sure they take all the work out of driving an array of LEDs, and they offer full color and dimming levels. But when you see the bulk of cabling and PCBs this adds to the project (shown in the video after the break) we think you’ll agree that this was an interesting choice.

That issue aside the project is a lot of fun. The system doesn’t patch into the motorcycle’s electronics. Instead, it uses an accelerometer to detect when the brakes are applied and light the LEDs according. The turn signals are switched with an RF remote control that can be mounted on the handlebars.

Anyone looking to hack outerwear with electronics can learn form the fabrication techniques used here. [Becky] details how to make holes in the bag and sew parts to them, as well as using Sugru to waterproof vulnerable components.

END_OF_DOCUMENT_TOKEN_TO_BE_REPLACED [Michael] posted up-to-date GPS data sets in the GPX format.  These data sets are an alternative to paid updates. Since GPX is a published standard which uses an XML style formatting for location data [Michael’s] time was spent getting the original sets and finding a way to translate them for his Garmin EXTREX GPS.

The original data comes from — hang on, this is a mouthful — the US Federal Aviation Administration’s Facility Aeronautical Data Distribution System (FADDS). He had to apply for permission to download it and to use it in producing a custom GPS build. He grabbed the Airport waypoints and navaid sets, then studied accompanying files detailing the data structure before writing his own Visual Basic 2010 program to spit out the GPX files. He says he wanted to make them available in the spirit of the Open Hardware/Software movement. This may be most interesting for pilots (the kind that put Nooks on the dashboard, not the kind who watch the aircraft from the ground), but we’re sure there’s a myriad of uses for non-pilots alike. END_OF_DOCUMENT_TOKEN_TO_BE_REPLACED

The LVL1 Hackerspace held a hackathon back in June and this is one of the projects that was created in that 24-hour period. It’s a 3D scanner made from leftover parts. The image gives you an idea of the math used in the image processing. It shows the angular relations between the laser diode, the subject being scanned, and the webcam doing the scanning.

The webcam is of rather low quality and one way to quickly improve the output would be to replace it with a better one. But because the rules said they had to use only materials from the parts bin it worked out just fine. The other issue that came into play was the there were no LCD monitors available for use in the project. Because of that they decided to make the device controllable over the network. On the right you can see a power supply taped to the top of a car computer. It connects to the laser (pulled out of a barcode scanner which produces a line of red light) and the turntable. A Python script does all of the image processing, assembling each slice of the scan into both an animated GIF and an OBJ file.

Imagine a single chip able to interface with your Ethernet, USB, and serial devices, turn those connections into wireless radio signals with miles of range, able operate off a single AA battery, and costs less than $2. That’s the promise of the Weightless special interest group that wants to put several hopefully not vaporware radio chips in the hands of everyone on the planet.

Long-range wireless networks are a tricky thing; for home networks, Bluetooth and WiFi reign supreme. Venturing into the outdoors, or really any place more than a few hundred feet from a WiFi repeater is a challenge, though. If you’re trying to send data to a fleet of automobiles, track an endangered animal, or make a smart power grid, your only real option is a cell phone tower with very high costs in hardware and battery life.

Weightless hopes to change that with a small radio chip that includes a MAC, PHY, and all the components necessary to turn just about any digital connection into a wireless link between devices. The radio will operate in the spectrum left behind by UHF TV (470 – 790MHz), and the folks working on already have some reference designs etched into silicon.Don’t expect this to replace WiFi, cellular, or Bluetooth, though: according to the getting to know Weighless book, the designers are aiming for a data rate of only a few kB/s.

Still, it’s a great use of now unused spectrum, and would fill a huge gap in what is readily possible with homebrew Internet of Things things.

Tip ‘o the hat to [Mark] for sending this one in. 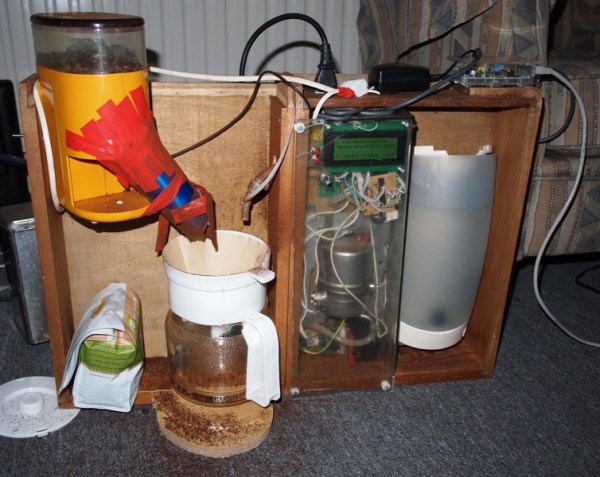 Senseo coffee makers are automated brewers that use coffee pods. [Ronald] had one, but wasn’t satisfied with the quality of the coffee it produced. His solution was to hack it apart and build his own automatic coffee machine with the innards.

The coffee brewing part of the system is controlled by an ATmega8. This reads the temperature using the NTC sensor from the original machine and actuates the various parts of the Senseo machine, and the added grinder. The timing was all done by trial and error, optimizing for the best cup of coffee.

Keeping with the trend of adding Raspberry Pis to everything, [Ronald] connected one to this build for remote control. He runs a very hacked version of LCD2USB which deals with communicating with the RPi. An Apache web server hosts a PHP script to provide a user interface, which runs a C program to tell the system to start brewing.

Unfortunately, [Ronald] didn’t give us a link to his web interface, so we can’t remotely brew him coffee. However he did provide all of the source for the project in his write up.