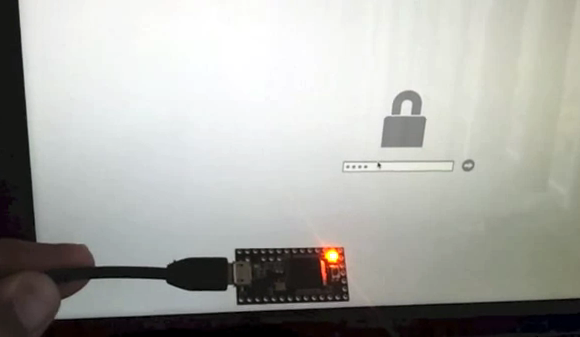 [Oliver] wiped the hard drive from a Macbook Pro using the ‘dd’ command on another machine. This does a great job of getting everything off the drive, but he was still faced with the EFI PIN lock protection when he tried to put it back into the Mac. You used to be able to clear the NVRAM to get around this issue, but that exploit has now been patched. So [Oliver] set out to use a microcontroller to brute-force the EFI PIN.

You can read his back story at the link above. He had the chance to enter a 4-digit pin before the format process. Now that he’s wiped the drive the code is at least 6 characters long, which is a lot more possibilities (at least it’s numeric characters only!). To automate the process he programmed this Teensy board to try every possible combination. It worked great on a text editor but sometimes the characters, or the enter command wouldn’t register. He guesses this was some type of protection against automated attackers. To get around the issue he added different delays between the key presses, and between entering each code. This fixed the issue, as you can see in the clip after the break. Unfortunately after two 48-hour runs that tried every code he still hasn’t gained access!

END_OF_DOCUMENT_TOKEN_TO_BE_REPLACED Your hands do a lot of work between the keyboard and the mouse, why the heck are you letting your feet be so lazy? [Dossier van D.] is putting an end to the podiatric sloth. He built this set of three foot pedals which have gone through two versions of functionality.

The buttons themselves are made from a base plate of plywood with a smaller piece on top for each ‘key’. The two parts are separated with some foam carpet pad, with a tactile push button in between to register a click. The only thing we’d change about this is adding a couple of wooden spacers next to the switch so that accidentally sanding on a button doesn’t break that electronic component.

Originally each button was soldered to a gaming controller. This worked just fine using button mapping, but recently [Dossier] made the switch to using an Arduino Leonardo. This is a perfect choice. Unlike input devices made with older Arduino versions the Leonardo board can natively register as a keyboard, making it a snap to programmatically map any key to the switches.

If you like this project you should check out [Dossier’s] foot mouse as well. [Navin] has been hard at work producing a GUI which works with different micocontrollers. The idea is to make it even easier to develop projects by simplifying the feedback and control you can get from the prototyping hardware. The best part about it is that he designed the software to interface with any hardware which can be programmed in C++.

The screenshot above shows the program communicating with an mbed board which has an ARM microcontroller. But the Arduino board (which uses an ATmega chip) is supported as well. Support for additional architectures can be added by writing your own configuration file for the chip. The Python program then asks for the com port it should be using for this session.

The source package, including the code which runs on the microcontrollers, can be found at the project repository. The functions used in the sketches are quite simple and should be a snap to drop into your own code projects. Apartment dwellers who are living the nomadic lifestyle take note. You don’t need to live your tinkering lifestyle out of a toolbox. Here is a great example of a respectable electronics bench which breaks down when it’s time to move (translated). We’re sure you already belong to your local hackerspace for the big projects, but this corner office will let you take some of your creations home for continued tweaking.

The bench uses slotted aluminum rails as the support structure. The slots accept small nuts, which have a spring-loaded ball bearing to keep them from sliding freely ([Nerick] mentions this is especially nice for working with the vertical runs). These fasteners ended up being the most costly component.  The desktop itself is the largest solid piece. It was machined using a CNC mill (we already mentioned having a hackerspace membership) so that the mounting screws are countersunk to leave a perfectly flat surface. It’s clean, has a small footprint, and gives you a place to dump all of your gear. What else could you ask for? Cadsoft’s Eagle is a great tool for the independent maker. It’s a relatively easy to use PCB layout program with a ton of part libraries available for just about any project. If you’re using a part this isn’t included in these libraries, though, creating them by hand is a pain. [Dave] sent in a project he’s been working on that makes parts for Eagle with a Perl script, allowing for easy creation of custom parts that aren’t included in any library.

One thing that’s really convenient for custom Eagle parts is that most components are DIPs or some sort of leaded SMD component. [Dave]’s script takes the dimensional data from any chip’s datasheet and creates a custom outline for each part. The inputs and outputs can also be ripped directly from the datasheet and assigned to the footprint, making for a relatively automated process that creates custom parts in Eagle. Now for someone to use this script with a little OCR to make a ‘create Eagle part from PDF’ app…