Laser cutter owners may find this online box design tool which [Jon] built quite useful. It’s got a few more joint options than the Inkscape box design add-on does.

Apparently the US Navy has the ability to bring down drones in a flaming pile of laser-caused death. [Thanks Joshua]

[Michail] has been working on a transistor-based full adder. He’s posted a Spice simulation if you want to learn about the design.

Turn your crystal clear LED bodies into diffuse ones using a wooden dowel, power drill, and sandpaper. The results look better than what we’ve accomplished by hand. [Thanks Vinnie]

Play your favorite Atari Jaguar games on an FPGA thanks to the work [Gregory Estrade] did to get it running on a Stratix-II board. You can pick up the VHDL and support tools in his repo. If you’re just curious you can watch his demo vid.

Members of Open Space Aarhus — a hackerspace in Risskov, Denmark — have been playing around with a bunch of old server fans. They made a skirtless hovercraft by taping them together and letting them rip. Too bad it can’t carry its own power supply

Here’s another final project from that bountiful Cornell embedded systems class. This team of students made a maze game that forms the maze by capturing walls drawn on a white board.

And finally, here’s a unique chess board you can build by raiding your parts bin. [Tetris Monkey] made the board from the LCD screen of a broken monitor. The playing pieces are salvaged electronics (like big capacitors) against corroded hardware (like nuts and bolts). We think it came out just great! 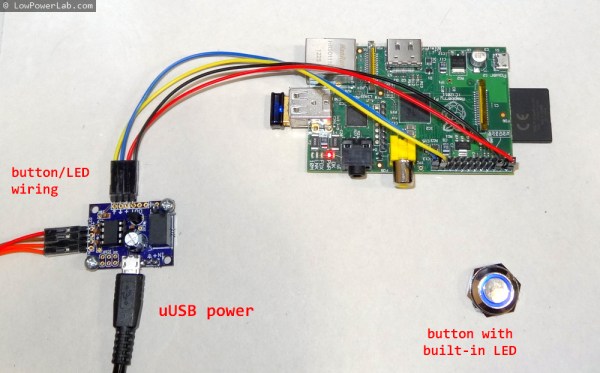 One aspect of the Raspberry Pi that has always challenged us is the power supply. It was a great idea to power the board from a standard micro-USB port because economy of scale makes phone chargers (even in the 1A range necessary for stable operation of the RPi) cheap and easy to acquire. The thing we miss is the ability to power the device on and off using the built-in hardware. The quandary has given rise to many different solutions, and the ATX Raspbi smart PSU is one of the better ones we’ve come across. It’s a nicely packaged take on the PIC-based version we saw earlier in the year.

The device is a small PCB that acts bridge between the micro-USB power supply and the RPi board. It offers several breakout headers, one of which is used for a power button. The button is monitored by a microcontroller that switches the on-board relay accordingly. But it won’t just kill the power when you want to shut down. It first signals one of the RPi GPIO pins, causing the OS to execute a shutdown script. It then monitors the RPi for the shutdown tasks to finish before cutting the power.

END_OF_DOCUMENT_TOKEN_TO_BE_REPLACED

Sending data from a microcontroller to a PC usually requires some sort of serial connection, either through fiddly on-chip USB, FTDI chips, or expensive radio ICs. [Scott] didn’t want to deal with this when creating a network of wireless temperature sensors, so he hacked up a few cheap 433 MHz radio transmitters and receivers to transmit data to a PC for about $3.

After sensor data is collected on a microcontroller and sent over radio, there’s still the issue of getting it into a PC. For this, [Scott] piped the data into the microphone port of a cheap USB sound card. We’ve seen this trick before both in the world of microcontrollers and loading programs onto a Commodore 64 via a cassette interface.

Once the data is sent into the sound card, it’s decoded with a a small Python app. Given the range and quality of the RF transmitters and receivers  [Scott] says it’s not an extremely reliable way to send data to a PC. It is cheap, though, and if you need to read sensors wirelessly on a budget, it’s hard to do much better.

Check out [Scott]’s demo of his creation below. For how awesome Google Voice is, we’re surprised we haven’t seen this before. [Steve] is using Google Voice to run commands on just about any Linux box.

Google Voice doesn’t have an official API, and existing unofficial APIs weren’t up to snuff for [Steve]’s project. He ended up writing his own that checks his unread message inbox every minute and looks for new text messages beginning with the phrase, ‘Cmd’. If a series of checks pass – the text coming from a known phone number and a proper terminal command – the command runs and sends the a text back indicating success or failure.

While [Steve] probably won’t be playing nethack or Zork via SMS anytime soon, we can see this being very useful for a Raspi home automation task. Just send a text message and a properly configured Linux box can open your garage door, turn on the lights, or even start a webcam.