[Adrian] came across a treasure trove of 507 mechanical device designs. It didn’t seem quite right for a Retrotechtacular post, but we wanted to share it as it’s a great place to come up with ideas for your next Rube Goldberg machine.

Biking with headphones is dangerous. That’s why [J.R.] built a handlebar enclosure for his Jambox Bluetooth speaker.

While dumpster diving [Mike] found a Macbook pro. It was missing a few things, like a keyboard, touchpad, battery, ram, and storage. He borrowed a power supply to test it out but without the keyboard there’s no power button. He figured out the traces on the motherboard which turn it on when shorted.

[Mateusz] want to let us know about the Hercules LaunchPad. Like the other TI Launchpad offerings it’s an all-in-one dev board. The Hercules line features a couple of flavors of dual-core ARM chips. Can you believe the dev boards you can get for under $20 these days?

After seeing the ammo can sound system about a month ago [Ilpo] was inspired to share his ammo can PC case with us.

And finally, here’s a way to display your Bitcoin mining rig for all to see. This system was laid out in an antique frame and hung on the wall.

If you look around a few electronic music forums, you’ll see a lot of confusion over the difference between a bitcrusher – a filter that reduces the bit depth of an audio signal – and a sample rate reducer – a filter that does exactly what its name implies. With the popularization of 8-bit and retro synth music, this difference is obviously of grave import of concern to saints and kings alike. [Michael] is more than happy to walk us through the difference with real-time sample and bit rate adjustment with his audio hacker board.

The audio hacker board is an Arduino shield with a 12-bit DAC and a 12-bit ADC. With two 1/8″ jacks and a pair of pots, [Michael] was easily able to whip up a sketch that is able to adjust the sample rate and bit depth of an audio signal in real-time.

Contrary to nearly everyone’s opinion of what ‘8-bit’ music is, it’s actually the sample rate that makes music sound like a cassette deck jury rigged into a Nintendo Entertainment System. Reducing the bitrate just makes any audio source sound louder and worse.

Check out the excellent demo video of the effect of bitcrushers and sample rate reducers below.

END_OF_DOCUMENT_TOKEN_TO_BE_REPLACED 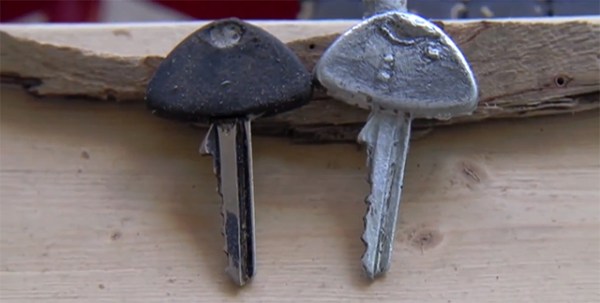 Making keys is an amazing art with a lot of skill and technique involved. For those of you living in a post-apocalyptic world, [Dan] has a much simpler solution to the problems of having one too few keys for your locks and deadbolts – just cast them out of scrap with the power of the sun.

To make the mold of the key, [Dan] is using a two-piece plaster of paris mold. First, a thick layer of plaster is laid down in a small container and the key floated on the surface. After drying, sprues are put in with clay and the key embedded in a curing plaster block. After a few hours, a proper mold is created ready to receive molten metal.

The casting material is zinc – not as hard as the original steel key, but more than strong enough to turn a lock. This zinc is melted in a steel and plaster crucible with a gigantic fresnel lens.

As for the utility of this method of copying keys after the apocalypse, we’ll have to wonder how practical this method is. A giant fresnel lens isn’t just something you randomly find unless you’re going house to house looking for projection TVs, and finding a can of mold release after the end of the world is beyond credulity. That said, it’s a cool demonstration of metal casting that can be easily accomplished at home or at any hackerspace.

END_OF_DOCUMENT_TOKEN_TO_BE_REPLACED

A friend of [Michael]’s said his company was getting rid of some old lab equipment and asked him if he wanted a very large and very old digital storage oscilloscope. A ‘hell yes’ and we’re sure a few beers later, [Michael] found an old Gould 200 MHz four-channel scope on his bench. Even 20 years after its production it’s still a capable tool, but the serial ports on the back got [Michael] wondering – would it be possible to plot the screen of the scope on his computer?

The scope has three ports on the back – GPIB, miscellaneous I/O, and RS423. The latter of those ports is similar enough to RS232 that a USB to Serial converter just might work, and with the help of a null modem cable and a terminal, [Michael] was able to connect to this ancient scope.

In the manual, [Michael] found a the serial commands for this scope. The most useful of these is a command that prints out the contents of the scope’s trace memory as a series of 1-byte integers. With a short bit of PERL programming, [Michael] can create a PDF plot of whatever is on the scope’s screen. It’s formatted perfectly for Gnuplot, MATLAB, or even Excel.

Awesome work, and especially useful given these old scopes are slowly making their way to a technological boneyard somewhere.