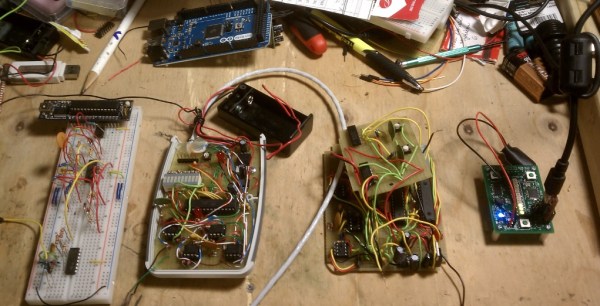 [David Nghiem] has been working with circuitry designed to read signals from muscles for many years. After some bad luck with a start-up company, he didn’t give up and kept researching his idea. He has decided to share his innovations with the hacker community in the form of a wearable suit that reads muscle signals.

It turns out that when you flex a muscle, it gives off a signal called a Surface ElectroMyographic signal, or SEMG for short. [David] is using an Arduino, digital potentiometer and a bunch of op amps to read the SEMG signals. LEDs are used to display the signal levels.

The history behind [David’s] project dates back to the late twentieth century, which he eloquently points out – “Holy crap that was a long time ago”. He worked with the MIT Aero Astro Lab and the Boston University Neuromuscular Research Center where he worked on a robotic arm for astronauts. The idea being to apply an opposing force to the arm to help prevent muscle deterioration.

Be sure to check out [David’s] extensive and well documented work, along with the several videos showing his projects at various stages of completion. If this gives you the electromyography bug, check out this guide on detecting the signals and an application of the concept for robotic prosthesis.

END_OF_DOCUMENT_TOKEN_TO_BE_REPLACED 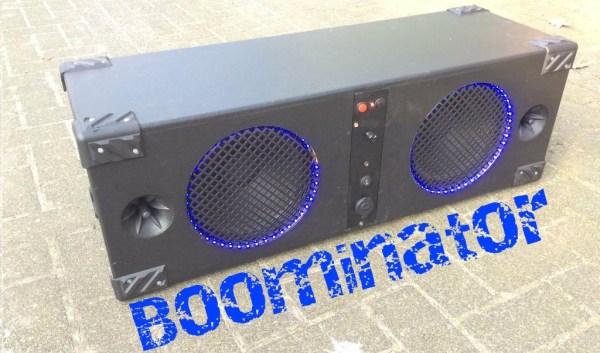 You have a greater chance of squeezing 5 amps through a 2N2222 than you do remembering the 1980s and not thinking about the legendary ‘boom box’. They could be seen perched on the shoulders of rockers and rappers alike – many sporting the Members Only or red leather jackets. The boom boxes visual characteristics can best be described as a rectangular box with two very large speakers on each end. It is no accident that The Boominator shares these features.

[Jesse van der Zouw] did a good job of showing how he created The Boominator. It has not two, but four 10 inch woofers that delivers 360 degrees of awesomeness at 115dB. The on board battery can sustain it for up to twenty hours, and the project is topped off with some blue LED rings the encircle each speaker.

We’ve seen boom boxes here before, but this is the first with some nice LED accents. Be sure to check out this build and let us know what you might have done differently.

So you just scored a vintage piece of test gear, or maybe you just bought a fancy new DMM (Hmm…We love that new multimeter smell!) But can it read voltage accurately? How can you be sure? Well, that’s why you should build yourself a voltage reference box.

Youtuber [Scullcom’s] latest video has you covered. Wants some specs? Sure. How does a precision 10v and 5v output with only ±0.025% and an amazing 2.5ppm/°C sound? That’s very impress for something you can cobble together yourself.  We find it interesting that he actually uses some ebay parts to pull off this build. The LiPo battery, USB LiPo charging circuit, and boost regulator are all sourced from ebay. Not to worry though, as these parts are only used to supply power to a 15 volt linear regulator. The real magic happens in the Texas Instruments REF102 precision voltage reference. You give it a decently clean 12-36 volts, and it will give you a 10 volt reference out.  These amazing chips are able to obtain such precision in part because they are calibrated (or more specifically “laser trimmed”) from the factory. A secondary output of 5 volt is achieved by using a differential amplifier.

Warning: The video after the break is a bit on the long side(43 mins), so you might want to make some popcorn. But we find [Scullcom’s] teaching style to be lovely, and he does a wonderful job of explaining the project start to finish, soup to nuts. END_OF_DOCUMENT_TOKEN_TO_BE_REPLACED 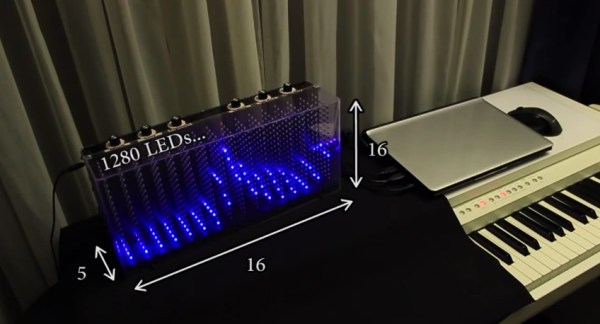 One of [Dooievriend]’s friends recently pressed him into service to write software for a 3d spectrum analyzer/VU that he made. The VU is a fairly complex build: it’s made up of 1280 LEDs in a 16x16x5 matrix controlled by a PIC32 clocked at 80MHz. [Dooievriend] wrote some firmware for the PIC that uses a variation on a discrete Fourier transform to create a 3D VU effect.

When [Dooievriend] set out to design the audio analyzing portion of the firmware, his mind jumped to the discrete Fourier transform. This transform calculates the amplitude in a series of frequency bins in the audio—seemingly perfect for a VU. However, after some more research, [Dooievriend] decided to implement a constant Q transform. This transform is very similar to a Fourier transform, but it takes into account the logarithmic way that the human ear interprets sound.

[Dooievriend] started implementing the constant Q transform using an interrupt-based sampler, but he quickly ran into issues with slow floating-point math on his PIC32 (which doesn’t have a hardware floating-point unit). Thankfully he rewrote his code using fixed-point math, and the transform runs nearly real-time. Check out the video after the break to see the VU in action, and a second video that gives some details on the hardware build.

END_OF_DOCUMENT_TOKEN_TO_BE_REPLACED

We don’t find smartwatches to be supremely usable yet. This one sets a definition for usefulness. The Enigma machine is of course the cipher process used by the Germans during World War II. This Enigma Machine wristwatch is not only functional, but the appearance is modelled after that of the original machine. With the speckled gray/black case and the Enigma badge branding [Asciimation] has done a fine job of mimicking the original feel.

Driving the machine is an Arduino Pro Mini. We’ve seen Arduino Enigma Machines in the past so it’s not surprising to see it again here. The user interface consists of an OLED display at 128×64 resolution, three buttons, with a charging port to the right and on/off switch on the left.

The device is demonstrated after the break. Quite a bit of button presses are used to set up each of the three encoder wheels. But that’s hardly avoidable when you’re not committing to a full keyboard. We’re pretty impressed by the functionality of [Asciimation’s] interface considering it’s hardware simplicity.

This seems perfect for kids that are proving to have an interest in engineering. They learn about ciphers, embedded programming, and mechanical design and crafting (this is a hand-sewn leather wristband). Of course if you build one and start wearing it into the office we won’t judge.

END_OF_DOCUMENT_TOKEN_TO_BE_REPLACED

The Midwest RepRap Festival isn’t just people hanging out with their 3D printers all weekend; There are also people bringing all the things they made with their 3D printers. There was an R2D2 and half of a B1 Battle Droid, a 3D printed quadcopter and of course 3D printed weaponry. [Ryan] and [Kane] from Mostly Harmless Arms brought a collection of their totally not trademark infringing not-Nerf guns.

The guys have a few designs for guns that shoot silicone-tipped extruded foam darts much further than a Nerf gun. There’s a bow, a more traditional spring-powered blaster, and a crossbow. All the designs with the exception of a few pipes and tubes and springs are 3D printed, and all the parts are small enough to fit on an 8″ bed. The darts are made with a dome mold for silicon and insulation foam that’s normally wedged in window and door frames. They’re dusted with cornstarch to prevent sticking, although in the video below there were a few jams. That’s to be expected; there was a camera around.

END_OF_DOCUMENT_TOKEN_TO_BE_REPLACED 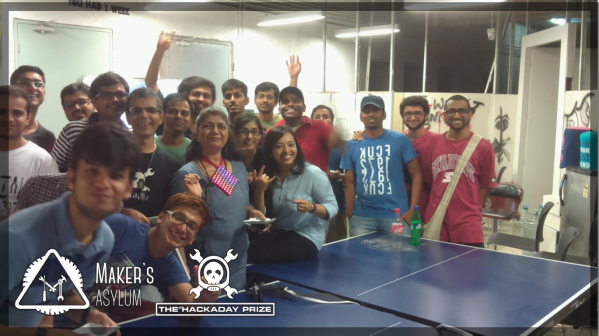 Several weeks before we launched the Hackaday Prize 2015 officially, I was asked to set up a local event in Mumbai to help spread the word about the event to local Makers. Since I also help run a local maker space, Makers’ Asylum, we decided to have a Bring-a-Hack evening on March 21st at the Asylum.

It was a packed day at the Asylum. We had an Aeromodeling workshop in the morning. One bunch was building a quad bike from old bicycle frames, and another was doing something similar using PVC pipes. A third bunch was building a work table from a recycled wooden pallet. All this before we even hit lunch hour. I set up my OpenSelfie photobooth, and everyone quickly wolfed down a lunch of Biryani. We started off late in the afternoon with a quick round of introductions.

Calm before the Storm

Media streaming over the internet using a cloud server

First up was Siji Sunny, who quickly setup his latest hack – an Intel Atom NUC running Ubuntu + a WiFi router and he had media streaming over the local network from his Phone. Something like AirPlay, but using open source software – ffmpeg, ffstream and ffserver.