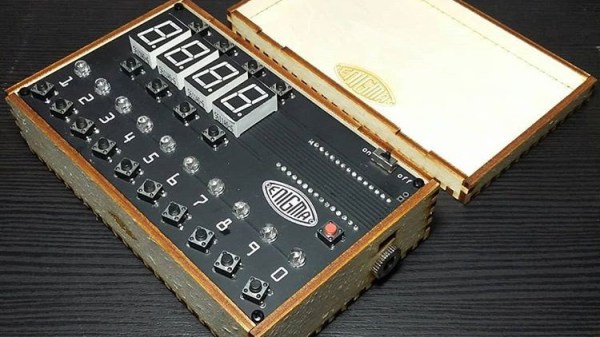 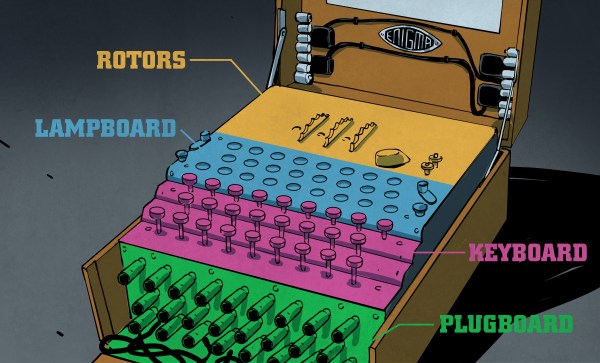 To many, the Enigma machine is an enigma. But it’s really quite simple. The following is a step-by-step explanation of how it works, from the basics to the full machine.

Possibly the greatest dedicated cipher machine in human history the Enigma machine is a typewriter-sized machine, with keyboard included, that the Germans used to encrypt and decrypt messages during World War II. It’s also one of the machines that the Polish Cipher Bureau and those at Britain’s Bletchley Park figured out how to decipher, or break. Most recently the story of how it was broken was the topic of the movie The Imitation Game.

Let’s start with the basics.

END_OF_DOCUMENT_TOKEN_TO_BE_REPLACED

[Asciimation], who previously created an Enigma Machine wristwatch, decided to go all-in and make a 3D-printed Enigma machine. Not a perfect replica, but rather an improved version that works the same but doesn’t concern itself with historical accuracy. For instance, the current step involves building the keyboard. Rather than trying to re-create the spring-and-pin method of the original, he simply swapped in readily available, double-throw micro switches.

This project has a tremendous amount of fascinating detail. [Asciimation] did his research and it shows; he downloaded blueprints of the original and used hacked digital calipers to precisely measure each rotor’s teeth, so that it could be re-created for printing. He even re-created the Enigma font to ensure that his printed rotor wheels would look right–though in doing so he discovered that the original machine used one typeface for the keyboard, one for the wheels, and one for the indicator lamps.

We previously published [Asciimation]’s Enigma machine wristwatch project, where he simulated the functionality of an Enigma with an Arduino.

END_OF_DOCUMENT_TOKEN_TO_BE_REPLACED

[Sam Greydanus] created a neural network that can encode and decode messages just as Enigma did. For those who don’t know, the Enigma machine was most famously used by the Germans during World War II to encrypt and decrypt messages. Give the neural network some encrypted text, called the ciphertext, along with the three-letter key that was used to encrypt the text, and the network predicts what the original text, or plaintext, was with around 96-97% accuracy.

The type of neural network he used was a Long Short Term Memory (LSTM ) network, a type of Recurrent Neural Network (RNN) that we talked about in our article covering many of the different types of neural networks developed over the years. RNNs are Turing-complete, meaning they can approximate any function. [Sam] noticed the irony in this, namely that Alan Turing both came up with the concept of Turing-completeness as well as played a big part in breaking the Enigma used in World War II.

END_OF_DOCUMENT_TOKEN_TO_BE_REPLACED

The Enigma machine as used by the German military during World War Two exerts a curious fascination among our community of hardware hackers and makers. Perhaps it is the mechanical complexity of the machine itself, or maybe the tale of how its encoded messages were decrypted by Allied codebreakers that contributes to this interest, but whatever it is we’ve seen a succession of Enigma-related projects over the years that shows no sign of abating.

The latest Enigma project to come our way is a particularly nice one from a group of first year students at CentraleSupélec Rennes, in Northwestern France. Their Réplique Enigma is a fully mechanical Enigma replica using 3D printing techniques, and unlike so many replicas which use modern electronics it has a set of rotors just like those you would have found in the original. The rotors themselves have a 3D-printed plastic shell which houses brass contacts and the associated writing, while the keyboard and lamp board are both made from plywood. Rather than trying to replicate the original switches from the keyboard they are using modern microswitches, however the keys themselves are upright posts that resemble the original. An AZERTY layout may not have been present on the real Enigma machines, but lends a pleasing twist to the build.

It’s worth browsing all the pages for this build, as the front page does not necessarily capture the whole build. The rotors set this Enigma apart from many of the replicas we’ve featured in the past, so you may find it interesting to take a look and make a few comparisons.

Hacking has always brought more good to the world than not hacking. The successful efforts of the Allies during World War II in deciphering the Enigma machine output still reminds us of that. Today, the machine is a classic example of cryptography and bare-metal computing.

We have covered quite a few DIY Enigma machines in the past, yet 14 years old [Andy] really impressed us with his high school science fair project, a scratch built, retro-modern Enigma machine.