CNC machines can be very noisy, and we’re not talking about the kind of noise problem that you can solve with earplugs. With all those stepper motors and drivers, potentially running at high-speed, electrical noise can often get to the point where it interferes with your control signals. This is especially true if your controller is separated from the machine by long cable runs.

But electrical noise won’t interfere with light beams! [Musti] and his fellow hackers at IRNAS decided to use commodity TOSLINK cables and transmitter / receiver gear to make a cheap and hackable fiber-optic setup. The basic idea is just to bridge between the controller board and the motor drivers with optical fiber. To make this happen, a couple of signals need to be transmitted: pulse and direction. They’ve set the system up so that it can be chained as well. Serializing the data, Manchester encoding it for transmission, and decoding it on reception is handled by CPLDs for speed and reliability.

The team has been working on this project for a while now. If you’d like some more background you can check out their original design ideas. Design files from this released version are up on GitHub. A proposed improvement is to incorporate bi-directional communications. Bi-directional comms would allow data like limit-switch status to be communicated back from the machine to the controller over fiber.

This optical interface is in service of an open-source plasma cutter design, which is pretty cool in itself. And if the IRNAS group sounds familiar to you, that may be because we recently ran a story on their ambitious gigabit ethernet-over-lightbeam project.

A few weeks ago [Jasper Ruben] built his cats a jumbo size hamster exercise wheel. They seemed to like it, so he decided to up the ante and upgrade it. The wheel now features a Raspberry Pi which can track speed, calculate distance traveled, and determine the equivalent running speed of [Jasper’s] feline companions.

To calculate the speed of the wheel, [Jasper] is using a small coil sensor (similar to how bicycle speedometers work). Six nails in the wheel trigger the sensor. Once the data is on-board the Pi, some simple calculations allow [Jasper] to provide a few different metrics on how effective the cat exercise is. A webcam sends a live stream of the wheel online with a data overlay for your viewing pleasure.

The really cool part is that this setup lets [Jasper] track when (and if) the cats actually use the exercise wheel. So far it seems like they use it about six times a day, with an average of a minute per walk — typically early in the morning between 5 and 8AM. That’s better than some of our own exercise habits!

END_OF_DOCUMENT_TOKEN_TO_BE_REPLACED

Western Digital introduced their second revision of the PiDrive this week. This is a native USB hard drive – formatted to 314GB – based on the WD Blue drive. The earlier version of the WD PiDrive was 1TB, and cost about $70 USD. The new, 314GB version, sells for about $35. Does Western Digital manufacture 314GB hard drives? No, that would be stupid. Who’s taking bets on the actual capacity of these drives?

[SopaXorsTaker] has introduced us to a brand new way of removing BGA chips. PCBs are usually more flexible than chips, and a few whacks with a hammer is all that’s needed.

For the last few months, [quarterturn] has been upgrading a PowerBook 520. He’s trying to replace the CPU with a 68040 that has an FPU. His first attempt failed, and his second attempt – a new Freescale part that certainly has an FPU – also failed. It’s great experience in desoldering and reworking fine-pitch QFP parts, but [quarterturn] has no idea why the Apple System Profile reports an FPU-less CPU. It might be something in the ROM that tells the PowerBook not to use the FPU, in which case the obvious upgrade would be to replace the ROM with one from a PowerBook 550c or a Sonnet upgrade card. If you have either of those, I’m sure [quarterturn] would like to have a word with you.

LIDAR! We all know what the coolest use of LIDAR is, but it’s also useful for robots, drones, and other autonomous thingamadoos. Here’s a Kickstarter for a LIDAR module, 40 meter range, 360 degree range, 500 samples per second, and UART/USB connections.

[Bill] is trying to start a Makerspace in Fort Lauderdale. Here’s the indiegogo campaign.

We launched the 2016 Hackaday Prize this week. Why should you enter? Because last year, it seemed everyone who entered early won something. There’s $300,000 worth of prizes on the line. Need an idea? [Dave Darko] has just the thing for you. It’s the Hackaday Prize Buzzword Generator, the perfect thing for spitballing a few ideas and seeing what sticks. 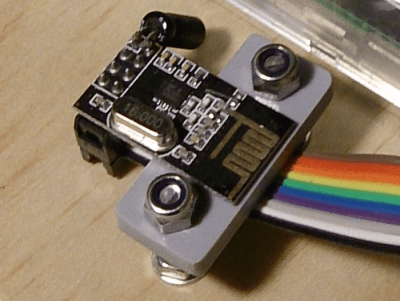 It’s safe to say that the Internet of Things is high on the list of buzzwords du jour. It was last seen rapidly ascending towards the Peak of Inflated Expectations on the Gartner Hype Cycle, and it seems that every startup you encounter these days is trying to place an IoT spin on their offering. Behind all the hype though lie some interesting wireless technologies for cheaply making very small microprocessors talk to each other and to the wider world.

Today we’d like to draw your attention to another wireless technology that might be of interest to Hackaday readers working in this area. UKHASnet is a wireless network developed from within the UK high-altitude ballooning community that uses cheap licence-exempt 868MHz radio modules in Europe and 915MHz in the Americas. The modules they are using have a surprisingly usable power output for licence exempt kit at 100mW, so the system has been designed for extensibility and bridging through nodes mounted on balloons, multirotors, or even seaborne buoys.

All UKHASnet packets are sent as human-readable plaintext ASCII, and the system borrows some of the features of amateur radio’s APRS. All packets are considered unreliable, all nodes repeat the packets they receive with their own node ID appended, and there are gateway nodes that make the packets available to the internet. There is a repeat number built into each packet to stop packets continuing ad infinitum.

Building a node is a simple process, requiring only the radio module, a microcontroller, and a battery. As examples they provide an implementation for the Arduino, and one for the LPC810 microcontroller. Their preferred radio module is the HopeRF RFM69HW, however the system will be capable of running on other modules of the same type.

So far the UKHASnet people have proven the system over a 65km range, created nodes on the sea, attached it to quadcopters, and built a host of other nodes.

This network differs from its commercial counterparts in that it has no proprietary IP or licencing from a standards body. And despite the name, you don’t have to be in the UK to use it. All data is in the clear, and thus it is likely that you won’t see it in mass-market commercial products. But it is exactly these features that are likely to make it attractive to the maker community. Your scribe will probably not be the only person who goes away from this article to suggest that their local hackspace finds the space for a UKHASnet node.

This is the first time we’ve featured UKHASnet here at Hackaday. Plenty of projects using licence-free radio modules have made it onto these pages, though, including this extreme-range remote controller for model aircraft, and this weather station sensor network that could have probably found UKHASnet useful had its creator had it to hand.

END_OF_DOCUMENT_TOKEN_TO_BE_REPLACED 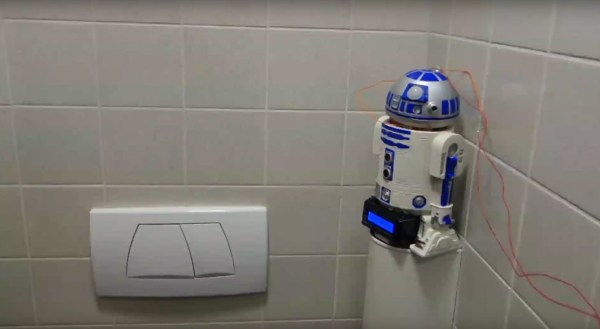 For a fun university project, [Cengizhan Can] and friends decided to make an automated air freshener for one of their bathrooms at the Utrecht University in the Netherlands. Happening to have an old R2-D2 plastic candy jar, they decided to try to see if they could make it Star Wars themed.

They loaded up the R2-D2 shell with an Arduino, a ton of sensors (don’t worry, nothing for spying) and an actuator for triggering the air freshener. During normal operation the LCD will display ambient temperature information and the approximate number of air freshener shots remaining in the canister. An external door sensor checks to see if the stall is open, and coupled with a light sensor, only sprays freshener after use, and when no one is in the stall anymore.
END_OF_DOCUMENT_TOKEN_TO_BE_REPLACED