Augmented reality is all the rage right now, and it’s all because of Pokemon. Of course, this means the entire idea of augmented reality is now wrapped up in taking pictures of Pidgeys in their unnatural setting. There are more useful applications of augmented reality, as [vijayvictory]’s Hackaday Prize entry shows us. He’s built an augmented reality helmet for firefighters that will detect temperature, gasses, smoke and the user’s own vital signs, displaying the readings on a heads up display.

The core of the build is a Particle Photon, a WiFi-enabled microcontroller that also gives this helmet the ability to relay data back to a base station, ostensibly one that’s not on fire. To this, [vijayvictory] has added an accelerometer, gas sensor, and a beautiful OLED display mounted just behind a prism. This display overlays the relevant data to the firefighter without obstructing their field of vision.

Right now, this system is fairly basic, but [vijayvictory] has a few more tricks up his sleeve. By expanding this system to include a FLIR thermal imaging sensor, this augmented reality helmet will have the ability to see through smoke. By integrating this system into an existing network and adding a few cool WiFi tricks, this system will be able to located a downed firefighter using signal trilateralization. It’s a very cool device, and one that should be very useful, making it a great entry for The Hackaday Prize.

Commuting is a pain. Luckily, nearly every car has some sort of radio or other audio player to while away the hours stuck in traffic. However, most of those radios sport AM and FM bands, along with a weather band and–maybe–a long wave band. What if you prefer shortwave?

[Thomas] posted a review of the BST-1, a car-friendly shortwave receiver. The device is made to mount out of sight–presumably near an external antenna. It beams the shortwave signal to the car’s FM radio. The control is a small key fob and even if you aren’t interested in the radio itself, the user interface design is somewhat interesting.

END_OF_DOCUMENT_TOKEN_TO_BE_REPLACED

Right now HOPE is dying down, and most of the Hackaday crew will be filtering out of NYC. It was a great weekend. The first weekend in August will be even better. We’re going to DEF CON, we’ll have people at VCF West, and a contingent at EMF Camp. If you’re going to EMF Camp, drop a line here. There will be Hackaday peeps wandering around a field in England, so if you see someone flying the Hackaday or Tindie flag, stop and say hi.

Raspberry Pi’s stuffed into things? Not all of them are terrible. The Apple Extended keyboard is possibly the best keyboard Apple ever produced. It’s mechanical (Alps), the layout is almost completely modern, and they’re actually cheap for something that compares well to a Model M. There’s also enough space inside the plastic to fit a Pi and still have enough room left over for holes for the Ethernet and USB ports. [ezrahilyer] plopped a Pi in this old keyboard, and the results look great. Thanks [Burkistana] for sending this one in.

A few months ago, [Sébastien] released SLAcer.js, a slicer for resin printers that works in the browser. You can’t test a slicer without a printer, so for the last few months, [Sébastien] has been building his own resin printer. He’s looking for beta testers. If you have experience with resin printers, this could be a very cool (and very cheap) build.

Anyone going to DEF CON? For reasons unknown to me, I’m arriving in Vegas at nine in the morning on Wednesday. This means I have a day to kill in Vegas. I was thinking about a Hackaday meetup at the grave of James T. Kirk on Veridian III. It’s about an hour north of Vegas in the Valley of Fire State Park. Yes, driving out to the middle of the desert in August is a great idea. If anyone likes this idea, leave a note in the comments and I’ll organize something. 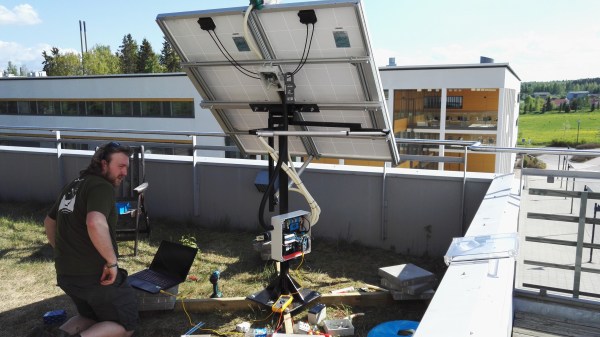 [Bruce Helsen] built this dual axis solar tracker as one of his final projects for school.

As can be experimentally verified in a very short timeframe, the sun moves across the sky. This is a particularly troublesome behavior for solar panels, which work best when the sun shines directly on them. Engineers soon realized that abstracting the sun away only works in physics class, and moved to the second best idea of tracking sun by moving the panel. Surprisingly, for larger installations the cost of adding tracking (and its maintenance) isn’t worth the gains, but for smaller, and especially urban, installations like [Bruce]’s it can still help.

[Bruce]’s build can be entirely sourced from eBay. The light direction is sensed via a very clever homemade directional light sensor. A 3D printer extruded cross profile sits inside an industrial lamp housing. The assembly divides the sky into four quadrants with a light-dependent resistor for each. By measuring the differences, the panel can point in the optimal direction.

The panel’s two axis are controlled with two cheap linear actuators. The brains are an Arduino glued to a large amount of solar support electronics and the online energy monitor component is covered by an ESP8266.

The construction works quite well. If you’d like to build one yourself the entire BOM, drawings, and code are provided on the instructables page.

[Scott Campbell] built a cassette-based synthesizer that sounds exactly like everything you’ve heard before. The sound generation comes straight off cassettes, but the brainbox of this synth varies the volume and pitch. It’s called the Onde Magnetique, and it is what you would get if you combined a Mellotron and Ondes Martenot.

The key component for the Onde Magnetique is a Sony cassette recorder that conveniently and inexplicably comes with a ‘tape speed input’ mini jack. By varying the voltage sent to this input jack, the speed of the tape, and thus the pitch of the sound being played, is changed. Build a box with a touch-sensitive button for volume, and a few tact switches for different speeds, and you have an electromechanical bastard child of a Mellotron and an Ondes Martenot.

By itself, the Onde Magnetique produces no sound – it only controls the pitch and volume of whatever is on the cassette. [Scott] produced a few single-note cassettes for his instrument, with ‘voice patches’ including a flute, choir, and a synth. With the CV and Gate input, these sounds can be sequenced with outboard gear, producing the wonderful sounds heard in the video after the break.

END_OF_DOCUMENT_TOKEN_TO_BE_REPLACED 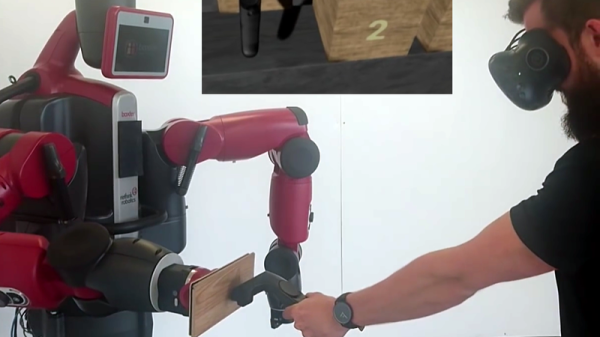 There isn’t a lot of detail to be found behind this short demo of robot-based physical feedback for VR, but the video (embedded below) demonstrates things well. It’s an experiment in generating force feedback for virtual objects using a Baxter robot and the HTC Vive. When the user presses against a wooden block in VR, the robot presses back which simulates the mass of the virtual object. Force feedback is one of these areas in which research is ongoing, and in a variety of different directions.

Like so many other things in life, nothing beats the real thing for actual physical feedback. Also, there’s something great about giving a $25,000 robot the job of impersonating a few simple wooden blocks in VR, just so you can strap on a VR rig and basically give a robot a realistic-feeling fist bump.