The Nintendo Power Glove was one of the amazing 1980s experiments in alternative user interfaces for video games. It was bad. It was cool, but it was bad. Recently, interest in the Power Glove has grown thanks to an amazing stop motion animator. Prices of these gloves have gone through the roof, and the Power Glove is in the middle of a resurgence not seen since the feature-length motion picture advertisement for Super Mario Bros. 3.

[Nolan Moore] is a fan of the Power Glove, and after finding a highly collectible new in box Power Glove, he decided to take this wearable to the next level. It’s now sporting custom circuit boards, it can control a drone, and talks wirelessly to every device on the planet. It’s also [Nolan]’s entry for the Hackaday Prize.

First up, the glove itself. [Nolan] was lucky enough to find a new, in shrink-wrapped plastic, Famicom Power Glove. His old one had been in storage for 27 years, and this new old-stock version gives him a beautiful matte glove, flex sensors that work, and brand new everything. You can take a look at the unboxing here.

A Power Glove is only as cool as the electronics inside, and that means tearing out the old boards, the old ultrasonic sensors, and a rats nest of wiring. This meant [Nolan] had to spin a few PCBs, integrating a Teensy, an IMU module, battery, and an ESP8266. This is the Power Glove as it would be invented today – perfection in 80s cyberpunk.

We first saw [Nolan]’s Power Glove at the Bay Area Maker Faire last summer. Here, [Nolan] was flying a quad around a netted cage, his replacement Power Glove electronics, and his fist-pumping grin. It’s a great project, and one we’re happy to show off in the Hackaday Prize.

No one watches video anymore. Cable cutters are digging into Verizon’s profits, and YouTube is a shadow of its 2005 self. What are people consuming now? Animated gifs. This is the bread and butter of the meme economy. Personally, all my investments are sunk deep into Gandolf / Balrog gifs, with each character replaced with Trump and Hillary. I expect a tidy profit on November 9th.

With animated gifs being the de facto method of sharing moving pictures, the world will belong to those who can create them. Phones are fine, but strangely video cameras, DSLRs, and other high-end photography equipment are the norm. This is idiotic, of course, because high-definition images are just a fad, and audio is useless.

Finally, there’s an answer. [Nick Brewer] created a camera that only takes animated gifs. I cannot stress this enough: this animated gif cam is a serious contender for a technical Oscar. Kubrick wept.

For the hardware, [Nick] went with a Raspberry Pi and Raspberry Pi camera. A combination of software ranging from PiCamera, GraphicsMagick, and GifCam turns this tiny bit of hardware into a machine dedicated to content creation in the hippest new medium. Other hardware includes a battery – either a normal LiPo ‘pouch’ cell, or an 18650 cell. Other hardware includes an Adafruit Powerboost 500 charge controller and a neat illuminated push button.

The 3D-printed enclosure is where this project really shines. Hearkening back to an older time, this camera includes a real viewfinder for all your gonzo giffing. The camera is charged through a completely normal USB port, and even the Pi’s SD card is accessible without disassembling the camera. There are even some paper wrappers for this camera to give it a 90s disposable camera aesthetic.

Pave the path to learning and win prizes:

Just teach us a how to do something awesome with a Pi. (See more entries)

It’s the Hack ‘O Lantern edition! First up, Slic3r is about to get awesome. Second, Halloween is just around the corner, and that means a few Hackaday-branded pumpkins are already carved. Here’s a few of them, from [Mike] and [yeltrow]:

The latest edition of PoC||GTFO has been released. Holds Stones From The Ivory Tower, But Only As Ballast (PDF and steganography warning). This edition has a reverse engineering of Atari’s Star Raiders, [Micah Elisabeth Scott]’s recent efforts on USB glitching and Wacom tablets, info on the LoRa PHY, and other good stuff. Thanks go to Pastor Manul Laphroaig.

Oh cool, we can be outraged about something. The Freetronics Experimenters Kit is a neat little Arduino-based ‘Getting Started In Microcontrollers’ kit. This kit was sold by Jaycar. Recently, Jaycar ripped off the kit and sold it under the Duiniotech name. The box was copied, the instruction manual was copied, and there’s a lot of IP being violated here. Can Freetronix do anything? Legally, yes, but it’s not worth it.

[Oscar] broke his phone, but it still works great as an SMD soldering camera/microscope thing.

Pobody’s Nerfect in Australia so here’s a 3D printed didgeridoo. What’s a didgeridoo? It’s an ancient instrument only slightly less annoying than bagpipes. It’s just a tube, really, and easily manufactured on any 3D printer. The real trick is the technique that requires circular breathing. That’s a little harder to master than throwing some Gcode at a printer.

[Chris Downing] is the master of mashed up, condensed, and handheld game consoles. His latest is another N64 portable, and it’s a masterpiece. It incorporates full multiplayer capability, uses an HDMI connector for charging and to connect the external breakout box/battery, and has RCA output for full-size TV gameplay. Of note is the breakout board for the custom N64 chip that puts pads for the memory card and a controller on a tiny board. 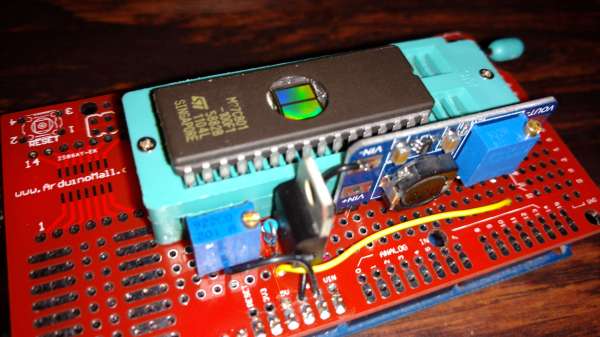 Most video game manufacturers aren’t too keen on homebrew games, or people trying to get more utility out of a video game system than it was designed to have. While some effort is made to keep people from slapping a modchip on an Xbox or from running an emulator for a Playstation, it’s almost completely impossible to stop some of the hardware hacking that is common on older cartridge-based games. The only limit is usually the cost of an EPROM programmer, but [Robson] has that covered now with his Arduino-based SNES EPROM programmer.

Normally this type of hack involves finding any cartridge for the SNES at the lowest possible value, burning an EPROM with the game that you really want, and then swapping the new programmed memory with the one in the worthless cartridge. Even though most programmers are pricey, it’s actually not that difficult to write bits to this type of memory. [Robson] runs us through all of the steps to get an Arduino set up to program these types of memory, and then puts it all together into a Super Nintendo where it looks exactly like the real thing.

If you don’t have an SNES lying around, it’s possible to perform a similar end-around on a Sega Genesis as well. And, if you’re more youthful than those of us that grew up in the 16-bit era, there’s a pretty decent homebrew community that has sprung up around the Nintendo DS and 3DS, too.

Thanks to [Rafael] for the tip!

[Elliot] (no relation, but hey, cool name!) wrote in with his OpenFixture model for OpenSCAD. It’s awesome because it takes a small problem, that nonetheless could consume an entire day, and solves it neatly. And that problem is making jigs to test assembled electrical products: a PCB test fixture.

In the PCB design software, you simply note down the locations of the test points and feed these into the OpenSCAD model. ([Elliot] shows you exactly how to do it using KiCAD.) There are a few more parameters of the model that you can tweak to match your particulars, but you should have a DXF outline for a test jig in short order. Cut that out, assemble, and test.

If you have to make more than a few handfuls of a complicated circuit, it becomes worth it to start thinking about testing them systematically. And with this OpenSCAD model, you can have the test jig up and running before the first prototype boards are back in from the fab. How cool is that? 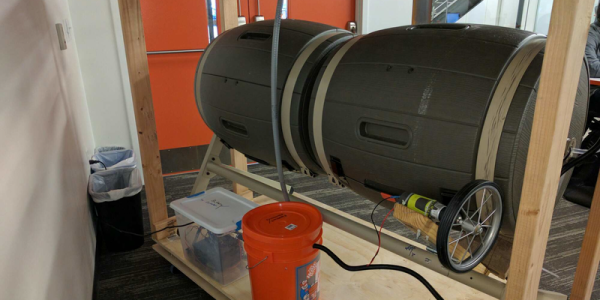 A lot of people are scared of composting. After all, if the temperatures or humidity go badly wrong, you can end up with dried-out trash or a stinking soup. Getting the balance right is a secret known to the ancients: toss it in a big pile in your backyard. But what if you don’t have a big backyard?

Amalgamate is a composting setup for the urban dweller, or for people who just don’t like bugs. [Jamie] built it as her first Raspberry Pi project, and that makes it a great entrée into the world of things. But it’s no lightweight: the software measures temperature and humidity, and lets you schedule watering and rotating the compost. And of course, if you’re a micromanager, you can get up-to-the-minute vitals on your cellphone and tweak everything to run just perfectly. END_OF_DOCUMENT_TOKEN_TO_BE_REPLACED 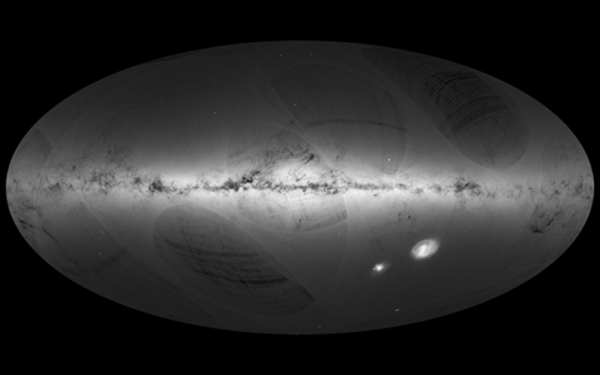 If you are an astronomy buff, there are plenty of star maps you can find in print or online (or even on your Smartphone). But if you are a science fiction fan (or writer), you probably find those maps frustrating because they are flat. Two stars next to each other on the map might be light years apart in the axis coming out of the page. A star 3.2 light years from Sol (our sun) looks the same on the map as a star 100 light years away.

The Gaia satellite (an ESA project) orbits beyond the moon and is carefully mapping the 3D position of every point of light it sees. [Charlie Hoey] took the data for about 2 million stars and used WebGL to give you a 3D view of the data in your web browser.