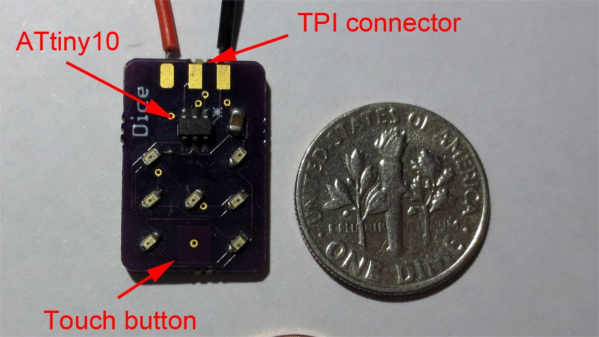 [Tim]’s Dice10 is an exercise in minimalism. Building an electronic dice using an ATtiny10 with code that fits within 1kB is not too difficult. Charlieplexing the LED’s would have used three of the four available GPIO pins. [Tim] upped the game by using just two GPIO pins to drive the seven LED’s for the dice. A third GPIO is used as a touch button input. Besides the ATtiny and the LED’s, the only other component used is a capacitor across the supply inputs.

The LED’s are grouped in three pairs of two LED’s and a single centre LED. Usually, Charlieplexed LED’s are connected across pairs of GPIO pins. But his scheme includes connections to the 5V and GND terminals, besides the two GPIO pins. Building a truth table makes it easy to figure out what’s going on.

Only the logic states used are listed in the table. It’s possible to add two more LED’s between PB0 and GND and one more anti-parallel with LED9, making a total of 10 LED’s driven by two pins. That’s quite a hack. The important thing here is to have two LED’s in series in the arms that connect to either 5V or GND.

[Tim] has posted  the code and hardware source files on his Github repo, and his blog post has some additional details on how he solved the problem.

If you’re looking for more inspirations on minimal dice designs, check this “PIC powered pair of electronic dice” which uses a PIC 12F629 with five outputs driving a pair of 7 pips to make a dual dice. 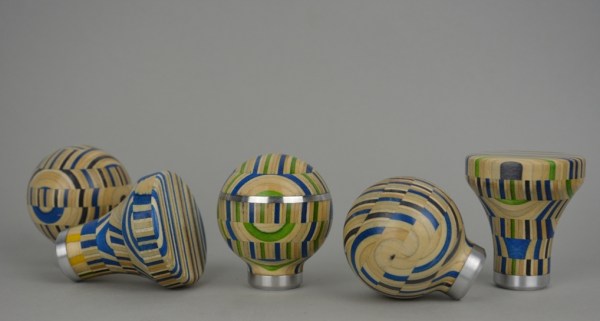 Do you have a car? Does that car have a manual transmission? Do you want to beautify your shifter knob, while simultaneously gaining mad street cred, yo? Well, you’re in luck, because all of that can be done for the low, low price of a couple old skateboard decks, a lathe, and a lot of glue.

This project, from [basiltab] illustrates how you can use old skateboard decks to create really cool looking custom shifter knobs. The process starts with cutting the decks up into uniform strips, which are then glued and clamped to form small planks. Sections of the decks were alternated, to create a visually interesting pattern. The planks are then sanded so that they’re smooth and flat, and then glued up in a jig to form blocks with a threaded aluminum insert in the center. Optionally, aluminum can be used for some of the layers to add a little flair (2-part epoxy was used in place of glue for the aluminum).

After the glue has dried, the blocks can then be turned on a lathe to create the desired shape of the knob. As you can see, the results are pretty darn nifty. And, they certainly have a little more artistic credibility than the giant acrylic shifter knobs you normally find at your local auto parts store. Don’t worry, if you thought this article was about shift registers, we’ve got you covered there too.

Our first 3D printers only printed ABS and PLA plastic. Yeah, we heard about PVA for support structures, but no one could get them to stick. There was also polycarbonate, but you had to have an all metal hot end with a fan to print that stuff. Now there’s a lot of variety out there: flexible, wood and stone, nylon, PETG, and more.

If you are still printing with just the old standards, you might enjoy [all3dp’s] comparison chart of 30 different filament types–that’s enough for one day a month–well at least for four months. It is too many for February, and a day short for the rest of the months. In addition to a table, there’s a short write-up about each type of plastic, its characteristics, and its technical data. There’s even magnetic PLA (see video below) which, in addition to being magnetic, will actually rust in water which might be good for some artistic prints.

END_OF_DOCUMENT_TOKEN_TO_BE_REPLACED

We’re not sure why [lujji] would want to hack ST’s ST-Link programmer firmware, but it’s definitely cool that he did, and his writeup is a great primer in hacking embedded devices in two parts: first he unpacks and decrypts the factory firmware and verifies that he can then upload his own encrypted firmware through the bootloader, and then he dumps the bootloader, figures out where it’s locking the firmware image, and sidesteps the protection.

[lujji]’s project was greatly helped out by having the firmware’s encryption keys from previous work by [Taylor Killian]. Once able to run his own code on an intact device, [lujji] wrote a quick routine that dumped the entire flash ROM contents out over the serial port. This gave him the bootloader binary, the missing piece in the two-part puzzle.

If you’ve ever broken copy protection of the mid-1990’s, you won’t be surprised what happened next. [lujji] located the routine where the bootloader adds in the read protection, and NOPped it out. After uploading firmware with this altered bootloader, [lujji] found that it wasn’t read-protected anymore. Game over!

We glossed over a couple useful tips and tricks along the way, so if you’re into reversing firmware, give [lujji]’s blog a look. If you just want a nice ARM programmer with UART capabilities, however, there’s no reason to go to these extremes. The Black Magic Probe project gives you equal functionality and it’s open source. Or given that the official ST-Link programmers are given away nearly free with every Nucleo board, just buying one is clearly the path of least resistance. But a nice hack like this is its own reward for those who want to take that path. Thanks, [lujji] for writing it up.

Morse code, or CW, is a subject that divides the amateur radio community from top to bottom. For some it’s a faded anachronism, while for others it’s the purest form of the art. With it no longer in significant commercial or military use it is radio amateurs who keep it alive, and those for whom it is a passion devote considerable effort to its continuing use.

With well over a century of history behind it there are a huge array of morse keys available to the CW enthusiast. From vintage telegraph keys through WW2 surplus military keys to sideways “bug” keys and modern boutique handcrafted keys, many operators will amass a collection for the love of it, and regularly use them all.

Other operators create their own keys, either crafting them from raw materials or using whatever materials they have at hand. Keys have been made from every conceivable piece of junk that will conduct electricity, and made contacts to all parts of the world.

[H. P. Friedrichs, AC7ZL] has produced such a home-made key from surplus material, but it has nothing of the junkbox about it. He’s used the head actuator from a surplus hard drive as the arm of a straight key, and the result is an item of beauty.  The actuator bearing is the pivot point, and the business end of the key replaces the hard drive’s heads. The spring is provided by the repulsive force between magnets, the connection at the rear is provided by a piece of guitar string, and the contacts themselves are taken from a surplus power relay. Even his write-up is a thing of beauty, a compelling read with hand-drawn illustrations. If you are not a Morse enthusiast it’s still an engaging project.

We’ve featured many keys here over the years, and this isn’t the first one using a hard drive actuator, as this mint tin paddle shows. Among others we’ve linked you to a collection of unorthodox keys, and of course shown you a vintage telegraph key with a Raspberry Pi decoder.

If you were a computer enthusiast in the late 1980s or early 1990s, the chances are that one of your objects of desire would have been a Commodore Amiga. These machines based on the 68000 line of processors and a series of specialized co-processors offered the best compromise between performance and affordability at the time, with multitasking, a GUI, and graphics capabilities that were streets ahead of their competition.

The Amiga story is littered with tales of what might have been, as dismal marketing and lacklustre product refreshes caused it to lurch from owner to owner and eventually fade away from the mainstream in the mid 1990s. But it’s been one of those products that never really died, as a band of enthusiasts have kept a small market for its software and hardware alive.

Earlier this year we showed you a prototype of an unusual graphics card, a modern GPU implemented on an FPGA board that brought up-to-date HDMI monitor support to the Zorro expansion slots found in the big-box Amigas. It’s thus very interesting today to find that the board made it to market, and that you can buy one for your Amiga if you have a spare 189 Euros (now sold out but taking pre-orders for another production run). Producing any niche electronic product is a significant challenge, so it is always positive to see one that makes it.

As well as HDMI output the board features a micro SD card slot that is mountable as an Amiga volume, and an expansion header that is toured as “Hacker friendly”. Best of all though, the whole board is open-source with all resources on a GitHub repository, so as well as reading our coverage of the prototype you can immerse yourself in its internals if that is your thing.

It’s always good to see a new piece of hardware for an old computer see the light of day, though it’s fair to say this development won’t revive the Amiga platform in the way that the Raspberry Pi has for RiscOS. Still, the mere fact of an open-source Zorro FPGA implementation being released should mean that other cards become possible, so we await developments with interest. 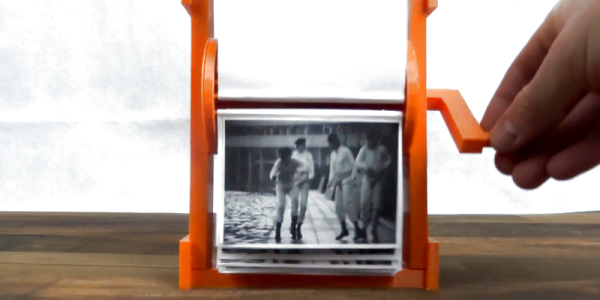 [John] got his hands on a 3D printer, and did what any hacker with a new toy would, printed himself a Mutoscope. (A what?) A Mutoscope is an early flip-book based motion picture machine, and in this case it displays 24 frames from “A Clockwork Orange”. [John]’s 3D-printed machine is, not coincidentally we assume, printed in orange plastic.

The model for the frame is up on Thingiverse, but there’s not all that much to it, honestly. It’s a frame and a few wheels that hold some skewers in place. The rest of the work is making the flaps.

But getting to the end product wasn’t a straight walk. [John] describes all of the starts and stops in his blog, aptly named “Fail Try Again”. We like seeing the whole process rather than just the final, seventh, iteration of the device.

Where to take this project next? We want to see a design with a mounting bracket for a cheap stepper motor built in. We’ve always wanted our own custom signage, and there’s nothing cooler than the flap-flap-flap noise that flip book pages make when being switched. We must not be alone in thinking so, because we’ve seen two beautiful DIY builds in the last two years: this one done in multiples for advertising purposes and this one done just for the lulz. [John]’s project is a lot simpler, and thus a lot more accessible. We hope it inspires a few of you to make your own.