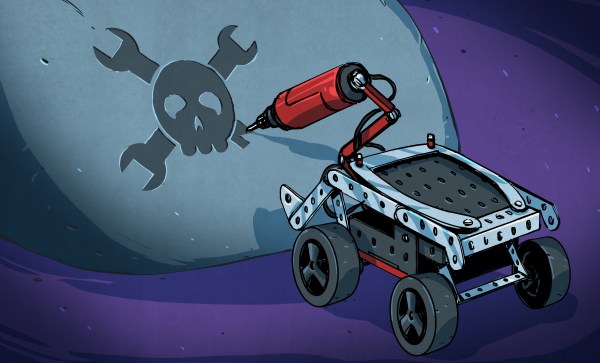 I have some aluminum building-set parts on hand and just got a second rotary tool, so I thought I’d try my hand at making a light-duty CNC mill—maybe carve up some cheap pine or make circuit boards. This post explores some of the early decisions I’m facing as I begin the project.

Of primary importance is the basic format of the mill’s chassis. Gantry configuration or put everything in a box of girders? How will the axes move–belts or racks? How will the Z-axis work, the assembly that lowers the tool onto the material? Finally, once the chassis is complete, or perhaps beforehand, I’ll need to figure out how I intend to control the thing.

END_OF_DOCUMENT_TOKEN_TO_BE_REPLACED 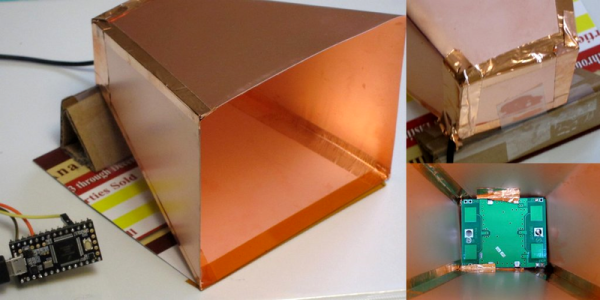 [JBeale] squeezed every last drop of performance from a $5 Doppler radar module, and the secrets of that success are half hardware, half firmware, and all hack.

On the hardware side, the first prototype radar horn was made out of cardboard with aluminum foil taped around it. With the concept proven, [JBeale] made a second horn out of thin copper-clad sheets, but reports that the performance is just about the same. The other hardware hack was simply to tack a wire on the radar module’s analog output and add a simple op-amp gain stage, which extended the sensing range well beyond the ten feet or so that these things are usually used for.

With all that signal coming in, [JBeale] separates out the noise by taking an FFT of the Doppler frequency-shift signal. Figuring that people walk around 2.2 miles per hour, [JBeale] focuses on the corresponding 70 Hz frequency bin and finds that the radar will detect people out to 80 feet. Wow!

This trick of taking an el-cheapo radar unit and amplifying the signal to do something useful isn’t new to Hackaday. [Mathieu] did it with the very same HB-100 unit way back in 2013, and then again with a more modern CDM324 model. But [JBeale]’s hacked horn and clever backend processing push out the limits of what you can expect to do with these cheap units. Kudos. 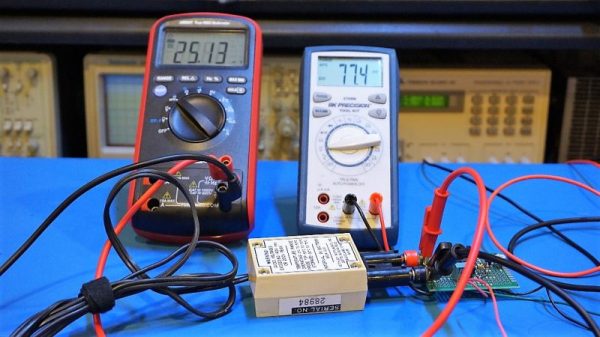 Everyone knows how to convert from Celsius to Fahrenheit, right? On a digital thermometer you just flick the little switch, on a weather app you change the settings, or if worse comes to worse, you let Google do the math for you. But what if you want to solve the problem the old-fashioned way? Then you pull out a few op amps and do your conversions analog style.

We’ve seen before how simple op amp circuits can do basic math, and the equation that [Kerry Wong] wants to solve is even simpler. Recalling the old Tf = 9/5·Tc + 32 formula (and putting aside the relative merits of metric versus traditional units; we’ve had enough of that argument already), [Kerry] walks us through a simple dual op amp circuit to convert the 1 mV/°C output of a thermocouple module to 1 mV/°F. The scaling is taken care of by a non-inverting amplifier with resistors chosen to provide a gain of 1.8, while the offset is handled by a differential amplifier that adds 32 mV to the scaled input. Strategically placed trimmers allow [Kerry] to tweak the circuit to give just the right conversion.

For jobs like this, it’s tempting to just use an analog input on an Arduino and take care of conversions in code. But it’s nice to know how to do it old school, too, and hats off to [Kerry] for showing us the details.