Although you don’t hear about it very much over the clamor of emulating old video game systems, one of the biggest uses of the Raspberry Pi outside its educational roots is in industry. The Pi makes for a great industrial control system, and if you mount it to a DIN rail, you’re golden. This is the biggest reason the Pi foundation is still making the Pi 1, and it’s one of the big motivations behind the Pi Compute Module.

Now that the Pi Compute Module 3 and 3+ have been out for a while, it’s only fitting that these modules get a great carrier board. The balenaFin 1.1 is out now, and it’s the perfect carrier board for the Pi compute module.

Balena (formerly resin.io) is a software stack designed for managing fleets of Linux devices, and there’s no better example of that than a factory filled with Pis fiddling relays and such. Balena has found its way from tracking sea turtles to monitoring oil rigs, and with that comes a need for a developer kit. The Pi compute module is supposed to have a very long support life, so the obvious solution is to make a great carrier board for this fantastic module.

Features of note include two camera connectors, PoE (with a Hat), USB headers, an RGB indicator LED, an industrial temperature range, and a case designed for a DIN rail. So far, so goo, but there’s also a microcontroller with a Bluetooth radio that can operate without the compute module being turned on, and an RTC for time-based operation. There’s a mini PCI express slot designed for cellular modems, and a SIM card slot just for fun.

While most Pi builds we see could make use of these features, they are assuredly one-off builds. You’re not going to be deploying hundreds of Pis if you need to 3D print an enclosure for each one. That’s when actual engineers need to get involved, and if you’re doing that, you might as well go with the Raspberry Pi compute module. If you’re looking for a fleet of Pis, you could do worse than to look at this very nice compute module carrier board.

SD cards have largely supplanted most other card-based storage devices, in all but a few niches. Available in standard, micro, and the rather obscure mini sizes, they’re used in everything from digital cameras to car stereos and console ROM carts. For most users, storing them consists of tossing them in a bag, occasionally in a plastic case that’s barely any bigger than the card itself for a little extra protection. This can get frustrating when carrying multiple cards, but [Dranoweb] has a solution.

[Dranoweb]’s design is similar to a Swiss Army knife, repurposed with many fingers, each with slots for holding everyone’s favourite storage devices. All the parts barring the screw are 3D printed. There are various designs of the storage fingers, allowing the build to be customized to suit varying quantities of SD and microSD cards. There’s even a deep-pocketed piece for USB drives and small adapters, and an oversized design for Nintendo DS carts.

It’s a tidy design that makes it that much less likely you’ll lose your microSD in the bottom of your backpack. Now, if you need to interface with an SD card, we can help you there too.

END_OF_DOCUMENT_TOKEN_TO_BE_REPLACED

If you’re the kind of person who’s serious about using open source software and hardware, relying on a medical device like a pacemaker or an insulin pump can be a particular insult. You wouldn’t trust the technology with your email, and yet you’re forced to put your life into the hands of a device you can’t examine yourself. Unfortunately we don’t (yet) have any news to report on open source pacemakers, but at least now there’s an open software and hardware hearing aid for those who need it. 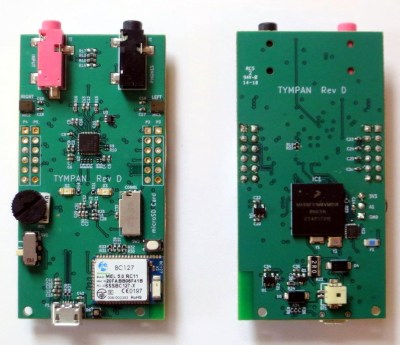 The Tympan project aims to develop a fully open source hearing aid that you can not only build yourself, but expand and modify to fit your exact specifications. Ever wanted to write code for your hearing aid with the Arduino IDE? No problem. You want Bluetooth, I2C, and SPI? You got it. In truth we’re not sure what this kind of technology makes possible just yet, but the point is that now those who want to hack their hearing aids have a choice in the matter. We have no doubt the community will come up with incredible applications that we can’t even begin to imagine.

But these open hearing aids aren’t just hackable, they’re affordable. Traditional hearing aids can cost thousands of dollars, but you can buy the Tympan right now for $250. You don’t even need to check with your health insurance first. Such a huge reduction in price means there’s a market for these outside the hardware hacking crowd, and yet another example of how open source can put cutting edge technology into the hands of those who would otherwise have to go without.

The latest version of the Tympan hardware, revision D, is powered by the Teensy 3.6 and features a Sierra Wireless BC127 Bluetooth radio, dual MEMS microphones, and even a microSD slot for recording audio or logging data. It might be a bit bigger than the traditional hearing aids you’re used to seeing, but with an external microphone and headphone setup, the wearer could simply keep it in their pocket.

We’ve seen DIY hearing aids before, but unless you’re willing to carry a breadboard around with you, they’ve generally been limited to proof of concept sort of builds. We’re glad to see a mature project like Tympan join the growing movement for open source medical hardware; it’s a another big step forward towards democratizing these critical pieces of technology.

You’ve probably seen the videos of a grape — cut almost totally in half — in a microwave creates a plasma. A recent physics paper studies the phenomenon with a lot of high-tech gear and now the actual mechanism is known. [Veritasium] interviews the scientists and explains the grape plasma phenomenon in plain language. You can see the video below or read the paper directly.

END_OF_DOCUMENT_TOKEN_TO_BE_REPLACED

We salute hackers who make technology useful for people in emerging markets. Leigh Johnson joined that select group when she accepted the challenge to build portable machine vision units that work offline and can be deployed for under $100 each. For hardware, a Raspberry Pi with camera plus screen can fit under that cost ceiling, and the software to give it sight is the focus of her 2018 Hackaday Superconference presentation. (Video also embedded below.)

The talk is a very concise 13 minutes, so Leigh flies through definitions of basic terms, before quickly naming TensorFlow and Keras as the tools she used. The time she saved here was spent on explaining what convolutional neural networks are and how they work, just enough to prepare the audience. But all of that is really just background, the meat of the talk is self-contained examples that Leigh has put together and made available online. I love to see that since it means you go beyond just watching and try it out for yourself. END_OF_DOCUMENT_TOKEN_TO_BE_REPLACED