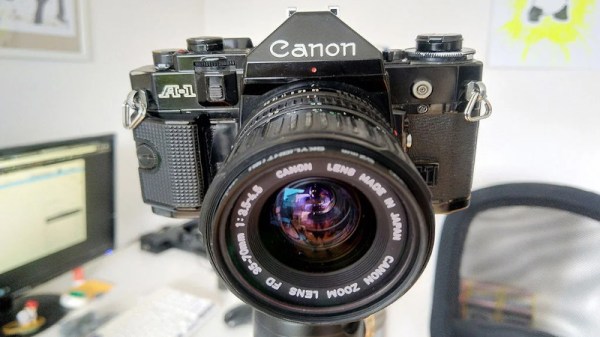 The unarguable benefits of digital photography has rendered the analog SLR obsolete for most purposes. This means that a wide selection of cameras and lenses are available on the second hand market for pennies on the dollar, making them ripe targets for hacking. [drtonis] decided to experiment with a quick and easy digital conversion to an old Canon A-1, and it’s got us excited about the possibilities.

It’s a simple hack, but a fun one. The SLR is opened up, and the spring plate for holding the film is removed. A Raspberry Pi camera then has its original lens removed, and is placed inside the film compartment. It’s held in with electrical tape, upon a 3mm shim to space it correctly to work with the original optics.

[drtonis] notes that the build isn’t perfect, with some aberration likely caused by the reflective electrical tape in the film cavity. However, we think it’s a nice proof of concept that could go so much further. A Raspberry Pi Zero could be easily squeezed inside along with the camera, and everything glued in place to make things more robust. A specialist paint such as Stuart Semple’s Black 2.0 could also help cut down on light leaks inside. Plus, there’s plenty of small screens that can be used with the Raspberry Pi that would provide a useful preview function.

We’d love to see more conversions like this one. While it’s unlikely they’ll compete with commercial DSLRs on outright performance, everyone loves a little bit of charming distortion here and there, and all manner of fancy lenses can be had for cheap for analog platforms. We’ll be keeping a close eye on the tipline for further This fundevelopments – you know what to do!

END_OF_DOCUMENT_TOKEN_TO_BE_REPLACED 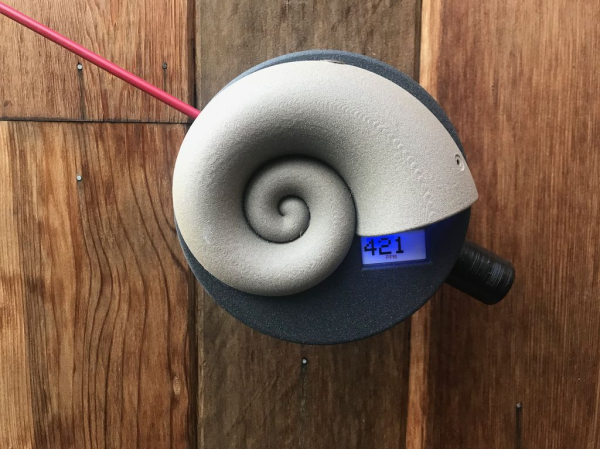 Most of us are aware that trees turn CO₂ into oxygen, but we’d venture to guess that many people’s knowledge of this gas ends there. Is it feast or famine out there for the trees? Who can say? We admire [rabbitcreek]’s commitment to citizen science because he’s so focused on making it easy for people to understand their

environment. His latest offering, a giant analog CO₂ meter, might be our favorite so far.

The brains of the operation is an Adafruit Feather Adalogger. It reads the CO₂ sensor that’s mounted close to the business end of the nautilus, and becomes the quill that writes the CO₂ value to a FeatherWing e-ink screen. For the giant needle, this lovely meter uses one of those fiberglass poles you mark your driveway with so you can find it under a blanket of snow. The needle is counter-balanced with washers encased in printed plastic.

As you can see in the GIF, there’s a decent delay between the CO₂ blast and the needle response — we like to imagine the CO₂ spiraling slowly through the nautilus like a heavy, ill wind on its way to gravely move the needle.

Want a way to monitor air quality that’s a bit more discreet? Slip this portable meter into your pocket. 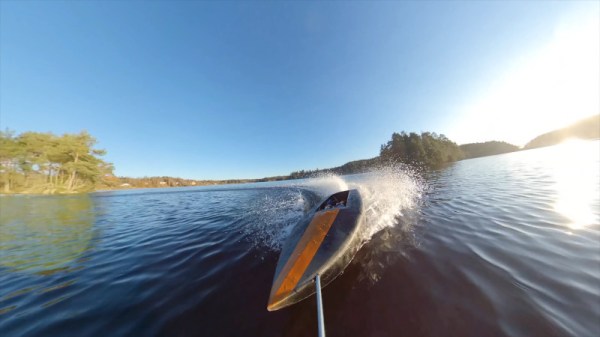 Radio control projects used to be made of materials such as metal or wood, and involve lots of hand crafted parts. That’s still one way to go about things, but 3D printing has become a popular tool in recent years. [RCLifeOn] has been working on a 3D printed jet boat, which recently got a serious power upgrade.

The boat in question received a 5000W brushless motor – significant power for a vehicle weighing less than 2kg. Powered by a 12S lithium pack, and outfitted with a water jacket for cooling, it drives the boat through an off-the-shelf turbine after initial attempts to DIY the drivetrain were unsuccessful.

The biggest problem in the project came from coupling the motor to the turbine. A 3D printed coupler was unable to hold up to the strain, while attempts to make a metal part failed due to the lack of a lathe. Eventually the solution was found by daisy chaining two off-the-shelf parts together.

The boat proved itself ably on the water, with the large motor proving more than capable of shifting the boat at a strong clip. It’s an excellent shakedown for the parts that will eventually find themselves in a powered surfboard build. We’ve seen [RCLifeOn]’s work before, too, like these stylish 3D printed sneakers. Video after the break.

END_OF_DOCUMENT_TOKEN_TO_BE_REPLACED 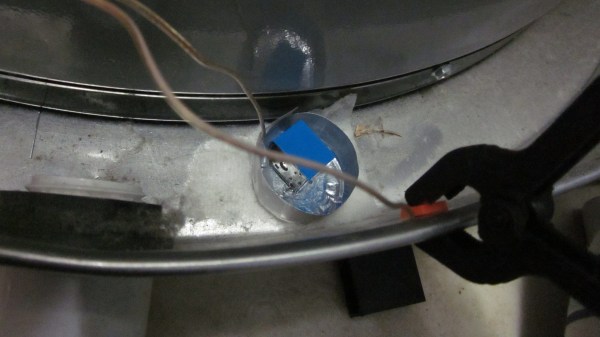 [mcu_nerd] is like any engineer, which is why his problem of an occasionally leaky water heater sure looks like a research project with no end in sight. Sure there’s probably a commercial product out there that can be had for half the cost and a few clicks of the mouse, but what’s the point in actually solving the problem?

His log starts with research into detecting low battery voltages. Then it was a quick exploration in designing low-power circuits. When the Flexible PCB contest came along, he realized that there was a chance to design a better electrode, and he ended up winning one of the vouchers; which is where he’s at now.

It’s definitely a work in progress, and if anything it’s just a quick five minute read and an opportunity to commiserate with another wayward soul. We do like his clever use of a tealite candle tin as both the second electrode and case for his water detection circuit. There are also some KiCad files and code. 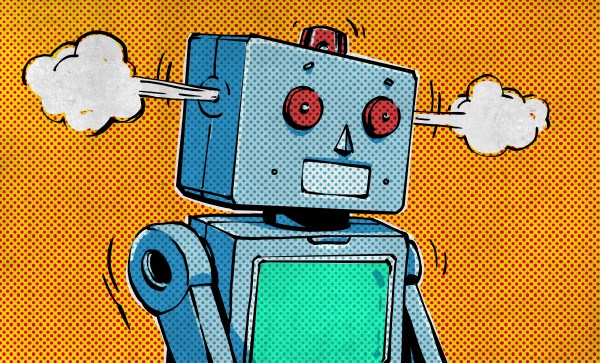 Bad news if you bought several Insignia-branded smart devices from Best Buy. The company has decided to shut down the back end systems that make them work — or at least work as a smart device. On the chopping block are smart outlets, switches, a security camera, and an upright freezer. If you bought, say, the freezer, it will still keep things cold. But the security camera will apparently be of no use at all now that the backend systems have gone dark. The company is offering an unspecified partial refund to users of the affected devices.

Best Buy announced this in September, and the shutdown date was last week on November 6th. Not all Insignia products are impacted, just the ones that rely on their app.

Anytime we talk about cloud-based technology, there are always a few people who say something like, “I’ll never rely on anything in the cloud!” Perhaps they have a point — certainly in this case they were right. There are really two things to consider: hardware devices that rely on the cloud, and data that resides in the cloud. In some cases, one product — like a camera — might have both.

END_OF_DOCUMENT_TOKEN_TO_BE_REPLACED 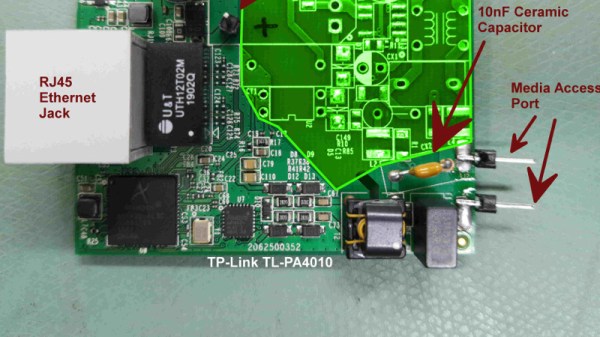 We’re used to extending our network connections and being no longer constrained in our use of Ethernet by proximity to a switch or hub. Our houses routinely contain wireless networks, and of course powerline-Ethernet units passing data over our mains wiring. [Peter Franck] had a similar problem but without the mains power, for a distributed sprinkler system he needed to send Ethernet over DC cables.

The solution is a surprisingly simple one, taking one of those powerline Ethernet units and converting it by removing its mains power section. These devices contain the Ethernet and powerline modem chip with its associated circuitry, and a small switch-mode power supply. He’s removed the power supply and put in a capacitive coupling to the DC cabling, resulting in a relatively inexpensive DC powerline network device.

Powerline Ethernet devices are not without their own issues, for instance they are not popular with radio amateurs due to their effect on the RF noise floor. We’d therefore be curious to see what the RF emissions are like for this hack, but we still think it’s a useful weapon in the armoury as well as something to do with all those surplus powerline Ethernet bricks.