We love Pong clocks because they’re showpieces. This particular offering, called the Wise Clock, is the third hardware revision of the project. The LED display is dead simple since they’re using a 32×16 bi-color module from Sure Electronics. If you don’t want to design and build your own multiplexing display this is a somewhat inexpensive and high-performance alternative.

After the break you can see that the paddle movements look very realistic. They move like a human player might, which is quite often not the case with these clocks. If you want to see how that’s done, check out the code which was originally developed by [123led] for a different project.

END_OF_DOCUMENT_TOKEN_TO_BE_REPLACED 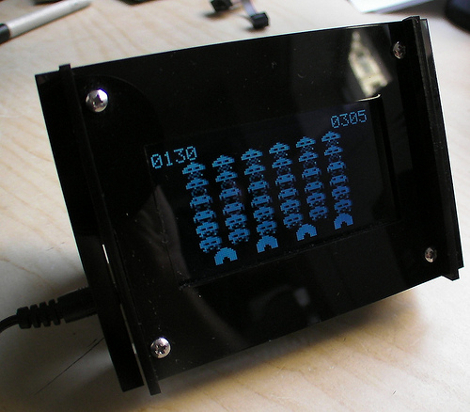 Space Invaders came out in 1978, six years after Pong. That means this Space Invaders clock uses newer technology, right? Nope, it’s the same hardware as the Adafruit Pong Clock with some updated firmware. Still, as you can see after the break, the effect is pretty nice. Pong was cool, but having a clock that scrolls through several classic games would be cooler.

[Dataman], the guy responsible for this firmware hack shared his code. It should be easy enough to alter it for any clock using a KS0108 graphic LCD screen. So what’s next? Can someone pull off a black and white Ms. Pac-Man that looks decent on the 128×64 display?

END_OF_DOCUMENT_TOKEN_TO_BE_REPLACED [funnypolynomial] saw this Pong clock years ago and had been planning on building his own version. With a move looming he decided it was finally time to finish up his Pong clock since completed projects take far less room than incomplete ones. The core of the system is a ThinkPad. He separated the hinge and bolted the keyboard to the back of the screen. The display ribbon was long enough, but he had to extend the wires for the backlight. The power button was also extended and the battery removed. The software is a Windows screen saver that uses the two mouse buttons for navigation similar to how you set a two button watch. Every minute the the left player misses the ball and the right player’s score increases. You can see a video of the clock below. In the past, he also turned a digital multimeter into a clock. END_OF_DOCUMENT_TOKEN_TO_BE_REPLACED 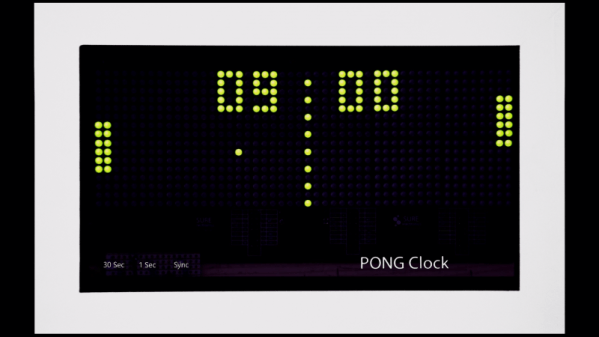 Would you play a game of Pong where each set lasts exactly one minute and the right player is guaranteed to win 60 times more than the left player? Of course not, but if you were designing a clock that displays the time using a Pong motif, then perhaps it would make sense.

There are some neat design tips in [oliverb]’s Pong Clock that are worth taking a look at. Foremost is the case, which is a retasked jewelry box with a glass lid, procured on the cheap from eBay. It’s a good size for a clock meant to be seen from across the room, and already finished to fit into modern decor. The case holds all the goodies, from the 24×16 green LED matrix display to the Uno that runs the show, as well as an RTC module, a sound chip, a temperature sensor, and a PIR module to turn the display off when the room is unoccupied. To prevent disrupting the sleek lines of the case, all the controls are mounted in a remote panel, itself a clean and modern-looking device thanks to the chrome-plated duplex outlet cover used to house it. The clock has several display modes, from normal time and temperature to a word clock, as well as the Pong mode, where the machine plays itself and the score shows the time. It’s fascinating to watch, and we like everything about it, although we think the tick-tock would drive us nuts pretty quickly.

We recently covered the life and times of [Ted Dabney], one of Pong’s fathers and co-founder of Atari. We tend to think he’d like the design of this clock, both as a nod to his game and for its simple but functional design.

END_OF_DOCUMENT_TOKEN_TO_BE_REPLACED [PT] let us know that Adafruit Industries has just release a pong clock kit. The $80 price tag might seem a bit steep but it does come with a custom-ordered KS0108 display in order to get white on black like the classic video game, as seen after the break. Also included is the laser-cut case, an ATmega328 microcontroller, RTC, and all the other bits needed to get this working.

We just saw a pong clock built on a breadboard using a KS0108 display but that one used a PIC processor. Adafruit always open-sources their designs and code so you can head over to the kit details page if you already have the hardware on hand to throw this together.

END_OF_DOCUMENT_TOKEN_TO_BE_REPLACED 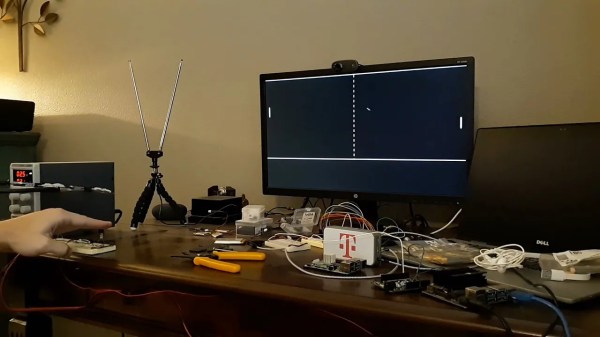 Even as technology keeps progressing, we find ourselves coming back to the classics again and again. Pong is quite possibly the classic game, and the Raspberry Pi Pico is one of the latest microcontrollers. So [Nick Bild] combined them expertly in his Pico Pong project, which includes gesture controls and a custom VGA output.

Rolling your own VGA signal is no simple feat, and this project takes full advantage of the Pico’s features to pull it off. Display data is buffered in memory, while a Programmable I/O (PIO) program reads straight from the buffer via Direct Memory Access (DMA) and writes straight to the display. This allows for nanosecond-precision while leaving the CPU free to handle inputs and run the game. Even with the display work offloaded, the ARM processor had to be massively overclocked at 258 MHz, well over its 133 MHz specs, to make things run smoothly. And still [Nick] found himself limited to a 640×350 resolution and serendipitously-retro-accurate monochrome color scheme.

Gesture controls come from a pair of IR light beams hooked up to the GPIO. IR LEDs shine up toward reflectors, and the light bounces back down to detectors. Blocking one of the beams causes your paddle to move up or down, which looks pretty responsive in the video (embedded below).

We’ve seen [Nick] play Pong before, though at that time it was handheld and based on the venerable 6502. And just recently we wrote about the Raspberry Pi Pico powering another classic game: Snake.