Our love for solar projects continues on with this method to make your own solar panels. [Mike] built a 60 watt solar panel from individual solar cells he purchased off eBay. Procuring parts off of eBay normally causes others hardship when they try to duplicate the project, however in this case there are so many types of cells people can use to produce their own unique solar panel. Even cells that are extremely damaged my still be used, as in this example. To charge a 12 volt battery the number of cells in series just needs to be 16-18 volts, and the rest in parallel will supply more current. Charging a battery without a charge controller is not recommended, but commercial ones are easily had. Those not interested in jumping all the way in with solar may want to test the waters by building their own panel and putting it to use as a charging station for your portable gadgets.

We’re skeptical about most technology that’s designed to help remote villages (yes, even that one), but these new UAV medical couriers look like a great idea. The turn around time for medical sample analysis in remote South African villages can be excruciating. A team of engineers have attempted to adapt two different unmanned aerial vehicles for transport of medical samples. These could be either blood or saliva that needs testing. Test results would be relayed via phone as they are now, but the initial transport time would be much faster. The larger of the two UAVs can carry up to 500g; that’s enough to haul two units of blood for transfusion. The UAVs can be launched by hand and can survive winds up to 45kph. They fly their preprogrammed routes autonomously and don’t require any operator intervention. The team has flown two successful trials and is waiting for approval from the South African Civil Aviation Authority. For safety, they’re only transporting samples that can be sterilized before flight. New Scientist has a short video after the break. END_OF_DOCUMENT_TOKEN_TO_BE_REPLACED

[funnypolynomial] saw this Pong clock years ago and had been planning on building his own version. With a move looming he decided it was finally time to finish up his Pong clock since completed projects take far less room than incomplete ones. The core of the system is a ThinkPad. He separated the hinge and bolted the keyboard to the back of the screen. The display ribbon was long enough, but he had to extend the wires for the backlight. The power button was also extended and the battery removed. The software is a Windows screen saver that uses the two mouse buttons for navigation similar to how you set a two button watch. Every minute the the left player misses the ball and the right player’s score increases. You can see a video of the clock below. In the past, he also turned a digital multimeter into a clock. END_OF_DOCUMENT_TOKEN_TO_BE_REPLACED 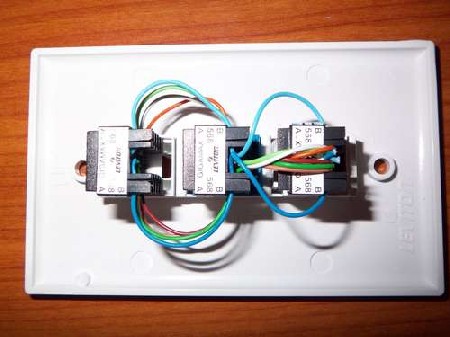 Making a passive network tap can be an easy and inexpensive undertaking as shown in this Instructable. Passive monitoring or port mirroring is needed because most networks use switches which isolate the network traffic and this does not allow for the entire network to be monitored.  This example uses a single tap, using multiple taps will provide access to the full-duplex data separately. By using two taps you are able to monitor inbound data that is passed through one tap, and outbound data that is passed through the other tap.  Separate taps are desired because most sniffer software handles half-duplex traffic only and requires two network cards for full-duplex.

END_OF_DOCUMENT_TOKEN_TO_BE_REPLACED

Apparently, Apple has decided that extending DRM to your Nike accessories will keep hackers at bay.  Sick of people cutting the sensors out of their Nike shoes for use on other apparell, they have applied for a patent. Ever noticed the warning that it’s illegal to pull the tag off of a mattress?  Did that stop you?