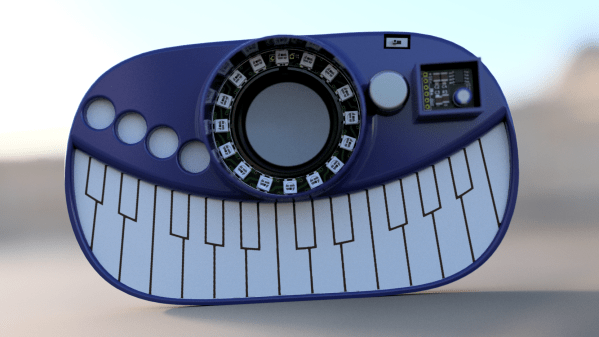 Stylish! is a wearable music synthesizer that combines slick design with stylus based operation to yield a giant trucker-style belt buckle that can pump out electronic tunes. With a PCB keyboard and LED-surrounded inset speaker that resembles an eyeball over a wide grin, Stylish! certainly has a unique look to it. Other synthesizer designs may have more functions, but certainly not more style. 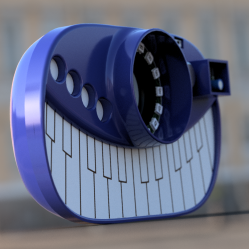 The unit’s stylus and PCB key interface resemble a Stylophone, but [Tim Trzepacz] has added many sound synthesis features as well as a smooth design and LED feedback, all tied together with battery power and integrated speaker and headphone outputs. It may have been originally conceived as a belt buckle, but Stylish! certainly could give conference badge designs a run for their money.

The photo shown is a render, but a prototype is underway using a milled PCB and 3D printed case. [Tim]’s Google photo gallery has some good in-progress pictures showing the prototyping process along with some testing, and his GitHub repository holds all the design files, should anyone want a closer look under the hood. Stylish! was one of the twenty finalists selected for the Musical Instrument Challenge portion of the 2018 Hackaday Prize and is therefore one of the many projects in the running for the grand prize! 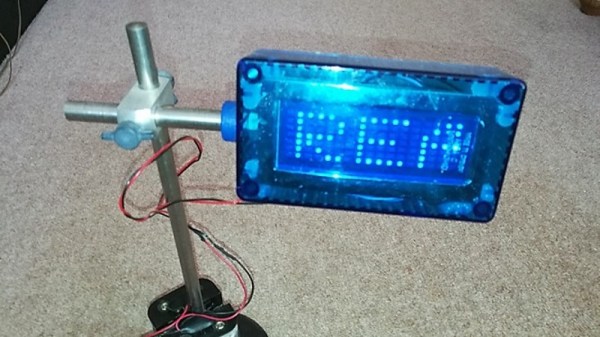 What a time to be alive! The range of things you never knew you needed but absolutely must have expands at a breakneck pace, such that it’s now possible to pick up a belt buckle with an embedded LED matrix to scroll messages. We have no idea what the use case for something like this is, but some people will buy anything.

One such person was a friend of [Brian Moreau], who doubled down after being gifted the glowing bauble by turning it into a WiFi enabled Tweet-scrolling belt buckle. It appears to be a just for fun project, and to be honest one would need a heck of a belt for the buckle after his mods. He added an ESP8266 to take care of monitoring his Twitter account and driving the display on the belt buckle, a non-trivial task given that the thing is programmed with only two buttons that scroll through characters to compose a message. The microcontroller might have fit inside the original buckle or only added a little to its bulk, but [Brian] decided to replace the two coin cells powering it with an external 6-volt battery pack. That required a buck converter to power the ESP, so the whole thing ended up being thrown in a case and acting more like a neat display than a flashy fashion statement.

We’d bet some tradeoffs could be made to reduce the bulk and get that buckle back where it belongs, though. Once it does, maybe it’ll be part of a complete LED-laden ensemble, from head to toe. For some ungodly reason, [Scott] has a friend that wanted a ‘sexting themed’ Halloween costume. We won’t try to make any presumptions of the creativity or mental stability of [Scott]’s friend, but the SMS scrolling LED belt buckle he came up with is pretty cool.

The belt is based around a $13 scrolling LED belt buckle [Scott] found online. There was a problem with the belt buckle, though. Thirteen dollars means [Scott] didn’t get a whole lot of features with his buckle, so there are only 3 buttons on the entire device: letter up, letter down, and enter. Instead of pressing a button 80 times to get a lowercase ‘z,’ an Arduino was thrown into the mix to take care of all the button pressing.

The Arduino sketch could now input any message into the belt buckle in a matter of seconds. All that was left to do is taking care of the SMS to text part of the build. For this, [Scott] used the Sparkfun USB Host Shield and a custom Android app. Whenever an SMS is received on the phone, the message is sent through the USB shield to the Arduino and output on the belt buckle.

We won’t make any assumptions about the content of the messages during the Halloween party, but at least the video demo of the build is family friendly. Check it out after the break.