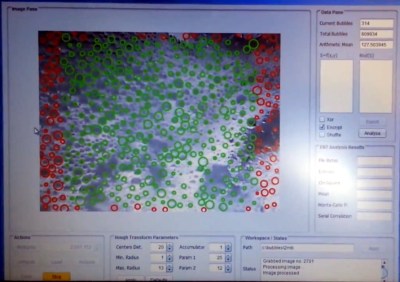 END_OF_DOCUMENT_TOKEN_TO_BE_REPLACED

Post an animation on Reddit of a workable machine that looks neat and does something cool and the next day someone will have built it. That’s what happened when [The-Big-Ship] uploaded an animation of a clever bubble making machine — though we had to look twice to convince ourselves that it wasn’t real. The next day [Over_Engineered_2] posted a video of his working one.

We often hear that you need precision CAD software such as Solidworks and AutoCAD to design a functional machine but the animation was done using Cinema 4D, used for films such as Iron Man 3 and Tron: Legacy. This shows that you can at least get a reassurance that the basic mechanics will fit and move together without having to design precision parts.

That’s not to say that reality didn’t interfere with implementing it though. In [Over_Engineered_2]’s video below he points out that the bigger ring of the original animation didn’t work with his small motor and propeller, and had to switch to the smaller ring. Also, note that the ring needed guide rails on the sides to keep it from twisting, something a real world ignoring animation can get away without. Check out the videos below to see the two in action.

END_OF_DOCUMENT_TOKEN_TO_BE_REPLACED END_OF_DOCUMENT_TOKEN_TO_BE_REPLACED

Making a bubble display is quite an undertaking, but [Jay] takes advantage of iterative design to construct this impressive (and at 60 tubes, massive) bubble display. The display functions by dispensing bubbles to serve as illuminated pixels in each tube as they rise through the fluid. His build log steps through the display’s construction with a keen attention to detail and above all, patience.

Rather than diving right in and slapping some tubes together, [Jay] took the time to research other bubble display projects, including one we featured a few years back that grew out of yet another HackaDay article. His prototypes started off small to test potential features: whether to use water or glycerin, timing for the air pumps and bubble size, and several others. [Jay] even filled the log with videos of every test, so you can watch the problems and solutions unfold at each step.

The finished display boasts sixty 30″ tall tubes, making it 64″ wide. [Jay] also installed RGB LEDs at every edge where the tubes meet to better distribute the light. You can watch one of the many videos of the display at work below.