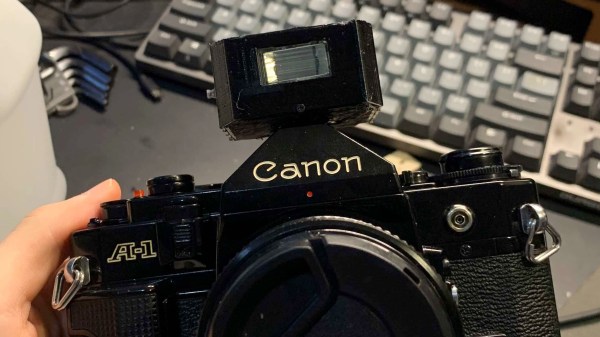 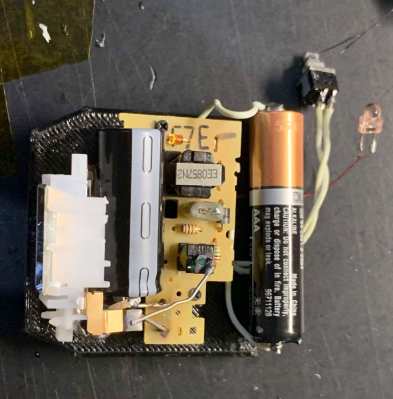 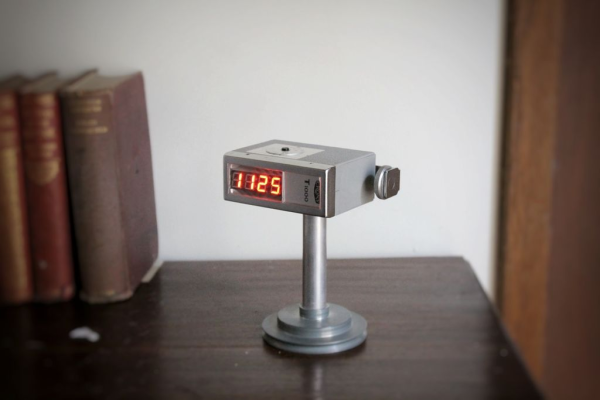 Now that everyone has a phone with a camera, we would bet that fewer people than ever are in the market for a nice vintage flash unit such as the one [lonesoulsurfer] chose for this cool clock build. But here’s something that never goes out of style — a clock that doubles as a conversation piece.

At the heart of this build is a dirt cheap clock unit meant for cars. It also displays the ambient temperature and has a voltage testing mode(!), which could come in handy someday. Although [lonesoulsurfer] didn’t connect a pair of probes, he did cut a wee hole for the temperature sensor to stick out of. He also cut off the SMD buttons and wired new momentaries to the outside of the case.

Although we really like the look of the textured plastic lens over the 7-segments, our favorite part might be the stand and the way [lonesoulsurfer] implemented it. He made a threaded rod by pounding a hex nut into the end of a piece of aluminium tubing, and then dropped a bolt through the bottom of the flash body before closing it up, so it screws on like a camera to a tripod. Take a second and check out the build video after the break.

We love a good clock so much that we just had a contest to find the coolest ways to tell time. In case you missed it, here are the best of the best.

END_OF_DOCUMENT_TOKEN_TO_BE_REPLACED 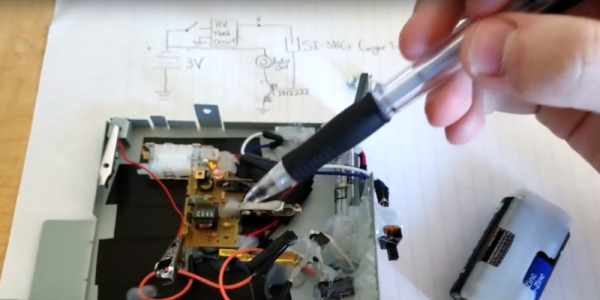 Scenario: your little three-hour boat tour runs into a storm, and you’re shipwrecked on a tropic island paradise. You’re pretty sure your new home was once a nuclear test site, but you have no way to check. Only your scrap bin, camera bag, and hot glue gun survived the wreck. Can you put together a Geiger-Müller counter from scrap and save the day?

Probably not, unless your scrap bin is unusually well stocked and contains a surplus Russian SI-3BG miniature Geiger tube, the heart of [GH]’s desert island build. These tubes need around 400 volts across them for incident beta particles or gamma rays to start the ionization avalanche that lets it produce an output pulse. [GH]’s build uses the flash power supply of a disposable 35mm camera to generate the high voltage needed, but you could try using a CCFL inverter, say. The output of the tube tickles the base of a small signal transistor and makes a click in an earbud for every pulse detected.

You’ll no doubt notice the gallons of hot glue, alligator clips, and electrical tape used in the build, apparently in lieu of soldering. While we doubt the long-term robustness of this technique, far be it from us to cast stones – [GH] shows us what you can accomplish even when you find yourself without the most basic of tools.

END_OF_DOCUMENT_TOKEN_TO_BE_REPLACED

The Raspberry Pi Camera is a great tool; it allows projects that require a camera to be put together quickly and on a budget. Plus, having a Linux back end for a little processing never hurt anybody. What can be difficult however, is imaging in low light conditions. Most smartphones have an LED flash built in for this purpose. [Wim Van Gool] decided to follow suit and build an LED flash for the Raspberry Pi.

The project consists of a custom PCB with surface-mount LEDs in an attractive concentric layout. This is a good way to get a nice even distribution of light, particularly when taking photos close up. The board is designed around the Texas Instruments TPS61169 LED driver, which is controlled by a PWM signal from the Raspberry Pi. The flash mounts as a Raspberry Pi HAT, and there’s a hole routed in the centre to allow the camera to fit in nice and snug when using standard 11mm standoffs. It might seem simple, but it’s an impressively tidy piece of engineering and a testament to [Wim]’s abilities.

The Raspberry Pi Camera turns up in all sorts of projects — like these far-seeing PiNoculars. 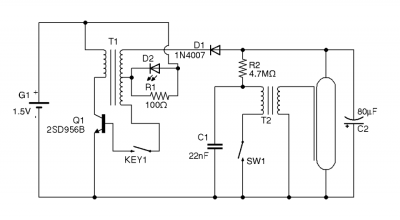