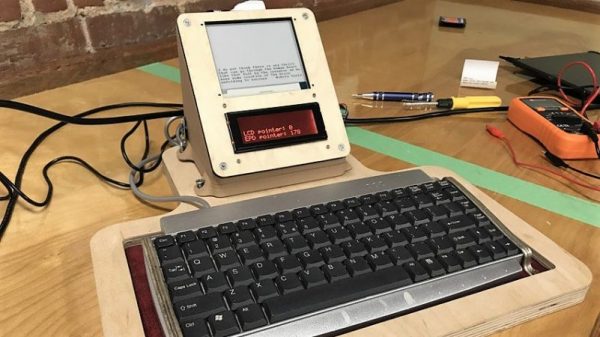 Living and working online is not always easy, especially when it comes to staying focused. All it takes is a moment’s weakness to click on something you shouldn’t and fall down a time-wasting and creativity-killing rabbit hole. Imagine how the creative juices would come to a boil if it were not for the attractive nuisances that lie as close as the next browser tab over.

Creativity-killing online temptations are too much for some to resist, which is why we find this homebrew electronic typewriter so intriguing. Dubbed “SPUDwrite”, or “Single Purpose User Device” by its creator [Lucian], the device is a completely unconnected writing terminal. At its heart, SPUDwrite is just a keyboard attached to an STM32F401 Cortex-M4 microcontroller running MBED and driving an e-paper display. Unfortunately, the refresh rate of the display is too slow to see what you’re typing, so [Lucian] included a small LCD display that shows the current text and where you are in the file. There’s also a thermal receipt printer for those times you just need to hold hardcopy in your hand. [Lucian] introduced the SPUDwrite in an Adafruit show-and-tell session, a clip of which is below the break.

SPUDwrite isn’t perfect, but [Lucian] has plans for version 2, including improving the refresh rate – [Ben Krasnow] might have a few tips on that score. But even as-is, we love the potential for distraction-free creativity while still being able to have an electronic copy of your writing. Our book might finally become a reality with one of these – as long as we can avoid the smartphone.

END_OF_DOCUMENT_TOKEN_TO_BE_REPLACED

Some people may remember the whistled platform I [limpkin] designed a while back, which recognizes different whistles to control your lighting. Recently, I designed a firmware that transforms the board into a word recognition device, as the 50MHz ARM Cortex M4’s processing capabilities are good enough to do so.

The simple algorithm works by correlating successive Fast Fourier Transforms (FFT) of the amplified microphone output with the FFTs of a template word previously stored in memory. Simply connect the Whistled to your power supply, say the word you’d like it to recognize and you’re good to go.

As you will see in the video embedded after the break (sorry for the accent…), I briefly explain basic principles about word/sound recognition and what you can do to improve your algorithm performances. The source files can be downloaded, as well as the code for my whistle detection algorithm which wasn’t available the first time we looked at the project.

END_OF_DOCUMENT_TOKEN_TO_BE_REPLACED 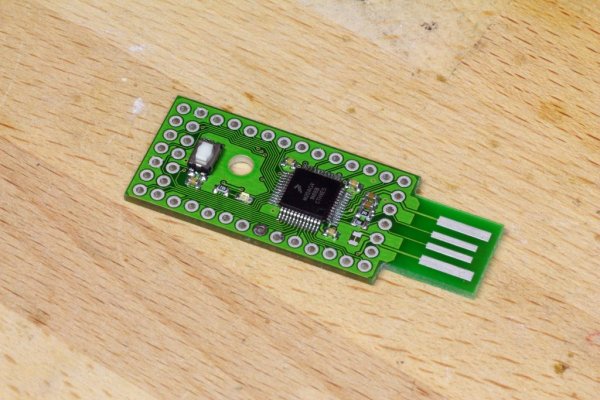 Most of you know that there are plenty of ARM powered development boards out there, so you may not be really sure what a new one can still bring to the table.

With a $5 price tag, the open hardware McHck (pronounced McHack) is meant for quickly building projects on a small budget. The board created by [Simon] is based on a Freescale Cortex M4 microcontroller, and can be plugged directly into one’s computer. As a Direct Firmware Update (DFU) bootloader is present on the microcontroller, there is no need for external programming equipment.

The board has unpopulated footprints that allow users to add other functionalities that may be required for their future projects: a Real Time Clock (RTC), a Boost regulator for single cell battery operation, Buck and linear regulators, a Lithium Polymer (LiPo) battery charger and even an External Flash storage.

The Bill of Materials can be found on the project wiki and the McHck community will soon launch a crowdfunding campaign to send the 5th version of the board to all the hobbyists that may be interested.

And if you’re curious, you can also have a look at all the other boards that Hackaday featured these last months: the browser based IDE arm board, quad-core ARM dev board and the Matchbox ARM. END_OF_DOCUMENT_TOKEN_TO_BE_REPLACED

The new crop of ARM Cortex M0/M3/M4 microcontrollers have a lot of interesting features for developers. In addition to supporting drag and drop programming via USB, the same hardware can also be used as a debugger. Setting breakpoints and inspecting memory at any point in the code is a wonderful feature, but not all the new ARM dev boards we’ve seen support this feature.

The folks over on SimpleCortex have a solution to this problem, but they need your help. To get their CMSIS-DAP hardware working with Open Source tools, they’re looking for a few good programmers and hardware developers to build a toolchain.

Right now, the hardware only works with Keil development tools. A closed source development environment is no good to anyone, so if you have some experience writing drivers and such, send the guys at SimpleCortex an email. They’ll give you a free board in return for a contribution to building an open source ARM toolchain.

Common sense requires us to mention that you should probably only send these guys an email if you actually plan on working on this problem. Still, it’s a great opportunity to contribute to open hardware. Throw down your mad skills and you might win some cash while you’re at it. [Zeta] tipped us off that Freescale just announced a new challenge. They call it the Make It Challenge and it centers around their 32-bit Kinetis microcontrollers. These are ARM Cortex-M4 chips and if you’re selected to compete they’ll offer their development hardware at a discount for you to get started.

You’ll need to jump through a few hoops. To be considered as a contestant you’ll need to preregister, cruise through some online training, and complete a quiz. From there, just come up with an idea and submit a design paper as the first round of competition. Ten finalists will rise from the group and take their design through to completion for judging in the fall. The top three will get some serious cash ($11,000 for first place) and be treated to an expense paid trip to Austin, Texas.