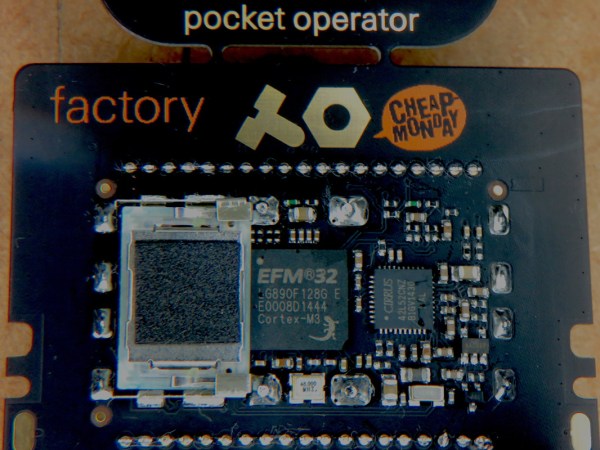 The number of easily usable and programmable microcontrollers is small, so when selecting one for a project there are only a handful of very popular, well documented chips that most of us reach for. The same can be said for most small companies selling electronics as well, so if you reach for a consumer device that is powered by a microcontroller it’s likely to have one of these few in it. As a result, a lot of these off-the-shelf devices are easy to hack, reprogram, or otherwise improve, such as the Robot Pocket Operator.

The Pocket Operator is a handheld, fully-featured synthesizer complete with internal speaker. It runs on a Cortex M3, a very popular ARM processor which has been widely used for many different applications, and features everything you would need for a synthesizer in one tiny package, including a built-in speaker. It also supports a robust 24-bit DAC/ADC and all the knobs and buttons you would need. And now, thanks to [Frank Buss] there is a detailed teardown on exactly how this device operates.

Some of the highlights from the teardown include detailed drawings of how the display operates, all of the commands for controlling the device, and even an interesting note about how the system clock operates even when the device has been powered off for a substantial amount of time. For a pocket synthesizer this has a lot to offer, even if you plan on using it as something else entirely thanks to the versatility of the Cortex M3.

END_OF_DOCUMENT_TOKEN_TO_BE_REPLACED

Even a cursory glance through a site such as this one will show you how many microcontroller boards there are on the market these days. It seems that every possible market segment has been covered, and then some, so why on earth would anyone want to bring another product into this crowded environment?

This is a question you might wish to ask of the team behind Explore M3, a new ARM Cortex M3 development board. It’s based around an LPC1768 ARM Cortex M3 with 64k of RAM and 512k of Flash running at 100MHz, and with the usual huge array of GPIOs and built-in peripherals.

The board’s designers originally aimed for it to be able to be used either as a bare-metal ARM or with the Arduino and Mbed tools. In the event the response to their enquiries with Mbed led them to abandon that support. They point to their comprehensive set of tutorials as what sets their board apart from its competition, and in turn they deny trying to produce merely another Arduino or Mbed. Their chosen physical format is a compact dual-in-line board for easy breadboarding, not unlike the Arduino Micro or the Teensy.

If you read the logs for the project, you’ll find a couple of videos explaining the project and taking you through a tutorial. They are however a little long to embed in a Hackaday piece, so we’ll leave you to head on over if you are interested.

We’ve covered a lot of microcontroller dev boards here in our time. If you want to see how far we’ve come over the years, take a look at our round up, and its second part, from back in 2011.

The higher-power ARM micros have a bunch of debugging tools for program and data tracing, as you would expect. This feature – CoreSight Trace Macrocells – is also found in the lowly ARM Cortex M3 microcontroller. The Cortex M3 is finding its way into a lot of projects, and [Petteri] wondered why these debugging tools weren’t seen often enough. Was it a question of a lack of tools, or a lack of documentation? It doesn’t really matter now, as he figured out how to do it with a cheap logic analyzer and some decoders for the trace signals.

There are two trace blocks in most of the Cortex M3 chips: the ITM and ETM. The Instrumentation Trace Macrocell is the higher level of the two, tracing watchpoints, and interrupts. The Embedded Trace Macrocell shows every single instruction executed in the CPU.  Both of these can be read with a cheap FX2-based logic analyzer that can be found through the usual outlets for about $10. The problem then becomes software, for which [Petteri] wrote a few decoders.

To demonstrate the debugging capability, [Petteri] tracked down a bug in his CNC controller of choice, the Smoothieboard. Every once in a great while, the machine would miss a step. With the help of the trace tool and by underclocking the micro, [Petteri] found the bug in the form of a rounding error of the extruder. Now that he knows what the bug is, he can figure out a way to fix it. He hasn’t figured that out yet. Still, knowing what to fix is invaluable and something that couldn’t be found with the normal set of tools. 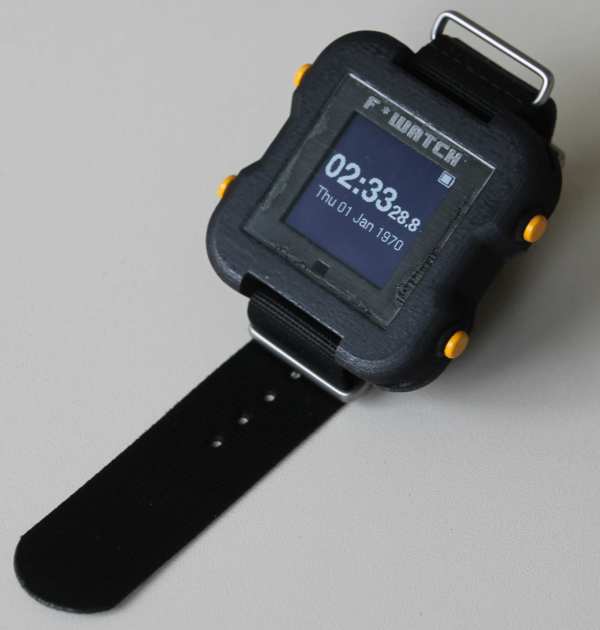 As one of their colleagues was retiring, several CERN engineers got together after hours during 4 months to develop his gift: a fully open electronic watch. It is called the F*Watch and is packed with sensors: GPS, barometer, compass, accelerometer and light sensor. The microcontroller used is a 32-bit ARM Cortex-M3 SiLabs Giant Gecko which contains 128KB of RAM and 1MB of Flash. In the above picture you’ll notice a 1.28″ 128×128 pixels Sharp Memory LCD but the main board also contains a micro-USB connector for battery charging and connectivity, a micro-SD card slot, a buzzer and a vibration motor.

The watch is powered by a 500mA LiPo battery. All the tools that were used to build it are open source (FreeCAD, KiCad, GCC, openOCD, GDB) and our readers may make one by downloading all the source files located in their repository. After the break is embedded a video showing their adventure.

END_OF_DOCUMENT_TOKEN_TO_BE_REPLACED

It’s still relitavely early in the year, and all those silicon manufacturers are coming out with new toys to satiate the engineer and hobbyist for years to come. NXP’s offering is the LPC1500, a series of ARM microcontrollers optimized for motor and motion-control applications.

The specs for the new chips include an ARM Cortex-M3 running at 72MHz, up to 256kB Flash, 36kB SRAM, USB, CAN, 28 PWM outputs, an a real-time clock. There are options for controlling brushless, permanent magnet, or AC induction motors on the LPC1500, with dev boards for each type of motor. Each chip has support for two Despite NXP’s amazing commitment to DIP-packaged ARM chips, the LPC1500 chips are only available in QFP packages with 48, 64, and 100 pins.

Don’t think the LPC1500 would be a perfect chip for a CNC controller – the chips only support control of two motors. However, this would be a fantastic platform for building a few robots, an electric car, or a lot of the other really cool projects we see around here. Far removed from the legions of 3D printers featured at this year’s Maker Faire in New York was a much smaller, but far more impressive announcement: The ARM-powered Arduino DUE is going to be released later this month.

Instead of the 8-bit AVR microcontrollers usually found in Arduinos, the DUE is powered by an ATSAM3X8E microcontroller, itself based on the ARM Cortex-M3 platform. There are a few very neat features in the DUE, namely a USB On The Go port to allow makers and tinkerers to connect keyboards, mice, smartphones (hey, someone should port IOIO firmware to this thing), and maybe even standard desktop inkjet or laser printers.

The board looks strikingly similar to the already common Arduino Mega. That’s no mistake; the DUE is compatible with existing shields, so connecting a RAMPS board for your 3D printer should be a snap.

Here’s a PDF the Arduino and Atmel guys were handing out at their booth. A few DUE boards have already made it into the hands of important people in the Arduino community, including 3D printer guru [Josef Prusa]. Sadly, the folks at Arduino didn’t think media personalities needed a DUE before its release, so you’ll have to wait until we get our hands on one later this month for a review.