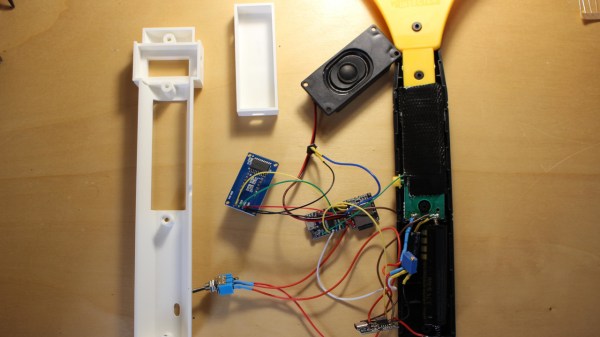 Not many creatures are as universally despised as mosquitoes, whether it’s the harmless kind that, at worst, makes you miss winter, or the more serious ones that can be a real threat to your health. A satisfying way to deal with them is to send them off with a bang using one of those racket-shaped high voltage metal mesh bug zappers. [lmu34] saw big potential for some additional gamification here, and decided to equip his zapper with a kill counter and matching sound effects.

The initial thought was that there has to be a way to detect when a mosquito hits the mesh, and use that to trigger further events — in [lmu34]’s case play a sound file and increment a counter. After taking the zapper apart and doing a bit of research, he put theory into practice using a Digispark Pro board containing an ATtiny167, the DFPlayer module for playing a set of WAV files, and an ambitious four digit 7-segment display to keep track of the “score”. A new 3d-printed cover provided enough space to house all the components, including a charging circuit as he swapped the original two AAA batteries with a rechargeable one, which gave a bit more power for the display.

Of course, with these operation voltages, it would be difficult to detect activity on the high voltage side more than once, so [lmu34] went with current sensing instead. He distinguishes between two different levels here and maps them as normal kill and monster kill for the big zaps respectively, playing different sounds for each. Have a look at the video after the break for some quick demonstration.

All in all, this is a delightfully absurd modification that almost screams for an ESP32 to enable multiplayer mode as next iteration. But if chasing mosquitoes with low-tech gadgets isn’t for you, there’s always lasers and good old torture, although those can’t be repurposed to do some hardware fault injections during the winter months then.

END_OF_DOCUMENT_TOKEN_TO_BE_REPLACED 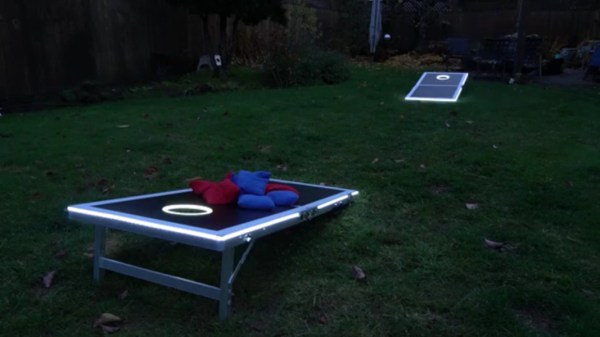 How do you instantly make any game better? By lighting it up and playing at night. We would normally say ‘drinking’, but we’re pretty sure that drinking is already a prerequisite for cornhole — that’s the game where you toss bean bags at holes in angled boards.

[Hardware Unknown] loves cornhole, and was gifted a set of portable, folding boards that light up around the ring for nighttime action. These turned out to be the perfect basis for reactive boards that light up and play sound whenever points are scored. Both boards have a vibration sensor to detect bags hitting the top, and an IR break-beam sensor pair across the hole. An Arduino Nano reads from the sensors and controls an amplifier and a DF Player for sound.

Players get a point and a song for landing a bag on top of the board, and three points and a different song for making it in the hole. We love the Easter egg — anyone who manages to trip both the vibration sensor and the break-beam detector at the same time will be treated to the sound of a flock of honking geese. Check out the build journey after the break.

No good at cornhole? This one doesn’t let you miss.

END_OF_DOCUMENT_TOKEN_TO_BE_REPLACED 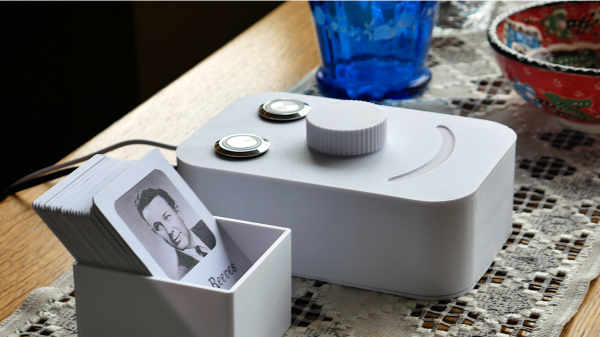 [ananords] and his girlfriend wanted to make a simple and easy to use music player for her grandmother. Music players like CD players and MP3s have gotten just a bit too difficult to handle, so they wanted to find a much simpler solution.

They conceived the idea of creating a little jukebox called Juuk, with a simple and easy to use interface. They created individual RFID cards with the artist’s photo on the front face, making it easy to select different options from the music library. Juuk has a built-in RFID reader that will recognize each RFID card and play the appropriate musical number from an SD card.

This simple interface is much more user-friendly than those awful touchscreen devices that we’re all forced to fiddle with today and also has a cool retro appeal that many of our readers are sure to appreciate. Juuk also has a pretty ergonomic interface with a big, easy-to-use knob for controlling the volume and two appropriately illuminated buttons, one green and one red, for simple stop and play options.

We love when our hacks are able to blend form with function and emphasize high usability. Check out some of our other assistive tech on the blog.

END_OF_DOCUMENT_TOKEN_TO_BE_REPLACED

Microwaves used to be simple to use. Set the dial for the desired time, and hit start. Then, everything went digital and the average microwave now takes between four and six button presses in precise order just to start heating. Music players have gone down a similar path, and those that grew up in the era of vinyl records can find modern digital media simply too hard to work with. To solve this problem, [ananords] whipped up Juuke, a music player focused on ease of use.

The Juuke has a simplistic interface intended to be as easy to use as possible. Songs are selected using printed cards with embedded RFID tags – placing them on the Juuke triggers playback. Volume is controlled with a simple knob, and the only two buttons are for play/pause and shuffle mode.

Underneath, an Arduino Uno runs the show, hooked up to a RC522 RFID interface board. Music is handled by the DFPlayer mini, which loads tracks off a microSD card. The DFPlayer can be hooked up to a speaker directly, but there’s also a 3.5mm jack output if the device is to be used with an external amplifier.

It’s a tidy project, and one that actually looks pretty fun to use. Obviously, there’s some time investment required to prepare the SD card and produce the RFID cards, but the final product could be fun to use at a party, too. We’ve seen similar builds before, as well. Video after the break.

END_OF_DOCUMENT_TOKEN_TO_BE_REPLACED

We’re always searching for the coolest biohacking projects all over the web, so imagine our excitement when we ran across [marcvila333’s] wearable biometric monitor on Instructables. This was a combined effort between [Marc Vila], [Guillermo Stauffacher], and [Pau Carcellé] as they were wrapping up the semester at their university. Their goal was to develop an integrated device that could modulate the wearer’s heart, and subsequently their mood and stress levels, using music.

Their device includes an LCD screen for user feedback, buttons for user input, an MP3 module, and a heart rate sensor module. The user can measure their heart rate and use the buttons to select the type of music they desire based on whether they would like to decrease or increase their heart rate. The science behind this phenomenon is still unknown, but the general sense is that different music can trigger different chemical signals in your brain, subsequently affecting your mood and other subtle physiological effects. I guess you can say that we tend to jive to the beat of our music.

It would be really cool to see their device automatically change the song to either lower or raise the user’s heart rate, making them calmer or more engaged. Maybe connect it to your tv? Currently, the user has to manually adjust the music, which might be a bit more inconvenient and could possibly lead to the placebo effect.

Either way; Cool project, team. Thanks for sharing! 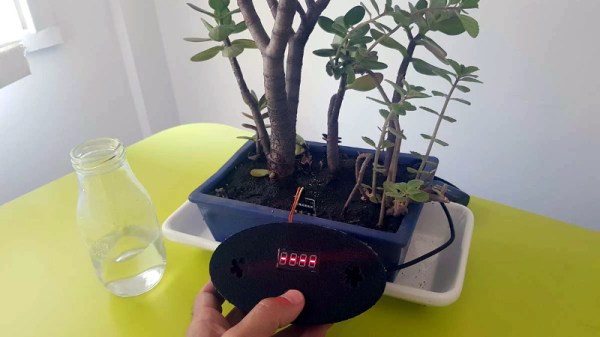 While best known for Charlie and the Chocolate Factory, Roald Dahl wrote quite a few similarly oddball stories in his time. One of them, The Sound Machine, is about a device that allowed the user to hear the anguished screams of trees as they were cut down. Sounds kind of weird to us, but [Roni Bandini] liked the idea so much he decided to build his own version.

Now to be fair, the device doesn’t only scream in pain. In fact, most of the time it should be emitting laughs and happy noises. Using a moisture sensor driven into the soil of a plant’s pot, the device uses these audio cues to tell you the relative health of your leafy friend. So assuming you’ve got any sort of green thumb at all, things should be fine.

But once the soil gets too dry and the device determines the plant is in “pain”, things take a turn for the worse. We suppose it doesn’t technically scream out so much as grunt like a zombie, but it’s still not a noise we’d want to hear while walking through the house at night. Luckily, it seems you need to hit the button on the front of the 3D printed enclosure to get it to play the appropriate sound track from its DFPlayer module.

Personally we’d rather build something that makes sure the plants are being taken care of automatically than a gadget that cries out in anguish to remind us that we don’t know what we’re doing. But hey, everyone gets inspired in their own way.

END_OF_DOCUMENT_TOKEN_TO_BE_REPLACED 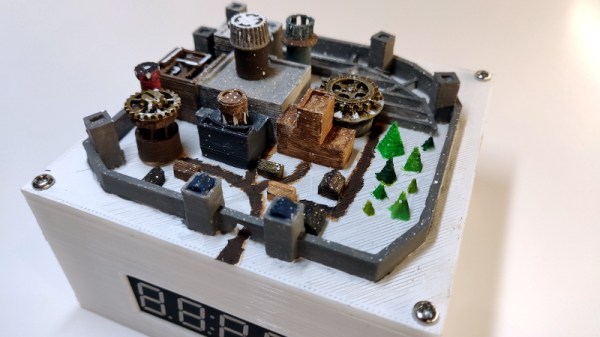 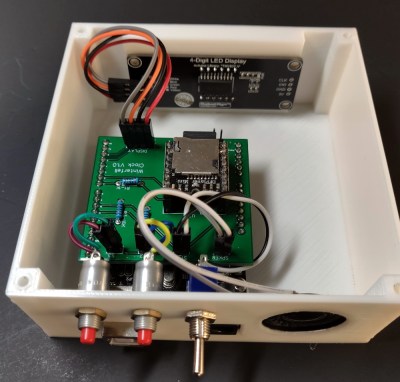