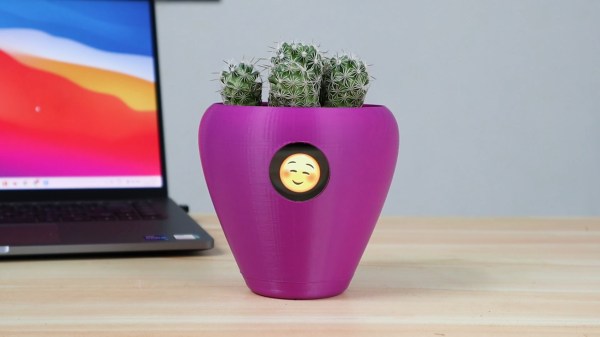 On the surface, most plants really aren’t all that exciting, save for maybe the Venus flytrap. Sure, you can watch them grow in the long run, but for the most part, they’re just kind of there, quietly bringing peace and cleaner air. Day by day, they hardly move at all, although if you’re one of those people who likes to get the Sim into the pool and take the ladder away, you could always play the drought game just to watch it droop and come back to life a half hour later.

Fytó the smart planter is a much more cool and far less cruel way of spicing up your plant life. The idea is to turn a plant into a pet by giving it an expressive face. Sure, plants have needs, but they communicate them more subtly than the average Earthing. By assigning animated emoji to various conditions, the plant becomes more familiar and in turn, feels more like a pet. Plus, the whole thing is just so darn cute.

Fytó runs on a Raspberry Pi 2W and has six emotions that are based on a capacitive soil moisture sensor, an LM35 temperature sensor, and an LDR module to detect light levels. If everything is copacetic, Fytó puts on a happy face, and will lick its lips after getting a drink of water. If the light is insufficient, Fytó looks sleepy; if the plant needs water, Fytó appears sweaty, red-faced, and parched. Don’t conflate this with the temperature-taking emoji, which indicates that Fytó is too hot. Finally, if the spot is too drafty and cold, Fytó looks like it’s nearly frozen. Be sure to check out the video after the break and watch Fytó work through their range of emotions.

Would you rather hear your plant complain in English? There’s a build for that.

END_OF_DOCUMENT_TOKEN_TO_BE_REPLACED 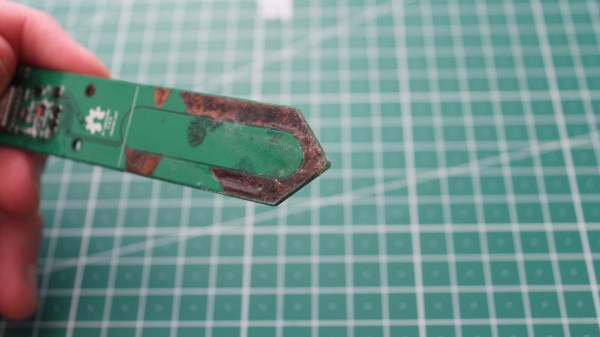 Ever wanted to measure soil moisture? Common “soil moisture meter module arduino raspberry compatible free shipping” PCBs might deceive you with their ascetic looks. Today, [Raphael (@rbaron_)] is here to teach us (Twitter, unrolled) what it takes to build a soil-embedded sensor that can actually survive contact with a plant.

As the picture might hint, waterproofing is of paramount importance, and soldermask doesn’t quite cut it. Raphael describes his journey of figuring out approaches and coatings that would last, starting from simply using nail polish, and ending with the current option – a rotisserie-like device that rotates sensors as the coating applied to them dries, mitigating a certain kind of structural failure observed long-term. With plenty of illustrative pictures and even a video of the rotisserie device in action, you’ll quickly learn things that took time and effort for Raphael to figure out.

This isn’t the first time Raphael shares some design battlefield stories and lessons with us – he has taught us about overall capacitive moisture sensor principles, too! If that interests you, we’ve covered quite a few moisture sensor designs, from cheap but hardy two-nails designs to flip-dot-equipped ones, and some of us take the commercial designs and upgrade them!

END_OF_DOCUMENT_TOKEN_TO_BE_REPLACED 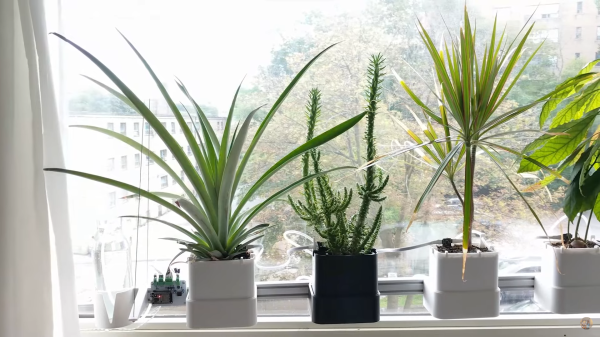 The greatest threat to a potted plant stems from its owner’s forgetfulness, but [Sasa Karanovic] has created an automation system that will keep his plants from getting too thirsty. Over the past year [Sasa] has been documenting an elegant system for monitoring and watering plants which has now blossomed into a fully automated solution.

If you haven’t seen the earlier stages of the project, they’re definitely worth checking out. The short version is that [Sasa] has developed a watering system that uses I2C to communicate with soil moisture, temperature, and light sensors as well as to control solenoids that allow for individual plants to be watered as needed. An ESP32 serves as a bridge, allowing for the sensors to be read and the water to be dispensed via an HTTP interface.

In this final part, [Sasa] integrates his watering system into a home automation system. He uses a MySQL database to store logs of sensor data and watering activity, and n8n to automate measurement and watering. If something isn’t quite right, the system will even send him a Telegram notification that something is amiss.

If you think automation might be the best way to save your plants from a slow death, [Sasa] has kindly shared his excellent work on GitHub. Even if you don’t have a green thumb, this is still a great example of how to develop a home automation solution from scratch. If you’re more interested in television than gardening, check out [Sasa]’s approach to replacing a remote control with a web interface!

END_OF_DOCUMENT_TOKEN_TO_BE_REPLACED 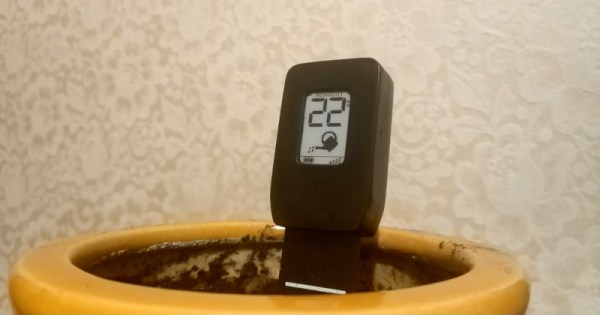 Keeping soil moist is key to keeping most plants happy. It can be a pain having to dip one’s fingers into dirty soil on the regular, so it’s desirable to have a tool to do the job instead. [Andrew Lamchenko] built a capable soil moisture monitor, and equipped it with an E-ink display for easy readings at a glance.

The device is built around the NRF52810 or other related NRF52 microcontrollers, which run the show. Rather than using an off-the-shelf sensor to determine soil conditions, an LMC555CMX timer chip is used, a variant of the classic 555 timer designed for low power consumption. Combined with the right PCB design, this can act as a moisture sensor by detecting capacitance changes in the soil. The sensor is also able to send data using the MySensor protocol, allowing it to be used as a part of a home automation system.

The soil is tested periodically with the moisture sensor, and displayed on the attached e-ink screen. Since the e-ink display requires no electricity except when rewriting the display, this allows the sensor to operate for long periods without using a lot of battery power. The soil can be checked, the display updated, and then the entire system can be put to sleep, using tiny amounts of power until it’s time to test the soil again.

It’s a great example of design for low power applications, where component selection really is everything. We’ve featured [Andrew]’s projects before; he’s long been a fan of using e-ink displays to create long-lasting, low power budget sensor platforms. Video after the break.

END_OF_DOCUMENT_TOKEN_TO_BE_REPLACED 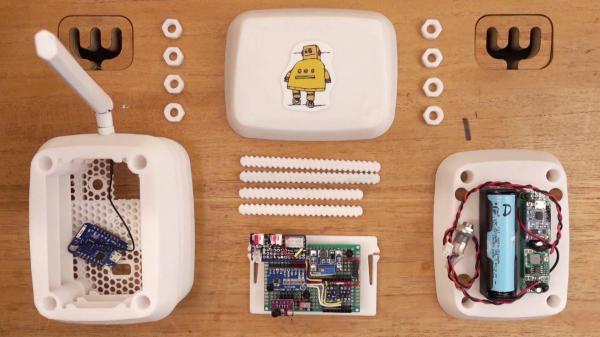 It’s not infrequent that we see the combination of moisture sensors and water pumps to automate plant maintenance. Each one has a unique take on the idea, though, and solves problems in ways that could be useful for other applications as well. [Emiliano Valencia] approached the project with a few notable technologies worth gleaning, and did a nice writeup of his “Autonomous Solar Powered Irrigation Monitoring Station” (named Steve Waters as less of a mouthful).

Of particular interest was [Emiliano]’s solution for 3D printing a threaded rod; lay it flat and shave off the top and bottom. You didn’t need the whole thread anyway, did you? Despite the relatively limited number of GPIO pins on the ESP8266, the station has three analog sensors via an ADS1115 ADC to I2C, a BME280 for temperature, pressure, and humidity (also on the I2C bus), and two MOSFETs for controlling valves. For power, a solar cell on top of the enclosure charges an 18650 cell. Communication over wireless goes to Thingspeak, where a nice dashboard displays everything you could want. The whole idea of the Stevenson Screen is clever as well, and while this one is 3D printed, it seems any kind of stacking container could be modified to serve the same purpose and achieve any size by stacking more units. We’re skeptical about bugs getting in the electronics, though.

We recently saw an ESP32-based capacitive moisture sensor on a single PCB sending via MQTT, and we’ve seen [Emiliano] produce other high quality content etching PCBs with a vinyl cutter. 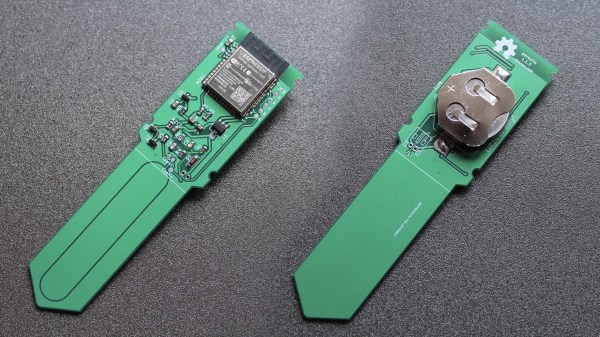 We have all been stuck inside for too long, and maybe that’s why we have recently seen a number of projects attempting to help humans take better care of their housemates from Kingdom Plantae. To survive, plants need nutrients, light, and water. That last one seems tricky to get right; not too dry and not drowning them either, so [rbaron’s] green solder-masked w-parasite wireless soil monitor turns this responsibility over to your existing home automation system. 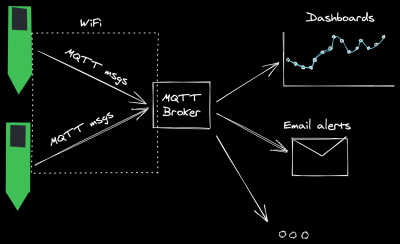 Like this low-power soil sensor project and the custom controller for six soil sensors, [rbaron’s] w-parasite uses a “parasitic capacitive” moisture sensor to determine if it’s time to water plants. This means that unlike resistive soil moisture sensors, here the copper traces are protected from corrosion by the solder mask. For those wondering how they work, [rbaron]’s Twitter thread has a great explanation.

The “w” in the name is for WiFi as the built-in ESP-32 module then takes the moisture reading and sends an update wirelessly via MQTT. Depending on the IQ of your smart-home setup, you could log the data, route an alert to a cellphone, light up a smart-bulb, or even switch on an irrigation system. 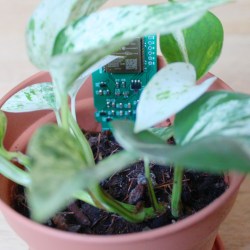 [rbaron] has shared a string of wireless hacks, controlling the A/C over Slack and a BLE Fitness Tracker that inspired more soldering than jogging. We like how streamlined this solution is, with the sensor, ESP-32 module, and battery all in a compact single board design. Are you asking yourself, “but how is a power-hungry ESP-32 going to last longer than it takes for my geraniums to dry out?” [rbaron] is using deep sleep that only consumes 15uA between very quick 500ms check-ins. The rechargeable LIR2450 Li-Ion coin cell shown here can transmit a reading every half hour for 90 days. If you need something that lasts longer than that, use [rbaron]’s handy spreadsheet to choose larger batteries that last a whole year. Though, let’s hope we don’t have to spend another whole year inside with our plant friends.

We may never know why the weeds in the cracks of city streets do better than our houseplants, but hopefully, we can keep our green roommates alive (slightly longer) with a little digital nudge. 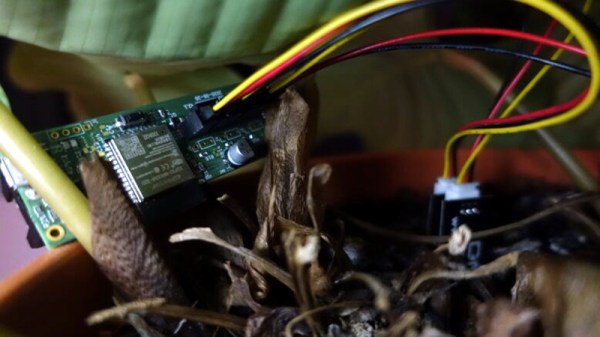 Soil moisture sensors are cheap and easy to interface with, to the point that combining one with an Arduino and blinking an LED when your potted plant is feeling a bit parched is a common beginners project. But what about on the long term? Outside of a simple proof of concept, what would it take to actually read the data from these sensors over the course of weeks or months?

That’s precisely the question [derflob] recently had to answer. The goal was to build a device that could poll multiple soil sensors and push the data wirelessly into Home Assistant. But since it would be outside on the balcony, it needed to run exclusively on battery power. Luckily his chosen platform, the ESP32, has some phenomenal power saving features. You just need to know how to use them. END_OF_DOCUMENT_TOKEN_TO_BE_REPLACED