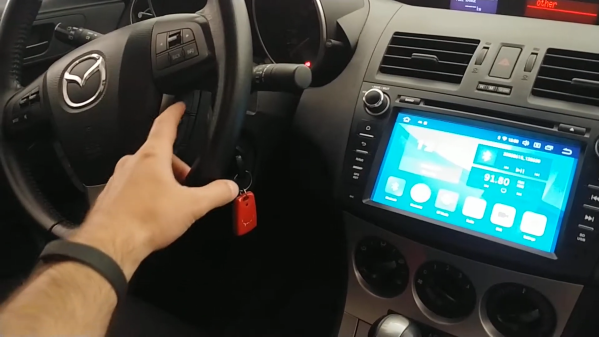 [Arik Yavilevich] recently upgraded his second-gen Mazda’s control console, going from the stock busy box to an Android head unit that does it all on a nice big touchscreen. It can also take input from the handy steering wheel buttons — these are a great option for keeping your eyes on the road and occasionally startling your unsuspecting passengers when the radio station suddenly changes. 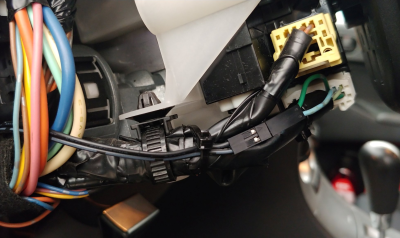 The only problem is that [Arik]’s stock steering wheel doesn’t have any media-specific buttons on it. After a short trip to the junkyard, [Arik] had a fancier wheel to go along with the new head unit.

[Arik] doesn’t use cruise control, and those particular buttons can’t be hooked up with reprogramming the car’s computer, so he made them into macro buttons that control the head unit over Bluetooth, using an STM32 black pill board stashed in the glove box.

[Arik] found out that the cruise control buttons don’t ride the CAN bus — they use a resistor ladder/voltage divider and go directly into the ECU. After that it was mostly a matter of finding the right wires and then cutting and re-routing them to make the buttons work on the ACC setting as well as ON. A brief demo video is idling after the break.

Have an old smart phone lying around? Of course you do. Why not make your own head unit?

END_OF_DOCUMENT_TOKEN_TO_BE_REPLACED 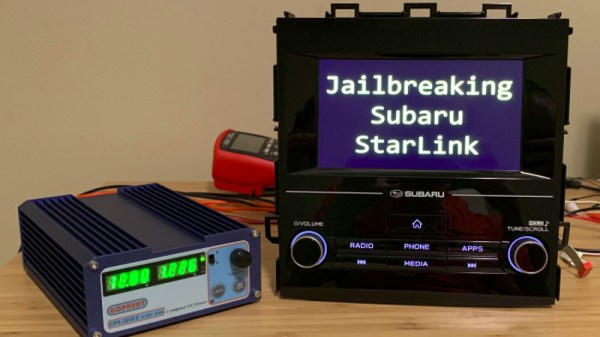 A modern car still drives in the same way as the one you would have bought thirty years ago, it still has a steering wheel and all the other controls. What has changed in the cabin lies mostly beneath the dash, where enough computing power to launch several Moon shots takes care of everything from air-conditioning to entertainment. As you might expect these systems attract the curiosity of security researchers, and through their work we gain an insight into their operation.

[Scott Gayou] has a Subaru, a car that has an all-in-one entertainment system head unit that is typical of what you’d find across a host of manufacturers. His account of jailbreaking it is a lengthy essay and a fascinating read for anyone. He starts with a serial port, then an SSH prompt for a root password, and a bit of searching to find it was made by Harman and that it runs the closed-source realtime OS QNX. From there he finds an official Subaru update, from which he can slowly peel away the layers and deduce the security mechanism. The write-up lays bare his techniques, for example at one point isolating the ARM assembler for a particular function and transplanting it bodily into his own code for investigation.

Eventually he could penetrate the filesystem of the update, and from there he could find that while the root user had a password there were two other accounts that while heavily locked down, had none. The discovery came that files on USB drives plugged into the system were given user-level execute permissions, at which point under the locked-down user he could execute arbitrary code from USB drives. He could then create and modify copies of the device’s filesystem which he could flash onto it, and thus place a modified password validation function into it and gain root access.

Some Hackaday readers will be accomplished in security work such as this, but many of us are hardware specialists for whom it remains something of a dark art. A comprehensive and accessible write-up such as this one is therefore invaluable, because it gives us an insight into the techniques used and perhaps more importantly, into some of the security pitfalls a hardware engineer might unwittingly introduce into their creations.

QNX is a real-time operating system with a long history of appearances in industrial and automotive applications. Readers with long memories may recall their demo floppies from the 1990s which packed a fully functional GUI, Internet connectivity, and modern (for the time) web browser onto a single 1.44Mb floppy disk. We’ve talked about it in the past in a little detail, as when someone made a desktop OS using it. 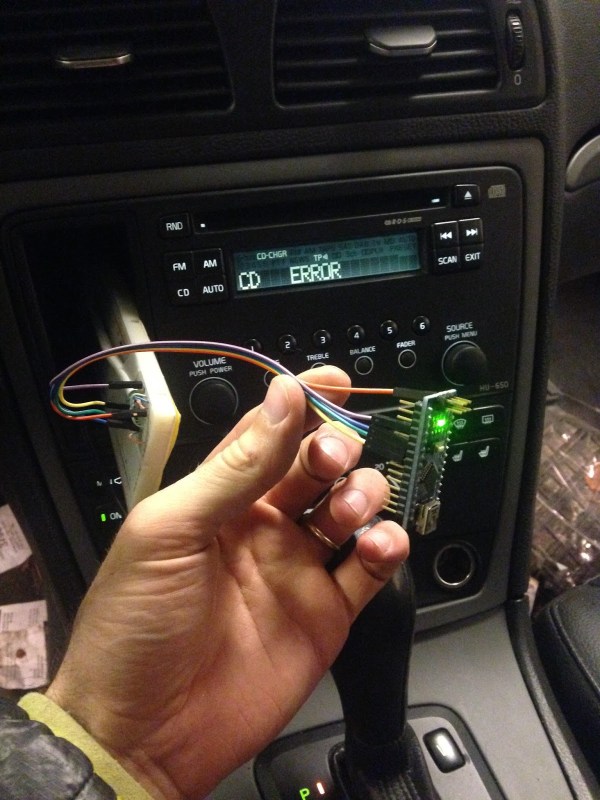 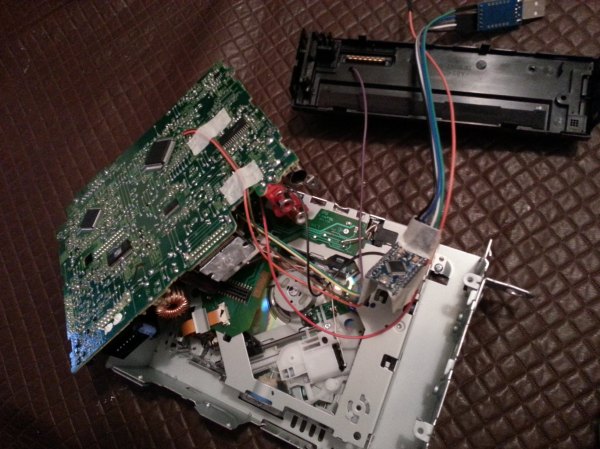 There is no question that steering wheel mounted controls are super convenient. Reaching all the way over to the dashboard to change a radio station is so 1990’s. An ever-increasing percentage of new cars are coming equipped with steering wheel controls for the stereo, however, you’ll lose the button control if you change out the stock head unit to something a little higher in quality. Sure, there may be an adapter readily available for your car/stereo combination, but there also may not be. [Ronnied] took the DIY road and made his own adapter.

The first obstacle for [Ronnied] was to figure out the wiring on the steering wheel controls. After some poking around he found that there were only two wires used for all of the control buttons, each button only changing the resistance between the two wires. The button states could easily be read by using an Arduino’s analog input. A Pro Mini model was chosen for its small size as it could be housed in the radio compartment of the dash.

The next step was getting the Arduino to control the aftermarket head unit. [Ronnied] did some research regarding JVC’s Stalk digital control interface but came to the conclusion that it would be easier to direct wiring the Arduino outputs to the appropriate spot on the head unit’s circuit board. To do this the button for each function that would also be represented on the steering wheel was traced out to find a common point on the circuit board. Jumper wires soldered to the circuit board simply allow the Arduino to emulate button pushes. To ensure that the head unit buttons still work in conjunction with the steering wheel buttons, the Arduino would have to keep the pins as inputs until a steering wheel button was pushed, the pin changed to an output, the signal sent and the pin changed back to an input. This feature was easily created in the Arduino sketch.

END_OF_DOCUMENT_TOKEN_TO_BE_REPLACED We love seeing repairs and always marvel at the ability to track down the problem. [Todd] seems to have a knack for this. He was met with a lot of adversity when trying to get the Vacuum Fluorescent Display working on his car stereo. A lot of persistence, and a little bit of taking the easier way out let him accomplish his goal.

The head unit is out of his 1994 Jeep. He knew the radio functionality still worked, but the display was completely dark. After getting it out of the dashboard he connected it to a bench supply and started probing around. He established that the data lines were still working by setting the radio to auto scan mode and testing with a multimeter. When he went to measure the cathode pins he didn’t get any reading. It seems the driver which supplies that signal is burnt out.

One easy fix would be to replace the parts from a scavenged unit. [Todd] hit the junkyard and picked up one from a Jeep that was just one model year apart from his. Alas, they weren’t exactly the same, and although he swapped out a chip (using a neat heated solder sucker) it didn’t work. In the end he simply dropped in a power resistor to use the 12V rail as a 1V at 0.1A source for the filament.

You can see his repair extravaganza in the video after the break. If you’re looking for tips on scavenging these types of displays check out this post.

END_OF_DOCUMENT_TOKEN_TO_BE_REPLACED 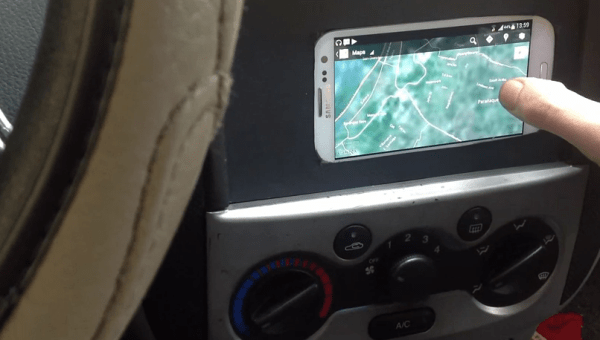 Here’s how you can have a hands-free, no worries about the battery, Android experience while you drive. [Steve] removed the head unit from his car and replaced it with a Samsung Galaxy SIII Android phone. The look is pretty nice, but we do have a few suggested improvements if you try this one for yourself.

It started simply by removing the factory stereo which left a double-height opening in the dashboard. [Steve] cut a piece of wood to fit the gaping hole, painting it a grey that would compliment the interior colors of the car. The phone is mounted on this plate, with plenty of room for the USB and audio cables. From there it is finished up with another wooden plate which has a cutout for the touch screen. See the final project, as well as glimpses of the installation, in the video after the break.

[Steve] demonstrates using the GPS features and playing music. We’d improve this in a couple of ways. First off, using something like the IOIO board you could add a physical volume knob, which we’re not interested in giving up for a touch screen quite yet. If you were willing to go the extra mile, a CAN-BUS chip could be added too that would monitor button presses from the steering wheel music controls.

END_OF_DOCUMENT_TOKEN_TO_BE_REPLACED