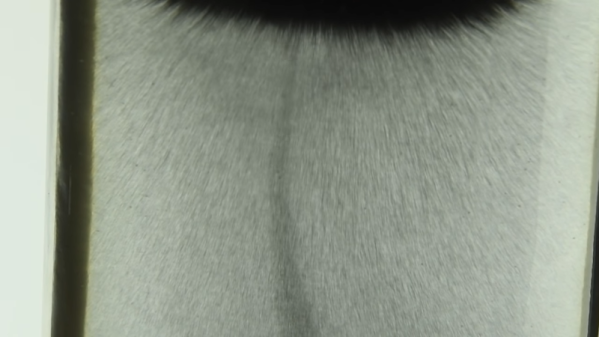 You’ve probably heard the term magnetic gradient before, but have you ever seen one? Now you can in [supermagnetman’s] video, below. The key is to use very fine (2 micron) iron filings and special silicone oil. The video is a good mix of whiteboard lectures and practical hands-on experimenting. Just watching him spin the iron filings in the bottle was entertaining. There’s sources in the video description for the oil and the filings if you want to replicate the demonstrations for a classroom or just for your own enjoyment.

It’s one thing to know the math behind magnetic fields. It’s another to be able to use them in practical applications. But a good understanding of the physical manifestation of the magnetic field coupled can help clarify the math and vice versa. There’s a lot of common sense explanations too. For example, the way the filings accelerate as they get closer to the magnet explains why the patterns form the way they do. Iron filings are a traditional way to “see” magnetic fields. Ask anyone who ever had a Wooly Willy.

Iron filings can be fun to play with, although we don’t think we’ve ever had any this fine. If you prefer your magnetic field visualizations to be higher-tech, we have the answer.

END_OF_DOCUMENT_TOKEN_TO_BE_REPLACED

Up on the second level of World Maker Faire’s main hall, one could hear Technotronic’s hit “Pump up the Jam” playing again and again. We were expecting breakdancing robots, but upon investigating, what we found was something even better. [David Durlach] was showing off his Choreographed Iron Dust, a 9 x 9 grid of magnets covered in iron filings. The filings swayed and danced to the beat of the music, at times appearing more like ferrofluid than a dry material. Two LED lights shined on the filings from an oblique angle. This added even more drama to the effect as the light played on the dancing spikes and ridges.

While chatting with [David] he told us that this wasn’t a new hack. Choreographed Iron Dust made its debut at the Boston Museum of Science back in 1989. Suddenly the 80’s music made more sense! The dust’s basic control system hasn’t changed very much since the 1980’s. The magnets are actually a stack of permanent and electromagnets. The permanent magnet provides enough force to hold the filings in place. The electromagnets are switched on to make the filings actually dance.

Since it was designed in 1989, there were no Arduinos available. This project is powered by the most hacker friendly interface of the era: the PC’s parallel port. As one might imagine, [David] has been having a hard time finding PC’s equipped with parallel ports these last few years.

[David] wasn’t just showing off iron dust. Having spent so much time painstakingly animating the iron filings for various customers, he knew there had to be a better way. He’s come up with ChoreoV, a system which can take recorded video, live performances, or even capture a section of a user’s screen. The captured data can then be translated directly into light or motion on an art piece.