T-slot extrusions used to be somewhat mysterious, but today they are quite common thanks to their use in many 3D printers. However, it is one thing to assemble a kit with some extrusions and another thing to design your own creations with the material. If you ever had a Play-Doh Fun Factory as a kid, then you know about extrusions. You push some material out through a die to make a shape. Of course, aluminum extrusions aren’t made from modeling clay, but usually 6105-T5 aluminum. Oddly, there doesn’t seem to be an official standard, but it is so common that there’s usually not much variation between different vendors.

We use extrusions to create frames for 3D printers, laser cutters, and CNC machines. But you can use it anywhere you need a sturdy and versatile frame. There seems to be a lot of people using them, for example, to build custom fixtures inside vans. If you need a custom workbench, a light fixture, or even a picture frame, you can build anything you like using extrusions. END_OF_DOCUMENT_TOKEN_TO_BE_REPLACED 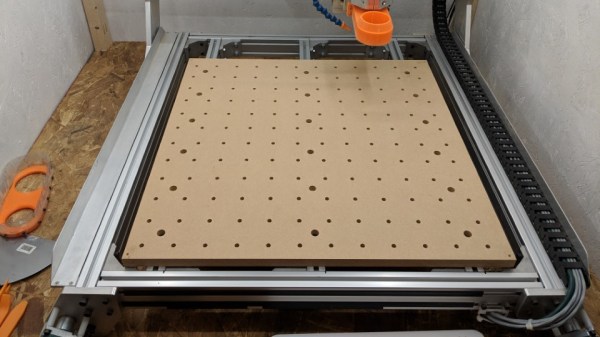 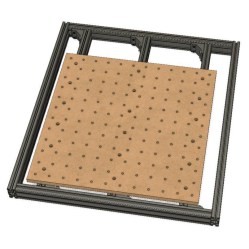 [Adam Haile] has been spending some time improving his CNC router and his latest change is a custom wasteboard with improved bed support. Not only does the MDF wasteboard have plenty of threaded inserts to make for easy clamping solutions, but [Adam] replaced the frame underneath the board with a new set of aluminum extrusions to provide better support. Originally, there was only support for the edges of the wasteboard, which allowed the middle to sag. While researching the machine’s specs, he was able to recognize and order the exact extrusions he needed from Misumi and construct an improved bed to go with the new board. Should you wish to make your own version, [Adam] provides all the part numbers and CAD files required.

Embedded below is a video showing the machine drilling the holes, followed by surfacing the entire board so that it is flat. Since the bolt heads are well below the surface of the board, and the threaded inserts for the holes are on the bottom, there’s no worry of the tool hitting anything it shouldn’t during this process.

END_OF_DOCUMENT_TOKEN_TO_BE_REPLACED

Most inexpensive 3D printers use a type of lead screw to move some part of the printer in the vertical direction. A motor turns a threaded rod and that causes a nut to go up or down. The printer part rides on the nut. This works well, but it is slower than other drive mechanisms (which is why you don’t often see them on the horizontal parts of a printer). Some cheap printers use common threaded rod, which is convenient, but prone to bad behavior since the rods are not always straight, the threads are subject to backlash, and the tolerances are not always the best.

More sophisticated printers use ACME threaded rod or trapezoidal threaded rods. These are made for this type of service and have thread designs that minimize things like backlash. They typically are made to more exacting standards, too. Making the nut softer than the rod (for example, brass or Delrin) is another common optimization.

However, when lead screws aren’t good enough, mechanical designers turn to ball screws. In principle, these are very similar to lead screws but instead of a nut, there is a race containing ball bearings that moves up and down the screw. The ball bearings lead to less friction.

Misumi recently posted a few blog articles about ball screws. Some of the information is basic, but it also covers preloading and friction. Plus they are promising future articles to expand on the topic. If you prefer to watch a video, you might enjoy the one below.

END_OF_DOCUMENT_TOKEN_TO_BE_REPLACED

Thinking about starting a CNC machine, 3D printer, or laser cutter project? Misumi has you covered. They’re offering up $150 worth of free stuff with a coupon code. [CharlieX] is putting together a BuildLog laser cutter, a whole bunch of people on reddit are building 3D printers, and I have most of the rods for an i3 build. Just use the promotion code First150 on your order. Actually, read the terms and conditions, but rest assured – this is legit.

A few months ago, we saw this Enigma cypher machine that combines the classic late-30s aesthetic of the original with modern hardware – including a few 16-segment displays. Now there’s a Kickstarter for the Open Source Enigma replica, and it looks like it’s going to end up being pretty popular. Here’s the site with all the deets. Check out that QWERTZ keyboard.

[Jason] has a love of LEGO and a terrible keyboard. Combine the two and he came up with a functional LEGO keyboard. The electronics are, sadly, an old PS/2 membrane keyboard, but the mechanicals are a work of art – all the keys are mounted on a grid of Technic parts that can be positioned over each of the membrane buttons.

Want a really cool look for your next enclosure? How about LED pipes? They’re those clear plastic bits that direct the light from LEDs around corners and can make any enclosure looks like a Star Trek set piece. You can cut these things with a laser cutter like the Alima team did with their indoor air quality meter. Looks pretty cool.