SD cards have long been a favorite with microcontroller hobbyists. Cheap, readily available, and easily interfaced, they remain a staple for small projects that need to store a lot of data. Now, they’re available in chip form! These are known as SD NAND parts that emulate the SD card interface itself.

[LadyAda] recently gave them a test-drive after spotting a tweet from [Greg Davill] (who we’re familiar with thanks to his excellent LED cubes). The devices are manufactured by XTX Technology and available from LCSC in a range of 1, 2, 4, and 8 GB sizes. [Ivan Grokhotkov] also illuminated a similar device from another maker in a reply to [Greg’s] original tweet, so there may be more sources out there.

These chips come in standard LGA8 surface mount package and can be easily soldered to a board, offering mechanical and manufacturing benefits versus using a normal SD or microSD card in a slot-type connector. Also, unlike other SMD flash memory parts, they handle all the file system details and wear levelling for you! With the inflation of SD card sizes, it’s also difficult to find these on the shelf in normal cards these days.

[Adafruit] plan to have a breakout for these parts out soon with a level shifter included for ease of use. We can imagine these chips finding their way into all manner of datalogger projects, since they can be ordered with other parts and permanently soldered into a design. If you’ve got a particularly good idea where these chips would prove useful, sound off in the comments. Video after the break.

END_OF_DOCUMENT_TOKEN_TO_BE_REPLACED 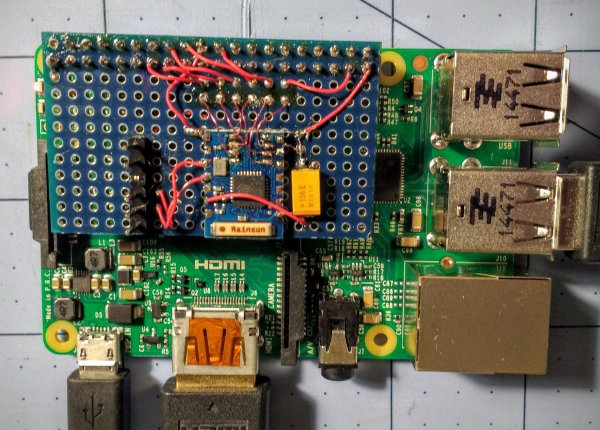 These are the times that we live in: the Raspberry Pi Zero comes out — a full freaking Linux computer on a chip for $5 — and people complain that it doesn’t have this or that. Top place on the list of desiderata is probably a tie between audio out and WiFi connectivity. USB is a solution for both of these, but with one USB port it’s going to be a scarce commodity, so any help is welcome.

Hackaday.io hacker [ajlitt] is looking for a way out of the WiFi bind. His solution? The Raspberry Pi series of chips has a special function on a bunch of the GPIO pins that make it easier to talk to SDIO devices. SDIO is an extension of the SPI-like protocol that’s used with SD memory cards. The idea with SDIO was that you could plug a GPS or something into your PDA’s SD card slot. We don’t have PDAs anymore, but the SDIO spec remains.

[ajlitt] dug up an SDIO driver for the ESP8089 chip, and found that you can liberate the ESP8266’s SPI bus by removing a flash memory chip that’s taking up the SPI lines. Connect the SPI lines on the ESP8266 to the SDIO lines on the Raspberry Pi, and the rest is taken care of by the drivers. “The rest”, by the way, includes bringing the ESP’s processor up, dumping new firmware into it over the SPI/SDIO lines to convince it to act as an SDIO WiFi adapter, and all the rest of the hardware communication stuff that drivers do.

The result is WiFi connectivity without USB, requiring only some reasonably fine-pitch soldering, and unlike this hack you don’t have to worry about USB bus contention. So now you can add a $2 WiFi board to you $5 computer and you’ve still got the USB free. It’s not as fast as a dedicated WiFi dongle, but it gets the job done. Take that, Hackaday’s own [Rud Merriam]!

A few days ago, one of [Severin]’s SD cards died on him, Instead of trashing the card, he decided to investigate what was actually wrong with the card and ended up recovering most of the data using an Arduino and an immense amount of cleverness.

SD cards can be accessed with two modes. The first is the SDIO mode, which is what cameras, laptops, and other card readers use. The second mode is SPI mode. SPI is slower, but much, much simpler. It turned out the SDIO mode on [Severin]’s card was broken, but accessing it with an Arduino and SPI mode worked. There was finally hope to get files off this damaged card.

[Severin] used a few sketches to dump the data on the SD card to his computer. The first looked at the file system and grabbed a list of files contained on the card. The second iterated over the file system and output all the files in hex over the serial port. With a bit of Python, [Severin] was able to reconstruct a few files that were previously lost forever.

Even though the SD card was completely inaccessible with a normal card reader, [Severin] was able to get a few files off the card. All the sketches and Python scripts are available on the Githubs, ready to recover files from your broken SD cards.