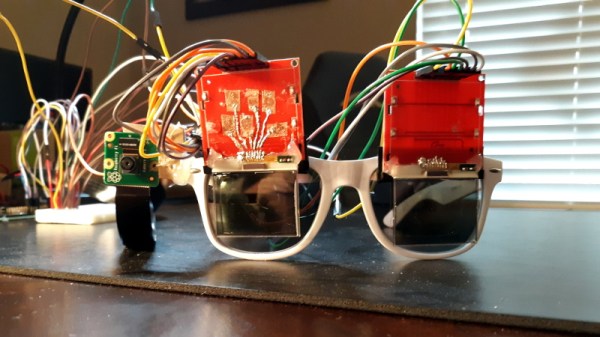 Whether it was rays from the Sun that made a 150 million kilometer trip just to ruin your day or somebody’s unreasonably bright aftermarket headlights, at some point or another we’ve all experienced the discomfort of bright spots in our eyes. But short of wearing welder’s goggles all the time, what can we do? Luckily for us, [Nick Bild] has come up with a solution. Sort of.

By adding LCDs to a pair of standard sunglasses, [Nick] has created something he’s calling “Light Brakes”. The idea is that the LCDs, having their backings removed, can essentially be used as programmable shutters to block out a specific part of the image that’s passing through them. With the addition of a Raspberry Pi and a camera, the Light Brakes can identify an unusually bright source of light and block it from the wearer’s vision by drawing a sufficiently large blob on the LCDs.

At least, that’s the idea. As you can see in the video after the break, the LCDs ability to block out a moving source of light is somewhat debatable. It’s also unclear what, if any, effect the “blocking” would have on UV, so you definitely shouldn’t try looking at the sun with a pair of these.

That said, a refined version of the concept could have some very interesting applications. For instance, imagine a pair of glasses that could actively block out advertisements or other unpleasant images from your field of vision. If this all sounds a bit like something out of an episode of Black Mirror, that’s because it is.

Attentive readers may have noticed that this isn’t the first time these fashionable frames have graced the pages of Hackaday. Over the summer they were used in a very interesting field of view home automation project that [Nick] was working on. This also isn’t the first time he’s stuck a pair of small LCDs in front of his eyes in the name of progress. We’re starting to identify something of a trend here, though we certainly aren’t complaining.

END_OF_DOCUMENT_TOKEN_TO_BE_REPLACED 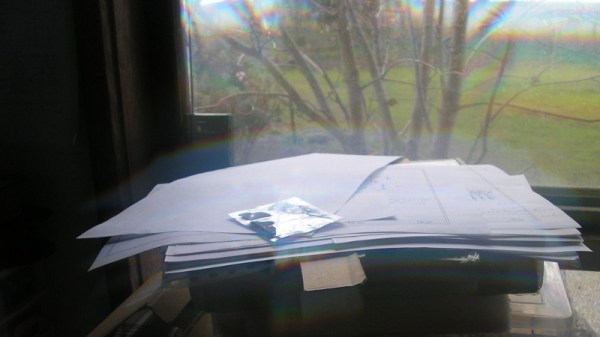 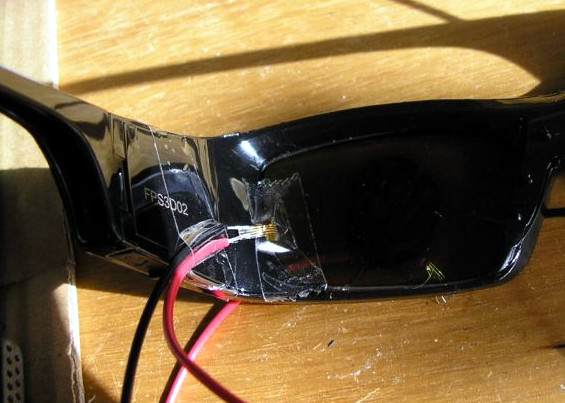 About five percent of the population is colorblind to one degree or another, and for them seeing the entire spectrum from Roy to Biv is simply impossible. Their eyes simply don’t have the cones to detect certain colors. The brain is the weirdest machine on the planet, though, and with the right tricks of light, even the colorblind can see more colors than they’re accustomed to. That’s the idea behind [PointyOintment]’s entry for the 2016 Hackaday Prize: color blindness correcting goggles.

Any device that claims to correct color blindness comes with a few caveats and a slightly loose interpretation of what ‘color blindness correcting’ actually is. For the same reason you can’t see deep infrared, someone with color blindness cannot distinguish between two colors; the eye simply doesn’t have the sensors to see a specific color of light. This doesn’t mean the ability to distinguish color in color blind individuals can’t be improved, though. The EnChroma glasses use an optical notch filter to block all colors between blue and green, and between green and red. This works, because the human brain is weird enough and can adapt to nearly anything.

[PointyOintmen] isn’t going with an optical notch filter. He’s using spinning color discs from a DLP projector and 3D ‘shutter’ glasses to present the world in different shades of color many times a second. It’s weird, untested, and will take a few hours to get used to, but it is a very interesting idea. Will it allow color blind people to see more colors? That’s a semantic issue, but if you define ‘seeing color’ as being able to differentiate between two different colors, yes, it will. [Dino’s] hack this week seeks to create sunglasses that dim based on the intensity of ambient light. The thought is that this should give you the best light level even with changing brightness like when the sun goes behind a cloud or walking from inside to outside. He started with a pair of 3D shutter glasses. These have lenses that are each a liquid crystal pane. The glasses monitor an IR signal coming from a 3D TV, then alternately black out the lenses so that each eye is seeing a different frame of video to create the stereoscopic effect. In the video after the break he tears down the hardware and builds it back up with his own ambient light sensor circuit.

It only takes 6V to immediately darken one of the LCD panes. The interesting thing is that it takes a few seconds for them to become clear again. It turns out you need to bleed off the voltage in the pane using a resistor in order to have a fast response in both directions. Above you can see the light dependent resistor in the bridge of the frame that is used to trigger the panes. [Dino] shows at the end of his video that they work. But the main protective feature of sunglasses is that they filter out UV rays and he’s not sure if these have any ability to do that or not.

END_OF_DOCUMENT_TOKEN_TO_BE_REPLACED [Jonathan Post] has a way to watch 3D video without wearing shutter glasses but it might be kind of a hard product to break into the market. As you can see above, a pair of electrodes are stuck on a viewer’s eyelids, using electricity to alternately close each eye. The video after the break shows a demonstration of this technology. Obviously a camera can’t capture the image that the viewer sees, but this man describes a perfect 3D image. This reminds us of those ab exercisers that use electrodes to stimulate the muscles. Do you think a 3 hour epic would leave your eyelids tired and sore, eventually resulting and a steroid-esque muscle-ridden face?

Edit from [Caleb]: Judging from the comments, some people believe this to be an absolute impossibility. While we concur that this example is pretty silly (what’s powering those electrodes?), we invite you to watch [Daito Manabe]’s facial electrodes fun.