[Revanth Kailashnath] writes in to tell us about an interesting project he and his team have been working on for their “Real Time Embedded Programming” class at the University of Glasgow. Intended to combat the harsh and dangerous winters in Glasgow, their system uses a Raspberry Pi and a suite of sensors to automatically deploy a brine solution to streets and sidewalks. While the project is still only a proof of concept and hasn’t been deployed, the work the team has done so far runs the gamut from developing their own PCBs to creating a web-based user interface. 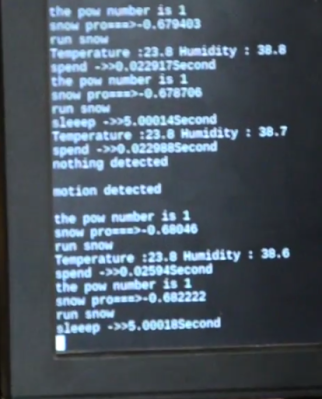 The core idea is simple. If the conditions are right for ice to form, spray salt water. Using salt water is a cheap and safe way of clearing and preventing ice as it simply drops the temperature at which water freezes. The end result is that the ice won’t form until it gets down to 10F (-12C) or so. Not a perfect solution, but it can definitely help. Of course, you don’t want to spray people with salt water as they pass by, so there’s a bit more to it than that.

Using the venerable DHT22 sensor the team can get the current temperature and humidity, which allows them to determine when it’s time to start spraying. But to prevent any wet and angry pedestrians, a HC-SR501 PIR motion sensor is used. If the system sees motion it will stop for a while to let the activity quiet down.

Monitoring the sensors and controlling the pump is done by a daemon written in C++, which also logs data to an SQL database, which in turn feeds their PHP web interface. In the video after the break, [Revanth] demonstrates how the system is constantly making decisions based on the input of the various sensors. Environmental data and motion is analysed every few seconds to provide a real-time solution.

We’ve covered a few projects aimed at melting ice and snow by heating concrete, but it’s interesting to see a “smart” approach to this common winter annoyance.

END_OF_DOCUMENT_TOKEN_TO_BE_REPLACED

Sometimes along comes a tech story that diverges from our usual hardware subject matter yet which just begs to be shared with you because we think you will find it interesting and entertaining.

You will no doubt be familiar with the XKCD cartoon number 327, entitled “Exploits of a Mom”, but familiarly referred to as “[Bobby Tables]”. In it a teacher is ringing the mother of little [Robert’); DROP TABLE Students; –], whose name has caused the loss of a year’s student records due to a badly sanitized database input. We’ve all raised a chuckle at it, and the joke has appeared in other places such as an improbably long car license plate designed to erase speeding tickets.

Today we have a new twist on the Bobby Tables gag, for someone has registered a British company with the name  “; DROP TABLE “COMPANIES”;– LTD“. Amusingly the people at Companies House have allowed the registration to proceed, so either they get the joke too or they are unaware of the nuances of a basic SQL exploit. It’s likely that if this name leaves Her Majesty’s civil servants with egg on their faces it’ll be swiftly withdrawn, so if that turns out to be the case then at least we’ve preserved it with a screenshot.

Of course, the chances of such a simple and well-known exploit having any effect is minimal. There will always be poor software out there somewhere  that contains badly sanitized inputs, but we would hope that a vulnerability more suited to 1996 would be vanishingly rare in 2016.

If by some chance you haven’t encountered it before we’d recommend you read about database input sanitization, someday it may save you from an embarrassing bit of code. Meanwhile we salute the owner and creator of this new company for giving us a laugh, and wish them every success in their venture.

[Michael] was playing with his ESP8266. Occasionally he would notice a WiFi access point come up with, what he described as, “a nasty name”. Perhaps curious about the kind of person who would have this sort of access point, or furious about the tarnishing of his formerly pure airspace, he decided to see if he could locate the router in question.

[Michael] built himself a warwalking machine. His ESP8266 went in along with a GPS module interfaced with a PIC micro controller. It was all housed in an off the shelf case with a keypad and OLED screen. He took his construction for a nice calming war walk around the neighborhood and came home with a nice pile of data to sort through. To save time, he placed the data in a SQL database and did the math using queries. After that it was a quick kludge to put together a website with the Google Maps API and some JavaScript to triangulate the computed results.

Sure enough, the person with the questionable WiFi access point shows up on the map. Apparently Verizon customers are expected to pay for a second data plan if they want to be allowed to use a cellphone as a mobile hotspot. This means one data plan for the phone, and a second for the tethering. [DroidBionicRoot] thinks this is a little silly since there is already a data cap on the phone’s plan. But he’s found a way around it if you don’t mind rooting the phone to enable free tethering.

Not surprisingly it’s a very simple alteration. The phone is already capable of tethering, to enable the feature without Verizon’s permission just edit one database value. In the video after the break, [DroidBionicRoot] starts the process with a rooted Droid Bionic handset. He purchases an app for $2.99 which allows him to edit SQL databases on the handset. From there he navigates to the ‘Settings Storage’ database and changes the ‘entitlement_check’ key value to 0. Reboot the phone and tethering is now unlocked.

END_OF_DOCUMENT_TOKEN_TO_BE_REPLACED

With the weather getting colder, [Daniel] decided it would be a good idea to monitor how much energy his gas heating was using in real time. He used a Nokia 6680 cameraphone to monitor the heater’s flame through the sight glass. PyS60, a Symbian implementation of Python, checks the image sent by the camera and measures how much blue flame is visible. These values are stored in a SQL DB on the phone that can be polled over Bluetooth. At the end of the billing cycle,  he’ll be able to correlate the amount of gas used with what the phone reported.