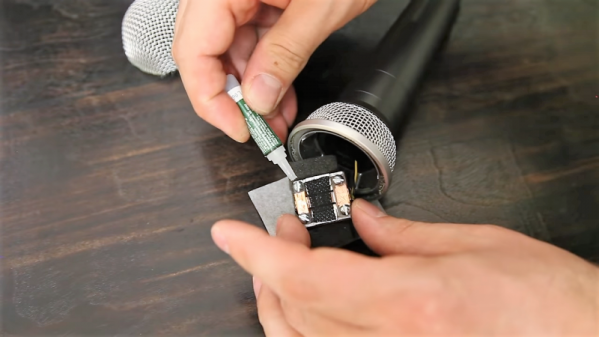 For those with some experience with pro audio, the term “ribbon microphone” tends to conjure up an image of one of those big, chunky mics from the Golden Age of radio, the kind adorned with the station’s callsign and crooned into by the latest heartthrob dreamboat singer. This DIY ribbon mic is none of those things, but it’s still really cool.

Of course the ribbon mic isn’t always huge, and the technology behind it is far from obsolete. [Frank Olsen]’s ribbon mic starts out with gutting a run-of-the-mill studio mic of its element, leaving only the body and connector behind. The element that he constructs, mostly from small scraps of aluminum and blocks of acrylic, looks very much like the ribbon element in commercial mics: a pair of magnets with a thin, corrugated strip of foil suspended between them. The foil was corrugated by passing it through a jig that [Frank] built, which is a neat tool, but he says that a paper crimper used for crafting would work too. There’s some pretty fussy work behind the cartridge build, but everything went together and fit nicely in the old mic body. The video below was narrated using the mic, so we know it works.

Fun fact: the ribbon microphone was invented by Walter Schottky. That Walter Schottky. Need more on how these mics work? Our colleague [Al Williams] has you covered with this article on the basics.

END_OF_DOCUMENT_TOKEN_TO_BE_REPLACED 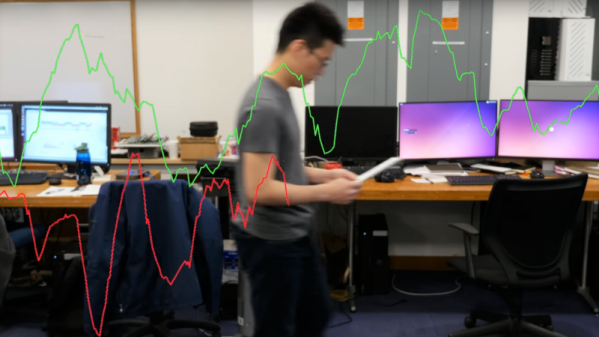 You may not realize it, but how fast a person walks is an important indicator of overall health. We all instinctively know that we lag noticeably when a cold or the flu hits, but monitoring gait speed can help diagnose a plethora of chronic diseases and conditions. Wearables like Fitbit would be one way to monitor gait speed, but the Computer Science and Artificial Intelligence Lab at MIT thinks there’s a better way:  a wireless appliance that measures gait speed passively.

CSAIL’s sensor, dubbed WiTrack (PDF), is a wall-mounted plaque that could be easily concealed as a picture or mirror. It sends out low-power RF signals between about 5- and 7-GHz to perform 3D motion tracking in real time. The WiTrack sensor has a resolution of about 8 cm at those frequencies. With their WiGait algorithms (PDF), the CSAIL team led by [Chen-Yu Hsu] is able to measure not only overall walking speed, but also stride length. That turns out to be critical to predicting the onset of such diseases as Parkinson’s, which has a very characteristic shuffling gait in the early phase of the disease. Mobility impairments from other diseases, like ALS and multiple sclerosis, could also be identified.

WiTrack builds on [Hsu]’s previous work with through-wall RF tracking. It’s nice to see a novel technique coming closer to a useful product, and we’ll be watching to see where this one goes.

END_OF_DOCUMENT_TOKEN_TO_BE_REPLACED 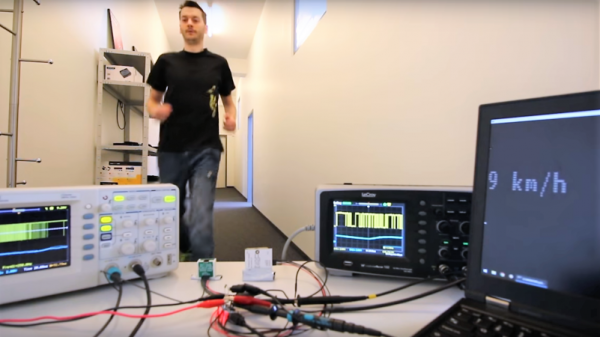 Can you buy a working radar module for $12? As it turns out, you can. But can you make it output useful information? According to [Mathieu], the answer is also yes, but only if you ignore the datasheet circuit and build this amplification circuit for your dirt cheap Doppler module.

The module in question is a CDM324 24-GHz board that’s currently listing for $12 on Amazon. It’s the K-band cousin of the X-band HB100 used by [Mathieu] in a project we covered a few years back, but thanks to the shorter wavelength the module is much smaller — just an inch square. [Mathieu] discovered that the new module suffered from the same misleading amplifier circuit in the datasheet. After making some adjustments, a two-stage amp was designed and executed on a board that piggybacks on the module with a 3D-printed bracket.

Frequency output is proportional to the velocity of the detected object; the maximum speed for the sensor is only 14.5 mph (22.7 km/h), so don’t expect to be tracking anything too fast. Nevertheless, this could be a handy sensor, and it’s definitely a solid lesson in design. Still, if your tastes run more toward using this module on the 1.25-cm ham band, have a look at this HB100-based 3-cm band radio.

END_OF_DOCUMENT_TOKEN_TO_BE_REPLACED This is not a hack. In fact it’s a promotional montage for a collection of scientific equipment that few of us could likely afford. But like yesterday’s giant marionettes over Berlin, sometimes even a costly and delicately-orchestrated achievement transcends its own not-a-hack-ness, fulfilling our brains’ lust for wonderment all the same.

Kurzzeit of Germany produces ballistics measurement equipment. The video depicts various combinations of projectiles and targets at up to one million frames per second, revealing unexpected beauty in hitherto unseen phenomena, and is the best damn ten minutes you will waste on the internet all day!