This scooter starts right up with a shake of your Android device. This shake must be done from front-to-back, because a side-to-side shake is reserved for unlocking the saddle ([Brad] stores his helmet within).

Connectivity is facilitated over Bluetooth, with a rocker switch near the left handle bar to disable the receiver so that you don’t run down the battery. You can see the locking panel hanging open on the front portion of the scooter. Inside he installed the driver board which patches into the ignition system and drives a solenoid for the seat latch. It sounds like the latching mechanism used a bowden cable whose handle was inside that locking panel. By adding a solenoid and generously lubricating the cable he  managed to get it functioning from the driver board.

Check out the video after the break for a proper demonstration. The phone is running a Python script via SL4A, which takes care of the user interface.

END_OF_DOCUMENT_TOKEN_TO_BE_REPLACED 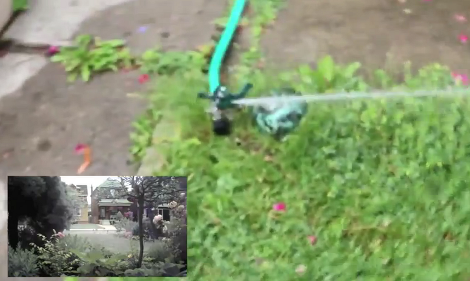 Don’t want dogs pooping on the front lawn? You could put up a sign, your could chase them away like a crotchety old miser, or you could build a motion detecting sprinkler system. It’s pretty hard to line up for a doody when you’re getting sprayed in the face (or worse) with cold water.

The setup is pretty simple. The bump-in image above shows the view from a webcam. The server monitoring the video is running software that detects motion between one frame and the next. When it sees something in the right position it signals an Arduino to trigger the solenoid which has been holding back the water. Check out the movie after the break which shows [Phil Tucker] tramping across the grass to trigger the  trap.

Sprinkler hacks are always a lot of fun. This variable-range sprinkler is still one of our favorites.

END_OF_DOCUMENT_TOKEN_TO_BE_REPLACED We like what we’re seeing and hearing with [Dorian Damon’s] newest version of the Potentar. This is revision 2.0 of the instrument we saw in a December links post. He calls it the Potentar, since it uses a linear potentiometer in a way similar to how the frets on a guitar work (Potentiometer + Guitar = Potentar).

The first thing you should notice is the case upgrade. The original used what looked like unfinished scrap wood, but finished wood of this case really makes the thing look like a traditional instrument. With this design he loses the Arduino in favor of a standalone ATmega328 chip. You’ll notice knobs and a switch on the face of the body. This allows for selecting a couple different kinds of scales and turning the power off. The linear potentiometer and sewing machine button are the same as before. After the break you can catch his description and a quick performance thanks to the audio jack for patching it into an amp.

END_OF_DOCUMENT_TOKEN_TO_BE_REPLACED

I have heard the joke several times that a light saber would make a great bug zapper. However, when [Ricky Sumbody] requested it on Facebook, I thought “why not?”. [Ricky] made a common mistake, he thought the bulb was the part that actually zaps the bugs. A quick google search revealed that many people had the same thought. I decide that, even though building a functional bug zapping light saber might not look as cool, I was going to do it anyway.

If you’re going to follow these instructions, be aware that this is a device that is literally designed to shock things to death.  It is dangerous.

END_OF_DOCUMENT_TOKEN_TO_BE_REPLACED