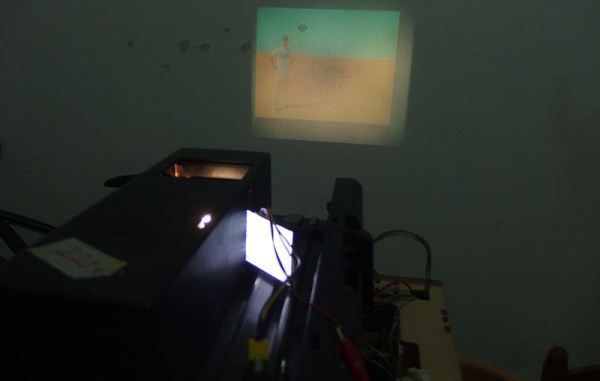 The Cairo hackerspace needed a projector for a few presentations during their Internet of Things build night, and of course Friday movie night. They couldn’t afford a real projector, but these are hackers. Of course they’ll be able to come up with something. They did. They found an old slide projector made in West Germany and turned it into something capable of displaying video.

The projector in question was a DIA projector that was at least forty years old. They found it during a trip to the Egyptian second-hand market. Other than the projector, the only other required parts were a 2.5″ TFT display from Adafruit and a Nokia smartphone.

All LCDs are actually transparent, and if you’ve ever had to deal with a display with a broken backlight, you’ll quickly realize that any backlight will work, like the one found in a slide projector. By carefully removing the back cover of the display, the folks at the Cairo hackerspace were able to get a small NTSC display that would easily fit inside their projector.

After that, it was simply a matter of putting the LCD inside the display, getting the focus right, and mounting everything securely. The presentations and movie night were saved, all from a scrap heap challenge.

Hackaday Prize judge, hacker extraordinaire, and generally awesome dude [Sprite_TM] spends a lot of time at his computer, and that means a lot of time typing on his keyboard. He recently picked up a board with the latest fad in the world of keyboards, a board with individually addressable LEDs. He took this board to work and a colleague jokingly said, ‘You’ve had this keyboard for 24 hours now, and it has a bunch of LEDs and some arrow keys. I’m disappointed you haven’t got Snake running on it yet.” Thus began the quest to put the one game found on all Nokia phones on a keyboard.

The keyboard in question is a Coolermaster Quickfire Rapid-I, a board that’s marketed as having an ARM Cortex CPU. Pulling apart the board, [Sprite] found a bunch of MX Browns, some LEDs, and a 72MHz ARM Cortex-M3 with 127k of Flash and 32k of RAM. That’s an incredible amount of processing power for a keyboard, and after finding the SWD port, [Sprite] attempted to dump the Flash. The security bit was set. There was another way, however.

Coolermaster is actively working on the firmware, killing bugs, adding lighting modes, and putting all these updates on their website. The firmware updater is distributed as an executable with US and EU versions; the EU version has another key. Figuring the only difference between these versions would be the firmware itself, [Sprite] got his hands on both versions, did a binary diff, and found only one 16k block of data at the end of the file was different. There’s the firmware. It was XOR encrypted, but that’s obvious if you know what to look for.

The firmware wasn’t complete, though; there were jumps to places outside the code [Sprite] had and a large block looked corrupted. There’s another thing you can do with an executable file: run it. With USBPcap running in the background while executing the firmware updater, [Sprite] could read exactly what was happening when the keyboard was updating. With a small executable that gets around the weirdness of the updater, [Sprite] had a backup copy of the keyboard’s firmware. Even if he bricked the keyboard, he could always bring it back to a stock state. It was time to program Snake.

The first part of writing new firmware was finding a place that had some Flash and RAM to store the new code. This wasn’t hard; there was 64k of Flash free and 28K of unused RAM. The calls to the Snake routine were modified from the variables the original firmware had. If, for example, the original keyboard had a call to change the PWM, [Sprite] could change that to the Snake routine.

Snake is fun, but with a huge, powerful ARM in a device that people will just plug into their keyboard, there’s a lot more you can do with a hacked keyboard. Keyloggers and a BadUSB are extremely possible, especially with firmware that can be updated from a computer. To counter that, [Sprite] added the requirement for a physical condition in order to enter Flash mode. Now, the firmware will only update for about 10 seconds after pressing the fn+f key combination.

There’s more to playing Snake on a keyboard; Sprite has also written a new lighting mode, a fluid simulation thingy that will surely annoy anyone who can’t touch type. You can see the videos of that below.

END_OF_DOCUMENT_TOKEN_TO_BE_REPLACED 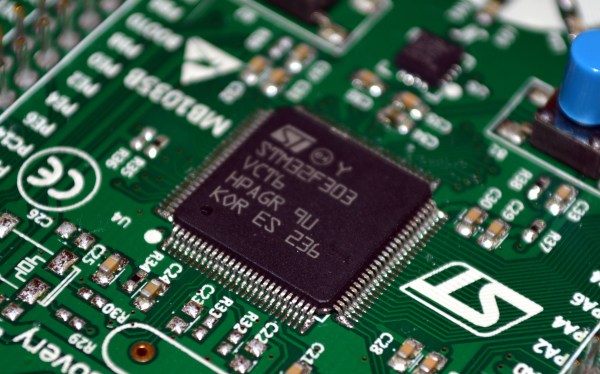 Once you venture beyond the tame, comfortable walls of the 8-bit microcontroller world it can feel like you’re stuck in the jungle with a lot of unknown and oft scary hazards jut waiting to pounce. But the truth is that your horizons have expanded exponentially with the acceptable trade-off of increased complexity. That’s a pretty nice problem to have; the limitation becomes how much can you learn.

Here’s a great chance to expand your knowledge of the STM32 by learning more about the system clock options available. We’ve been working with STM32 chips for a few years now and still managed to find some interesting tidbits — like the fact that the High Speed External clock source accepts not just square waves but sine and triangle waves as well, and an interesting ‘gotcha’ about avoiding accidental overclocking. [Shawon M. Shahryiar] even covers one of our favorite subjects: watchdog timers (of which there are two different varieties on this chip). Even if this is not your go-to 32-bit chip family, most chips have similar clock source features so this reading will help give you a foothold when reading other datasheets.

There is a clock diagram at the top of that post which is small enough to be unreadable. You can get a better look at the diagram on page 12 of this datasheet. Oh, and just to save you the hassle of commenting on it, the chip shown above is not an f103… but it just happened to be sitting on our desk when we started writing. 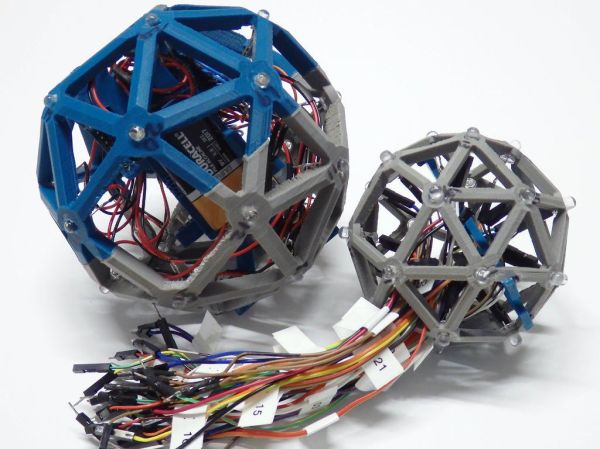 Tired of balls that are just balls, and not glowing geometric constructions of electronics and wonderment? Get yourself an IcosaLEDron, the latest in Platonic solids loaded up with RGB LEDs.

The folks at Afrit Labs wanted a fun, glowy device that would show off the capabilities of IMUs and MEMS accelerometers. They came up with a ball with a circuit board inside and twenty WS2812B RGB LEDs studded around its circumference

The frame of the ball is simply a set of twenty tessellated triangles that can be folded up during assembly. The outer shell of the ball is again printed in one piece, but fabricated out of transparent NinjaFlex, an extraordinarily odd, squishy, and likely indestructible material.

Inside the IcosaLEDron is a PCB loaded up with an ATMega328p, an accelerometer, a LiPo battery charger, and quite a bit of wiring. Once the ball is assembled and locked down, the squishy outer exterior is installed and turned into a throwable plaything.

If 20 sides and 20 LEDs aren’t enough, how about a an astonishing 386-LED ball that’s animated and knows its orientation? That’s a project from Null Space Labs, and looking at it in person is hypnotic.

A few months ago, the ESP8266 came onto the scene as a cheap way to add WiFi to just about any project that had a spare UART. Since then, a few people have figured out how to get this neat chip running custom firmware, opening the doors to an Internet of Things based around an ESP8266. [Marc] and [Xavi] just wrote up a quick tutorial on how to turn the ESP8266 into a WiFi sensor platform that will relay the state of a GPIO pin to the Internet.

If you’re going to replicate this project, you won’t be using the stock firmware on the ESP. Instead of the stock firmware, [Marc] and [Xavi] are using the Lua-based firmware that allows for access to a few GPIOs on the device and scripting support to make application development easy. To upload this firmware to the ESP, [Marc] and [Xavi] needed a standard FTDI USB to serial converter, a few AT commands through a terminal program, and a few bits of wire.

The circuit [Marc] and [Xavi] ended up demoing for this tutorial is a simple webpage that’s updated every time a button is pressed. This will be installed in the door of their hackerspace in Barcelona, but already they have a great example of the ESP8266 in use.