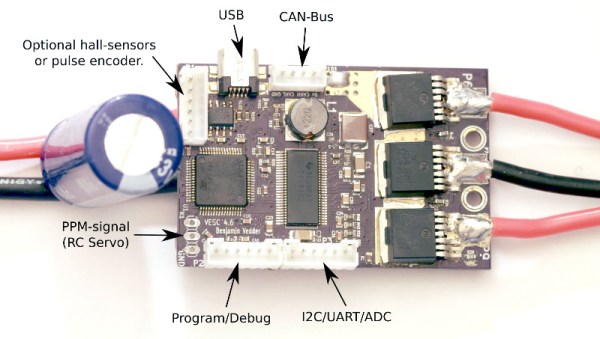 For electric and remote control vehicles – from quadcopters to electric longboards – the brains of the outfit is the Electronic Speed Controller (ESC). The ESC is just a device that drives a brushless motor in response to a servo signal, but in that simplicity is a lot of technology. For the last few months, [Ben] has been working on a completely open source ESC, and now he’s riding around on an electric longboard that’s powered by drivers created with his own hands. 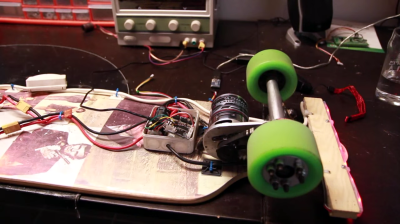 The ESC [Ben] made is built around the STM32F4, a powerful ARM microcontroller that’s able to do a lot of computation in a small package. The firmware is based on ChibiOS, and there’s a USB port for connection to a sensible desktop-bound UI for adjusting parameters.

While most hobby ESCs are essentially black boxes shipped from China, there is a significant number of high performance RC pilots that modify the firmware on these devices. While these new firmwares do increase the performance and response of off-the-shelf ESCs, building a new ESC from scratch opens up a lot of doors. [Ben]’s ESC can be controlled through I2C, a UART, or even a CAN bus, greatly opening up the potential for interesting electronic flying machines. Even for ground-based vehicles, this ESC supports regenerative braking, sensor-driven operation, and on-board odometry.

While this isn’t an ESC for tiny racing quadcopters (it’s complete overkill for that task) this is a very nice ESC for bigger ground-based electric vehicles and larger aerial camera platforms. It’s something that could even be used to drive a small CNC mill, and certainly one of the most interesting pieces of open source hardware we’ve seen in a long time.

END_OF_DOCUMENT_TOKEN_TO_BE_REPLACED

Holy *#$&. That just about sums up the 2015 RedBull Creation Competition. It was fantastic. Where else could you ride a gasoline engine powered tire-swing-of-death, complete with fireball launcher? Well… maybe Burning Man…

Anyway, was it a hackathon? No, this was a build-a-thon. A few Arduinos and Atmel’s may have been used, but the majority of the projects were serious mechanical marvels. The teams had 72 hours to compete, with the very broad theme of “Serious Fun”.

And did they make some serious fun. From human-sized hamster wheels, to glass smashing recycling machines, and even an arcade style carnival game housed in a dumpster, not one team had a similar idea about Serious Fun. It was awesome.

END_OF_DOCUMENT_TOKEN_TO_BE_REPLACED 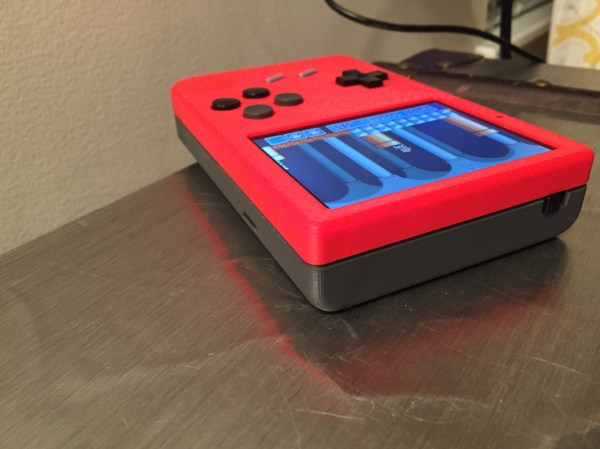 When the ever-versatile Raspberry Pi was released, the potential for cheap video game emulation was immediately obvious. Some of the very first Raspi projects to hit the internet were arcade cabinets, and it wasn’t long until people were making them portable. A purpose-build Linux distort called RetroPie has become very popular specifically because of the Raspi’s game-emulation potential. However, the actual hardware for these emulation systems isn’t always the most aesthetically (or ergonomically) pleasing. That’s where reddit user [Cristov9000] has managed to stand out from the crowd.

[Cristov9000] accomplished this by combining high-quality design (and 3D printing) with the careful use of original Nintendo parts. Game Boy and SNES buttons and elastomers were used to achieve the correct button feel. Other original Game Boy parts, like the volume wheel and power switch, ensure that the system feels as much like 1989 OEM hardware as possible.

Also impressive is the internal hardware, including 3 custom PCBs used to tie everything together to work via the Raspberry Pi 2 GPIO pins. The display is a 3.5″ TFT screen, and with the 6000 mAh it can handle gameplay for more than 7 hours. Other details, like the integrated mono speaker and rear shoulder buttons complete the experience. Combined with the RetroPie and an assortment of emulators, this is one of the most impressive portable gaming builds we’ve seen, especially among a crowded list of awesome raspi-based Game Boy builds.

END_OF_DOCUMENT_TOKEN_TO_BE_REPLACED

Worried about bringing a project to demo at CCC15 (The Chaos Communication Camp), [Anthony Liekens] had to act fast. He would have brought his giant Flying Spaghetti-Monster Display (FSM for short), but unfortunately it wouldn’t fit in his car. So, looking around his garage he realized he had a pile of extra RGB LEDs, and a broken iCade Core. The gears in his head started turning and he came up with the idea for the HEXXX Gaming Console.

So what is it? It’s a hexagonal console designed for three-person gaming — like his Tron for Three and Pong for Three — he even has a 6 player Flappy Bird clone! From conception to reality, it took a mere ten stressful evenings to complete… The end result is quite fantastic. END_OF_DOCUMENT_TOKEN_TO_BE_REPLACED

Hardware and software combined, Arduino does many things right. It lowers the entry level into embedded systems development with a nifty hardware abstraction layer. It aims for cross-platform compatibility by supporting Windows, Mac OSX, and Linux operation systems. It throws out the need for an external programmer to get you up-and-blinkin’ those LEDs quickly.

One thing most of us never cease to curse about, though, is the IDE. Many have cried out wildly against the Java-based text-editor for its cryptic compiling-and-linking process, its inability to accommodate bare C or C++ source files, and (shh!) its lack of Vim keybindings. Fortunately, our cries have been heard, and the like many community-based projects, the community fights back with a custom solution.

Calling all Grumpy Engineers: The Arduino-Makefile

What began as [Sudar’s] lightweight program to escape the IDE has become a fully-blown, feature rich Makefile that has evolved and adapted to grow with the changes of Arduino. With a community of 47 contributors, the Makefile enables you to escape from the IDE entirely by writing code in the cushy text editor of your choice and compiling with a simple incantation of make into your terminal, be you in Linux, Mac, or Windows.

Without further ado, let’s take a walking tour of the project’s highlights.