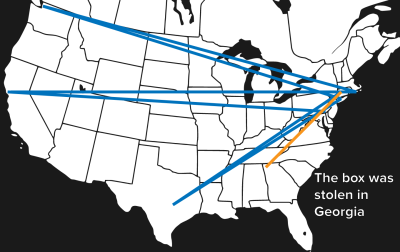 We know what you’re thinking – case modding is so 2004. You can forget all the silly paint jobs, windows, and lighted spinning fans that’s you’ve seen in the past. That all seems like child’s play compared to what [Complx] has created over on the overclock.net forum.

Using a mixture of 3D-printed plastic corners and a laser-cut acrylic top, bottom and sides, [Complx] was able to create a very pleasing design. He didn’t have access to a 3D printer large enough that would make the parts, though, so he decided to outsource that task. His first set of parts were printed on a Makerbot Replicator, but came out too coarse and so he set out to find a better printing method. After getting quotes of $2000 or more, he was about to call it quits when he found someone with Stratasys Fotus 250 who was willing to work with him on the price, but still provide a quality print.

We have to commend [Complx] on his documentation, photos and videos.  It really makes this build shine. You can watch an 3d animation of the build after the break.

END_OF_DOCUMENT_TOKEN_TO_BE_REPLACED 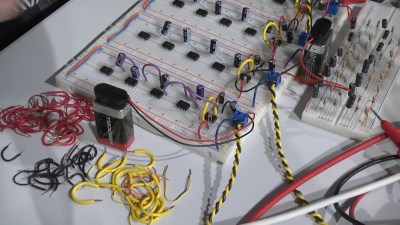 By all accounts, the ARM architecture should be a forgotten footnote in the history of computing. What began as a custom coprocessor for a computer developed for the BBC could have easily found the same fate as National Semiconductor’s NS32000 series, HP’s PA-RISC series, or Intel’s iAPX series of microprocessors. Despite these humble beginnings, the first ARM processor has found its way into nearly every cell phone on the planet, as well as tablets, set-top boxes, and routers. What made the first ARM processor special? [Ken Shirriff] potsed a bit on the ancestor to the iPhone.

The first ARM processor was inspired by a few research papers at Berkeley and Stanford on Reduced Instruction Set Computing, or RISC. Unlike the Intel 80386 that came out the same year as the ARM1, the ARM would only have a tenth of the number of transistors, used one-twentieth of the power, and only use a handful of instructions. The idea was using a smaller number of instructions would lead to a faster overall processor.

This doesn’t mean that there still isn’t interesting hardware on the first ARM processor; for that you only need to look at this ARM visualization. In terms of silicon area, the largest parts of the ARM1 are the register file and the barrel shifter, each of which have two very important functions in this CPU.

The first ARM chip makes heavy use of registers – all 25 of them, holding 32 bits each. Each bit in a single register consists of two read transistors, one write transistor, and two inverters. This memory cell is repeated 32 times vertically and 25 times horizontally.

The next-largest component of the ARM1 is the barrel shifter. This is just a device that allows binary arguments to be shifted to the left and right, or rotated any amount, up to 31 bits. This barrel shifter is constructed from a 32 by 32 grid of transistors. The gates of these transistors are connected by diagonal control lines, and by activating the right transistor, any argument can be shifted or rotated.

In modern terms, the ARM1 is a fantastically simple chip. For one reason or another, though, this chip would become the grandparent of billions of devices manufactured this year.

With the announcement of the verification of discovery for these elements, they will get a name. Currently elements 113, 115, 117, and 118 are known as Ununtrium, Ununpentium, Ununseptium, and Ununoctium, respectively. What these elements will be named depends on the proposals by the discoverers of these elements.

Element 113 was discovered by researchers at the RIKEN laboratory in Japan, and these researchers will be able to propose a name and atomic symbol for their discovery. Elements 115, 117, and 118 were discovered through a partnership between the Joint Institute for Nuclear Research in Dubna, Russia, Lawrence Livermore National Laboratory in California, and Oak Ridge National Laboratory in Oak Ridge, Tennessee. Researchers at these three laboratories will propose names and atomic symbols for these three elements.

It should be noted that Lawrence Livermore National Laboratories and the Joint Institute for Nuclear Research in Dubna each have their own element named after them: Lawrencium and Dubnium, with atomic numbers 103 and 105, respectively. Having element 113, 115, and 118 named after Oak Ridge National Laboratory wouldn’t be a bad proposal, and would be rather fitting given the laboratory’s influence on the last half-century of physics.

Of particular interest is the naming of element 118. Because element 118 falls within group 18 of the periodic table, it is a noble gas, with a particular naming pattern. each of the elements in group 18 end with the suffix ~on, instead of the suffix for the rest of the periodic table, ~ium (helium is the exception to this rule due to historical precedent). Whether element 118 will use the ~on or ~ium suffix is up to debate; current IUPAC rules say all new elements should end with ~ium, but recommendations have been published to name all group 18 elements with the ~on suffix.

This is not the end of the periodic table by any means. It is possible that elements with higher atomic numbers can be synthesized. However, experiments to synthesize element 119 have so far come up short, and the predicted properties of element 119 put it at the limits of what current technology is able to detect.

By 2016, most people have got the hang of doing SMD soldering in the garage–at least for standard packaging. Ball Grid Array or BGA, however, remains one of the more difficult packages to work with [Colin O’Flynn] has an excellent video (almost 30-minutes, including some parts that are sped up) that shows exactly how he does a board with BGA.