[Scott Swaaley] needed a bunch of timing pulleys for the clock he was building. He had already decided on the MXL profile, but he needed so many of these toothed pulleys in so many configurations (hex-bored, hubless) that it would blow out his budget. Plus, he wanted them transparent as well. So why not just laser them out of acrylic?

Not finding anything useful on the manufacturers’ sites, [Scott] decided to create his own web application to generate the shapes and download them as SVGs, dreaming of a resource like Gear Generator except for timing pulleys instead of involute spur gears. [Scott] has the application running on his GitHub. You can create MXL, XL, and L pulleys with any number of teeth and any hole size. From there you can output as an SVG and laser or mill the pulley.

There’s a lot of potential for projects made with pulleys and we’ve covered them extensively. Check out a 3D-printed strain wave gear, an inexpensive XY table, and even a remote operated gate for more pulley ideas.

The ESP32 is the successor to the wildly popular ESP8266. There seems to be no end to what the chips can do. However, despite all the wireless communication capabilities, the module doesn’t have a display. [G6EJD] wanted to connect an ILI9341 TFT display and he put the code and information on GitHub. You can also see a video of his work, below.

Since the display uses a serial interface, there isn’t much wiring required. The Adafruit GFX library does the heavy lifting, utilizing the SPI library for the actual communications. The first demo shown on the hardware can pull weather data decoded. If you want more details on the display’s operation, check out [G6EJD’s] YouTube channel and you’ll find other videos that go into more detail.

We’ve seen these displays married to an ESP8266 with an integrated PCB, too. There’s a choice of libraries, and perhaps we’ll see a similar range of choice for the ESP32.

END_OF_DOCUMENT_TOKEN_TO_BE_REPLACED 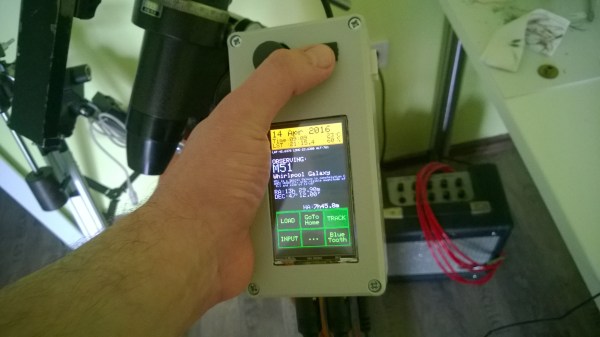 [Dessislav Gouzgounov] wanted to build a small piece of hardware — a GoTo for his telescope. This handheld controller would allow him to use software to align the telescope with whatever celestial body he’s checking out.

Many GoTos simply interface with a laptop, but [Dessislav] built a standalone system centered around an Arduino Due and 240×400 touch screen, with GPS, RTC, and Bluetooth under the hood. It works on both hemispheres and contains a database of 250 celestial objects, features different speeds for time-delayed tracking of celestial, lunar, and solar phenomena, and it can work with any stepper-equipped telescope.

We covered [Dessislav]’s previous version of the RDuinoScope, but he’s improved the project considerably with over 2,400 lines of code including a new menu system and added a star atlas showing the location of the sky at which the telescope is currently pointed, among other improvements. The project is open source and you can learn more about it on [Dessislav]’s project page or check out his code on GitHub.

END_OF_DOCUMENT_TOKEN_TO_BE_REPLACED 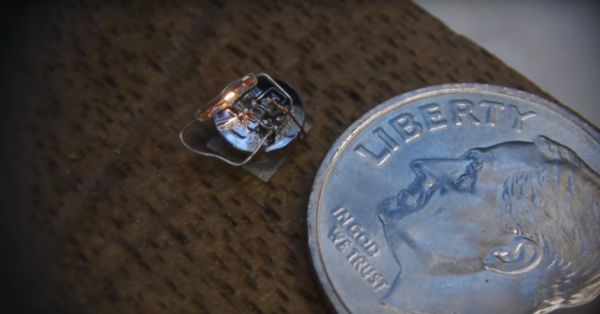 We’re going to go out on a limb here and declare this minuscule incandescent light flasher the smallest such circuit in the world. After all, when you need a microscope to see it work, you’ve probably succeeded in making the world’s smallest something.

Even if it’s not record breaking, [Ben Krasnow]’s diminutive entry in the 2017 Flashing Light Contest, which we recently covered, is still pretty keen. For those not familiar with the contest, it’s an informal challenge to build something that electrically switches an incandescent light on and off in the most interesting way possible for the chance to win £200. [Ben] says he’ll donate the prize money to a STEM charity if he wins, and we’d say he has a good chance with this flea-sized entry.

The incandescent lamp he chose is a specialty item for model makers and scale railroad enthusiasts; we’d heard of “grain of wheat” bulbs before, but this thing is ridiculous. The bulb makes the 4.6 mm diameter SR416 hearing aid battery that powers the flasher look enormous. The driver is a clever Schmitt trigger inverter with a tiny RC network to flash the bulb at about 1 Hz. The video below shows the flasher working and details the development and the build, which featured spot welding to the battery. [Ben] has even spec’d precisely how many Joules of energy will rupture the thing steel cases on these cells — we suspect involuntarily through trial and error.

[Ben]’s entry in the contest is now our favorite, and not just because he’s been a great friend to Hackaday with such classic hacks as watching a phonograph needle with an electron microscope and a homebrew CT scanner. This circuit is genuinely fascinating, and we hope it inspires you to try to top it. There’s a little less than a month left in the contest, so get to it.

END_OF_DOCUMENT_TOKEN_TO_BE_REPLACED 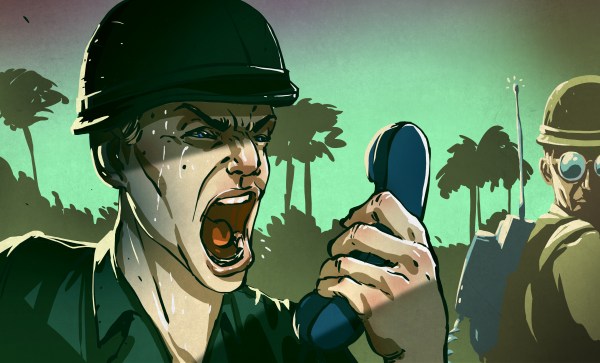 END_OF_DOCUMENT_TOKEN_TO_BE_REPLACED

Had enough of fidget spinners yet? If you haven’t heard, a toy that consists of a bearing in the center of a multi-lobed flat structure that’s designed to spin around the bearing’s axis with little force has taken the world by storm. Usually, these devices are about 10cm in diameter or less. But, everything is bigger in Texas. So, naturally, students from the University of Texas at Dallas got to work making the largest fidget spinner in the world.

Clocking in at 150 pounds and 45 inches in diameter, this thing is undeniably huge. The structure is made out of what looks to be veneered plywood glued together to make a ~2.5in thick structure to put their bearings in. And, after washing their bearings with soapy water, the students get to work press fitting their 2.2in by 10.5in ball bearings into their painted wooden structure. Their video embedded below is an entertaining watch, it starts with a gag, but moves on the project afterwards.